Interview with the Steve Satchel Band – In Pursuit of Happiness 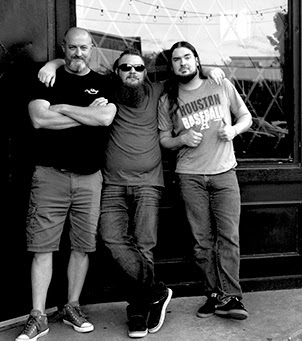 Carox: What is the name of the new album?
Adam: Pursuit of Happiness which follows in from what Lance is saying…the whole reason we play this music is because it makes us very happy. We never skip a rehearsal. I have never had a moment where I don’t want to go to rehearsal which you get with so many bands.
Jason : We are four friends that like to write music!
Carox: How many tracks are there on the album and where can people buy it?
Adam: There are seven. It is coming out on September fourteenth (congratulations guys) and physicals are on the way. But you will be able to stream everything on Itunes, Spotify, whatever your format is – Geezer – all that stuff.
Carox: What are some of the tracks you are really proud of?
Adam: Well all of them. Literally the other night we were rehearsing for a couple of shows that had longer sets. And every time we revisit an older song we think man, that’s our favorite again. If I had to pick one it would be all seven.
Lance: My personal favorite is “I have been alive my whole life”. It is always really funny when we are trying to pick a set list and decide what to keep or leave. There are only 7 songs on the album but in total I think we have 18 songs as a band not including some that are not finished yet. …there are a few songs we have been pulling out recently that we haven’t played in 2 years. Then suddenly we pull it out and I am like, there’s my favorite song again…why did we ever stop playing this song? My favorite song is Desert. That was one of the first songs that me, Adam and Jason ever had a full impact with the songwriting on six years ago. That song stayed in just about every set we play and it had evolved it is not the same song..it is all over the place in a really good musical way but I love that song… if I had to pick a favorite that would be it.
Carox: Obviously you have fans. What is it that makes them special? What would you like to say?
Lance: Thank you. If you ever came to a Steve Satchel show and sat through all that craziness thank you!
Adam: Of course we are really a very niched musical idea with the musical guitar thing but we play all kinds of genre in our set so it grabs a lot of people’s attention. We play a hard rock kinda thing that goes to fusing jazz, then we play heavy metal that goes straight to country western...we have something for everyone musically minus the vocals.
Lance: You have to have a pretty good respect for music and musicians, in general, to sit through a Satchel show. If you like Satchel you probably like all different kinds of music! That is what makes it special.
Adam: And going back to the band name Steve Satchel and the inspiration behind the band name, .Of course all guitarists like playing the stuff they have been practicing in their bedroom for years but the hardest part is making something that is memorable You have to write a vocal melody with your guitar. and it’s awesome when people remember our melody.
Carox: You don’t have a problem retaining interest. I have been to your shows and people like it.
Lance: That is something that I am probably most proud of. When we talked about what does a drummer see when I am back there playing... With Satchel when I look up I see people smiling. What I realize is that we are all having a good time and we are probably oblivious to what is going on in front of use. These songs are infectious. I think that people see us all having a good time they all have a good time too!
Band Links: http://reverbnation.com/thestevesatchelband/, https://www.youtube.com/user/whoisstevesatchel/
Catch this band at:
September 29th Leon’s Lounge
October 13th ALs sports bar ( album release show)
December 12th Scout Bar

Band Members are: Steve Satchel – Everything, Adam Denoth - Guitar/ Lead Spoons, Lance Klepper - Drums/ Lead Flute, Jason Beard - Bass/ Lead Triangle, Jeremiah Shipley - Other Guitar/ Lead Washboard
Record Label :SS&OTJB Inc.
Biography : The Steve Satchel Band is Houston's Premier Instrumental Guitar Rock band. High energy Rock N Roll with guitar flair, rockin bass and thundering drums. Musicianship at its finest. The music and melodies will have you hooked the second you hear it. Before you know it, you will be humming the songs all day long. The Steve Satchel Band has not been around for long but in such a short time they have built a following and conquered the local music scene and have opened for many Music legends such as: John 5, Tony MacAlpine, Dug Pinnick, King's X and many more.Now, you may be asking yourself... Who is Steve Satchel??? Well, he is actually someone you know. Someone you don't know but you know of, or know about... He invented trends, started genres of music, developed instruments and has conquered the world but no one actually knows he did all of this. He has been in the shadows throughout his whole life and now it is his turn to shine! This group of musicians was assembled by Steve Satchel to perform his music, Real American Rock 'N Roll( that just so happens to be instrumental guitar music.