September 09, 2018
By: Linette Britt
Thrilled to announce that the October 11th  Greta Van Fleet show at The Sylvee, Madison, WI is sold out. Wisconsin knows great new music!There has been a lot of talk about these four young men, three of them brothers,  and their throwback sound. With a majestic sound the likes of Led Zeppelin, and the swagger to match, they are a young band that is sincere in their hopes to make their own mark.
Currently the band two EP’s out and on are on the cusp of delivering their first full-length 10 song LP.  People around the industry are looking at this forthcoming release to see what they will build from here. Their talent is undeniable, as is their passion and intensity. Their live shows can be described as  giant walls of sound with savage guitar shreds, crushing drums and Josh’s dynamic howls and wails that shake you and draw you into a fervor. Much like lightening in a bottle, they have captured something elusive and powerful, and are now showing it off to the world.
I look forward to seeing them deliver a smashing performance, cutting their teeth on their first major tour.  The band have set out on a worldwide Fall tour that started in Seattle WA and ends in November in Manchester, UK.  More info on dates and tickets for N. America , Europe and Asia can be found on their website.Their new album will be out shortly after, on October 19th, entitled  ‘Anthem of a Peaceful Army’ on Lava/Republic Records. Pre-ordering available now here :  http://www.gretavanfleet.com 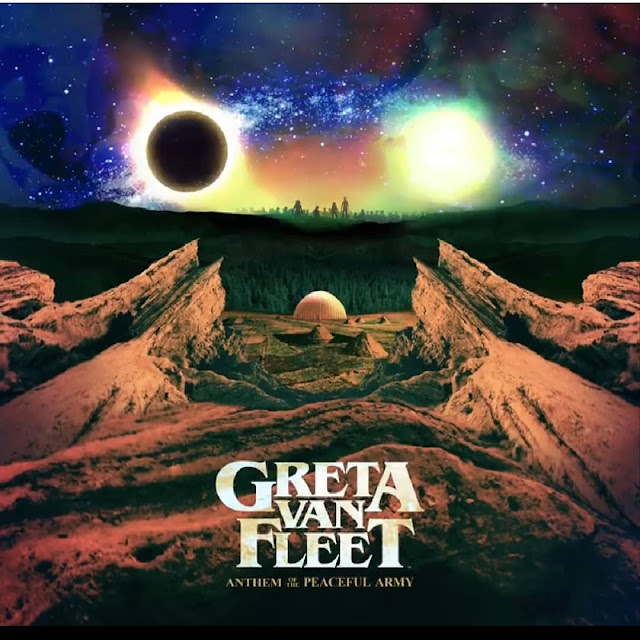 You can listen to the recently released “Watching Over” from the upcoming album here :
https://open.spotify.com/album/5drm3wLjSo4Uvpk1riFe1l