This Month's Horror Show Review: The Devil and Father Amorth


More than four decades after directing the groundbreaking horror flick The Exorcist (originally released in 1973), director William Friedkin returns to the possession genre he helped found with of all things a documentary about exorcism titled The Devil and Father Amorth. Seemingly inspired by recent books on exorcists, the most popular being Matt Baglio’s The Rite: The Making of a Modern Exorcist (which led to the movie The Rite, starring Anthony Hopkins), Friedkin goes to Italy and engages with one Father Amorth, who supposedly has done “thousands” (likely hundreds) of exorcisms on people who claim to be possessed by a devil, demon, or evil spirit. Shot professionally but with a somber tone and a barebones budget, the documentary clocks in at slightly over an hour and actually raises more questions than it answers.


The documentary begins with an overview of the movie The Exorcist and the real case that inspired it. Footage of author William Peter Blatty (the novel’s writer and the movie’s screenwriter) and others then lead up to the short flick’s real show, a video shoot by Friedkin in 2016 that shows a real-life exorcism executed by Father Amorth, a jovial yet serious priest who has been battling Satan and his evil minions for most of his life. The possessed, in this case, is a single woman by the name of Christina, who is restrained by her boyfriend and another assistant while the rest of her family watched on. The exorcism itself gets started in earnest, with the priest reading from a little card. Interestingly, Father Amorth does not read from the Bible’s “Right of Exorcism,” instead of reciting traditional prayers and calling upon archangels to help rid the woman of the thing that has possessed her (no mentioned of Christ, the only one who can actually exorcise demons). The possessed woman then brings forth a hideous voice from deep inside. She thrashes about, but there is no paranormal activity otherwise. 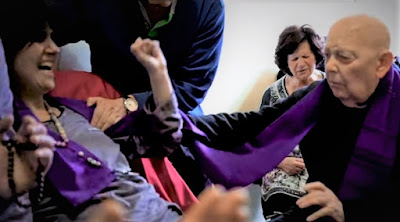 Christina has been exorcised many times, and this video is yet another one. The exorcism appears successful, but when Christina’s mother and father are being blessed after the ordeal, the demon makes its presence again, indicating yet another failure.


The movie then switches to a series of interviews of medical and psychological experts. What is interesting is that many of these experts are open to the idea of “possession,” although they do not stray into the realm of philosophical mores (good and evil) or the supernatural (demons exist). However, they do attempt to explain possible ways that people actually believe they are possessed, but the interviews really don’t dig deep enough, which is likely to leave the bulk of viewers unsatisfied.


One particularly disturbing snippet from Friedkin comes toward the end of the film when he reveals that Father Amorth has passed away. Fearing that Christina is still possessed, she reached out to her and asks for an interview. Friedkin agrees to meet her inside a church, but without any filming equipment. Supposedly, at this meeting Christina’s boyfriend demands the exorcism footage back, fearing that it will only strengthen the evil inside his girlfriend. Christina’s demon once again takes over and says that it wants the image released. None of this is recorded—viewers must take Friedkin’s narration as the only evidence.


Although I rather enjoyed the film as a whole, the documentary really provides no definitive answers regarding possession. However, it does validate, in a sense, the recent books on the subject, particularly Baglio’s, which explains that exorcisms rarely succeed once and that priests often battle the same demons or forces in the name of the Roman Catholic Church, which demands that those who claim to be possessed must be examined medically and psychologically before a sanctioned priest can perform an exorcism.


Although the documentary explains through interviews that a possessed person can perform supernatural feats, such as speaking in dead languages, exhibiting great strength, and even floating in the air, none of these feats are captured in the documentary. Christina does change her facial expressions well, and she does have a hideous possessed voice, but good acting and perhaps voice sweetening can explain these characteristics away.


Father Amorth is a great person, and he is compelling as an exorcist of the Diocese of Rome. He has a quirky sense of humor. For example, he starts and exorcism by thumbing his nose at the devil. The good father also has a sense of showbiz, and during the exorcism, viewers will catch him looking into Friedkin’s handheld camcorder at times. He even has groupies, as demonstrated while he is blessing a group of young women. 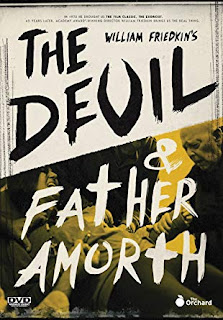 As with most documentaries of this type, the viewer is left to make up his or her mind about possession. There’s an undercurrent of irony in the documentary in that the demonic voice and other characteristics of possession are likely inspired by the director’s own movie. It would have been something to either witness something truly breathtakingly supernatural or to have heard more insight into the philosophical, social, and psychological fabrics that likely contributing to so many Catholics holding on to the phenomenon that is demonic possession.

The Devil and Father Amorth is okay entertainment, but for those seeking answers, it is a disappointment. Those looking to experience genuine chills should instead watch Friedkin’s seminal possession flick, which even the late Father Amorth called his favorite movie.