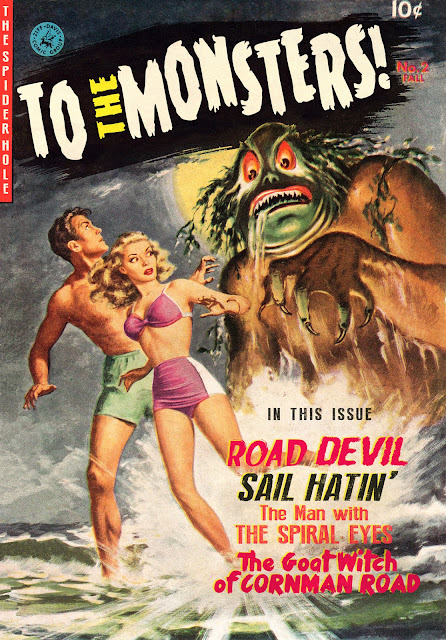 Q: There is something to be said for a name. Sometimes it means something, other times it just sounded right. Where did your band name come from?

The Spider Hole: I recently saw some old photos from a goth club I used to dance at in the 90s--it's where I met the original Spider Hole guitarist, actually--and it really put me in the headspace of where I was when I first came up with the name. I was 14 or 15 years old, writing an illustrated book called "A Man Named Usher, the Butler, and a Pumpkinhead," and my angsty-gothy characters all went to dance at an angsty-gothy club, and I needed an angsty-gothy name for this fictional surrogate club. "The Spider Hole" was just something that fit the architecture of the story, and the architecture of my brain at the time. I loved it. I wrote it everywhere. I knew immediately that "The Spider Hole" would be the name of my band. And it actually does mean something, sort of. But that's for another day...
Q: Describe the music you make. (Give details to its sound, lyrics, and structure)

The Spider Hole: There are really no restraints on the music we make. I guess it's dark, it's rock, there's blues influence, cabaret, punk, classic rock, goth, funk, a little dark country. We never stop in the middle of writing and go, "no, that's not our sound." We may stop and say "that's not the sound for this song," but if it stimulates us, there's nothing we won't do, musically. This may work against us, I don't know. But I can't see myself living any other way. I approach lyrics in a particular way. I feel the song out, usually starting with a melody and/or a title, and I find the story it's telling. Then I boil that down to the words most essential, not so much for telling the story itself, but for conveying the emotional line of the story. I'm sure they read like nonsense most of the time, like surreal, stream-of-consciousness tone poems, and there may be some passages that aren't much more than that, but as a whole, every song is telling a defacto story, ones that often, years later, I'll look back on and finally discover the meanings to. It's neat. As for structure, that is the most baffling aspect to songwriting for me. Where does the chorus go? How many verses before the bridge? Is there an intro? Do we need an extra measure of...stuff... here? Feeling a way through a song is sloppy and odd and if there are rules, no one ever taught me. I've been meaning for years to take 20 or 30 of my favorite songs and map them out and see what I learn, but I have not yet. And I should. One of my biggest worries is that our songs are so unconventionally structured that they risk alienating listeners.
Q: What formats do you prefer to release your music on? Digital, CD, Vinyl, Cassette, All the above?

Get it out there any way you can! I do love Cds, personally. I have always been a lover of the tactile. And as someone who makes his living as an album artist, I have a special affinity for seeing the CD package as a whole. Back cover, lyric booklet, band photos, etc... It's cool. it's collectible. It's a little chunk of art and music. That said, any and all forms of distribution have their charms.
Q: Your current single is playing on TUA's list. Tell us about the song. If there is a music video that goes with it, please share the link.

The Spider Hole: The song is "The Skeleton Wedding," it is in fact not only the first single off the new album, but it is also the first song we wrote for the album. It was written even before the theme and title of "To the Monsters" had been determined, and contributed to shaping the album's horror/Halloween theme.
Q: In your opinion why is playlisting important or not important to you and music? What suggestions might you give to other bands wanting to utilize Spotify to its fullest?

The Spider Hole: Playlisting is a valuable tool. I have discovered hundreds of new artists myself that I may otherwise never have come across by checking out various playlists. Get your music in with other bands of similar ilk, people WILL hear you.
Location: Phoenix, AZ, USA