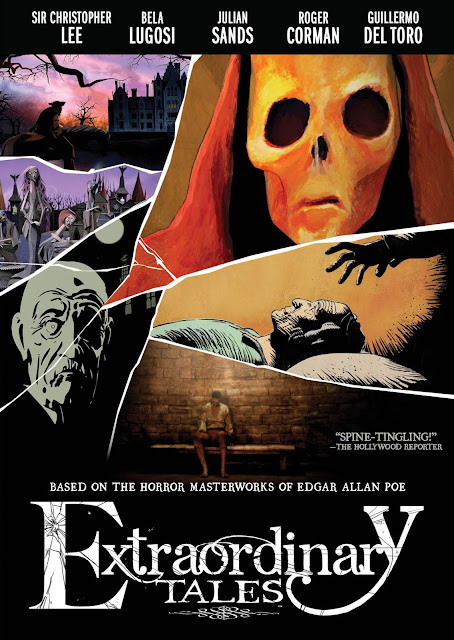 
Originally released in 2015, Extraordinary Tales is an animated anthology film that presents a suite of short tales by the undisputed master of the macabre, Edgar Allan Poe. Animation fans familiar with 1981’s Heavy Metal will note that this film has a similar structure, namely a series of wraparound vignettes that attempt to link together various stories. In Heavy Metal, the maguffin is the Loc-Nar, a green crystalline sphere that holds the sum of all evil. In Extraordinary Tales, a raven (Poe) fences with Lady Death, who lets him tell his final tales to attain fame before succumbing to her reaper’s sway. 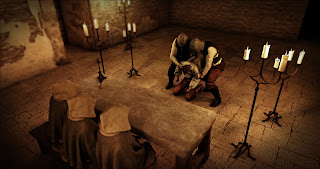 This compilation of Poe tales comes courtesy of animator Raul Garcia, who adapts all the stories and serves as director. Garcia and his animation team use a variety of styles to differentiate each story, and most of these styles serve the stories well. Garcia also brings in some heavy hitters to narrate the stories, giving the project an air of sophistication that few other Poe anthologies can ever hope to compete with.


After a short and overstated introduction, the film kicks off proper with “The Fall of the House of Usher,” narrated by the incomparable Sir Christopher Lee. The adaptation is truncated—as are all the stories—but the story does capture the deterioration of the house itself, in addition to the buried-alive theme that so many of the live-action films have dwelled on over the years.

Up next is my personal favorite, an adaptation of “The Tell-Tale Heart,” narrated by none other than eternal vampire Bela Lugosi. Although this narration suffers from a dated recording (it sounds like a record, complete with hiss and pops), the animation is done in minimal and stark black and white. The style was inspired by Alberto Breccia, an Argentine cartoonist who in 1975 adapted Poe’s classic tale in comic-book form under the titled “El Corazon Delator.” The animation style works very well in rolling out this tale, with Lugosi’s voice given the story added punch.


Julian Sands narrates “The Facts in the Case of M. Valdemar,” which uses a style akin to that used in comic books. It is one of Poe’s more gruesome short stories, and the animation works well, particularly when Valdemar succumbs to death.


Horror icon Guillermo Del Toro narrates “The Pit and the Pendulum,” which uses a realistic animation style that hints at rotoscoping while likely avoiding the technique. Although a summarized version of the tale, nevertheless hits all the high points and ends in the same way that Poe ended the original short story. 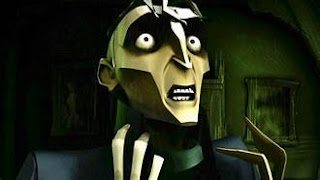 The final entry, “The Masque of Red Death,” is Garcia’s most risky adaptation, as he uses no dialogue from the short story, save one line delivered by Prince Prospero. Despite its lack of narration, the adaptation follows the story well, capturing the decadence of the masquerade while outside people die from the Red Death. None other than Roger Corman provides the voice of Prince Prospero, a “wink” that hardcore horror and Poe fans will get a chuckle out of.


Extraordinary Tales serves as an excellent introduction into Poe’s fiction. However, I would have preferred that the stories received full adaptation, as Poe’s sense of rhythm and word choice makes more exemplary listening. It would also be more satisfying to have seen adaptations of Poe’s lesser-known works. Pieces that come to mind include the shorts “Bernice” and “Morella,” which would be more in keeping with shorter works easily brought to life in detail with animation.


By remaining loyal to the source material and securing some mesmerizing narrators, Raul Garcia has demonstrated that he understands the essence of a good storyteller and does not feel the need to inject his own creative ideas into the words. Perhaps in the future, Garcia and his animation team can create a sequel of sorts, one with lesser-known tales that could pack a wallop. Imagine “Hop-Frog,” “The Oblong Box,” and even “The Black Cat” given the animation treatment. The mind reels.