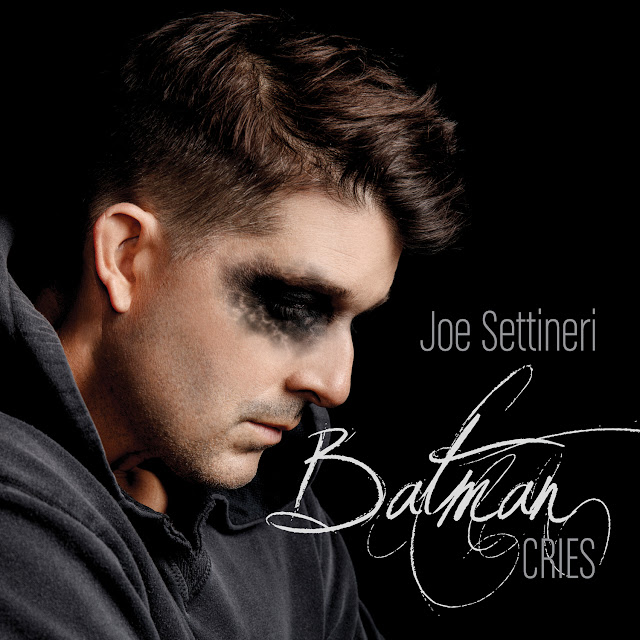 Joe Settineri is a vocalist who has released a powerful song titled Batman Cries and it covers the topic of mental health. This is a song which proves even superheroes can cry and shows how to carry on. It has been released this October, which is Mental Health Awareness month as well as Breast Cancer Awareness month. To persevere through the darkest days is an achievement itself, to hear a song that helps in carrying on in life is good. They say music is good for the soul, this is true. Joe Settineri speaks about music and mental health below.

Tiffini Taylor: Being a comic book nerd myself, I know the backstory of Bruce Wayne/Batman. His parents were killed, and he was left alone— how much of his backstory play a part of the thought and writing of this song?

Joe Settineri (J.S.):  Absolutely!  Part of why I chose Batman was that horrific backstory.  Add to that his extremely unemotional demeanor and guarded strength, and you get the perfect superhero to make the point of this song.  Even the strongest and least vulnerable among us fall. If Batman is down, some real serious and scary stuff must be going on!

TT: Mental health is a heavy subject, it has always been taboo and something you’re not supposed to speak of- what kind of change do you want Batman Cries to bring about in the way we view mental health issues?

JS.:   I love that you used the word taboo.  It bothers me so much that many people still view mental health in that light, and you’re right, they do.   My hope with this video is that people will think about Batman as a representation of the superhero within them, and realize we all need to be cheered on.  “Get up, stand up, be strong …“ is such a simple lyric, but it’s one we need to hear and something we should be saying to people around us all the time. And PS., as it turns out, using Batman in the song, was extremely taboo as well. I’ve gotten so many notes from people who love the song but are mad because they don’t believe Batman would ever, ever cry.  It’s all connected. Sometimes, someone who is so strong and able, like Batman, is exactly the one who’s broken and needs us.

TT:  I am bi-polar, I spent a very long time in an extremely dark place, I finally have very good therapist and I’m on the correct meds, unfortunately I hurt people that I care deeply about and I’m still working towards making amends with them — what made you put this song together and out into the world? What was the driving force behind it?

JS:  Many people close to me share that same unrelenting struggle, and I’m sorry it’s been such a long road for you.  What drove this song forward was the concept and the idea that we could make music and spread a message of hope and encouragement.  It made recording and releasing this song a no-brainer. If one person gains some strength or insight or encouragement with this song, then it was more than worth it.

TT:  What do you think society should do about the issue of mental health?

JS:    I think we should do exactly what you alluded to earlier – we need to talk about it much more openly and take the ‘taboo-ness’ out of the equation.  Too many people are suffering and literally fighting for their lives for us not to talk about it – constantly! Mental health is something you can’t see or touch, and I think that creates a barrier for people to understand that it’s just as serious of an illness as any other cancer or a heart condition, etc.

TT: Are there any plans to do a full album with this idea for a theme?

JS:   We are working on rounding out an album right now.   A lot of what I write about has to do with understanding our emotions, so I’m confident there could be a couple more songs that land in a similar space.  I might know someone who knows someone … (wink wink).

TT:  What do you want people to know about Batman Cries?

JS.: Everything we’ve already said plus the fact it was produced by my friend and producer Mike Krompass out of Nashville.  We had such a great time recording this song and ate a lot of Dunk’n Donuts while doing it.

TT:  Where did the concept or idea for the video come from?

JS:  The video was all about us trying to make the whole song more relatable.  Sure, Batman being broken is sad, but what if that superhero is you? So, I really didn’t want to be Batman per say in the video.  I wanted to be a representation of a superhero who was down and who chose to get back up and carry on, and I love that so many people are connecting with it that way.

TT: What would you like to accomplish from this song?

JS:   I’d like everyone who needs to hear it, to hear it.   And I’d love for people to connect with it even if it’s a momentary connection because of a word, phrase or just the way I sing a note.  I make music to connect with people.

TT: Do you have a superhero?

JS:   Yep!  Thankfully I have many superheroes in my life, and they come in all shapes, sizes, and ages!

TT: What is next for you?

JS:   It’s a moving train!  "Batman Cries" is going full tilt and we have another single coming out early next year called "Oxygen".  I also went back into the studio this summer and have some more amazing songs getting teed up to release.   It’s a really exciting time!

JS:   Thanks for your time.  These were really lovely questions.

Joe Settineri is a talent with a voice and has a style all his own. Batman Cries is a song with a strong meaning. It is emotional, it has a message of hope, and it is beautiful. Be honest and kind to each other.