The Void: Paying Homage to Horror While Exploring the Innards of Cosmic Terror


A crowd-funded project, 2017’s The Void at its essence explores the nature of the philosophical concept of nothingness (in this case, death itself) manifested (resurrection gone wrong). In its execution, however, writers and directors Jeremy Gillespie (Father’s Day) and Steven Kostanski (Manborg) pay homage to a number of horror movies, mostly from iconic writer-director John Carpenter. At the same time, the duo attempt to evoke cosmic terror by tapping into the works of Clive Barker and H.P. Lovecraft. The end result is a really good horror flick, albeit one with some plot holes that leave the climax and ending not as satisfying as the movie’s beginning and middle.


The overall structure of the movie pays homage to Carpenter’s Assault on Precinct 13. A nightshift medical staff, some patients, deputy sheriff Daniel Carter (Aaron Poole), a state trooper, and a homicidal father (Daniel Fathers) and son (Mik Byskov) are all inside the hospital, while outside stand a weird group of hooded, cult-like figures armed with knives. The intent of the figures is not to keep others out but rather to keep those inside from escaping.


Not everything is as it seems, however, as the father-and-son team have knowledge about the hooded figures, who apparently created a house of horror from which the father had to violently extricate the son. It also turns out that the lone doctor at the hospital, one Dr. Richard Powell (played by Kenneth Welsh) is a sorcerer of some type who has found a possible secret to what he believes is eternal resurrection. The bulk of the movie then addresses this phenomenon, with Powell and his hooded minions pitted against Carter and the remaining people trapped inside the hospital. 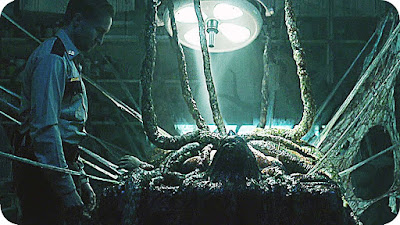 The creatures (previously botched resurrections by Dr. Powell) are done with practical effects, many of which pay homage to Carpenter’s version of The Thing. Although Dr. Powell has been compared to Frank Cotton from Clive Barker’s Hellraiser, I would instead say that the doctor is instead a mix of Lovecraft’s character’s Dr. Herbert West from the short story series “Herbert West—Reanimator” and Crawford Tillinghast from the short story “From Beyond.” Like Tillinghast, Powell taps into a nether-region or perhaps another dimension from which to bring back “life” into the dead. The transition to resurrection is not without its faults, as the flesh is pliable, the second time undergoing a hideous metamorphosis of mind and body. Of course, Powell wants more than just immortality—he wants subjugation, and the many minions outside the hospital are subservient to him because they expect rewards subsequently from the other side.


The script by Jeremy Gillespie and Steven Kostanski is pretty good. There are quite a few twists and turns that keep the viewer wondering throughout the movie, the characters are all written well, and the pace is effective. However, the scriptwriters should have taken the time to work on another draft, as the last part of the film suffers from a bit too much abstraction that leads to an unsatisfactory climax. There is one scene where Carter and his wife literally face the unknown in the form of a pyramid (“The Void” of the title, which reminded me of Clive Barker’s concept in Hellraiser II), and although this is in keeping with the movie’s Lovecraftian feel, it is nevertheless too abstract and not very imaginative.


The actors are uniformly effective, with the leads handling their characters well. There are some supporting players that need some more work in crafting their characters, but for the most part there are few distractions. As directors, Jeremy Gillespie and Steven Kostanski handle pace well, but they are most effective in executing effective plot twists. Hardcore horror fans will also enjoy the fact that there are no jump scares or cheap scares in this movie—the oftentimes gross horror sequences are also used to build tension, with the movie attempting to create cosmic terror at its climax.

The practical effects are fantastic, with little or no CGI used. The organic nature of these effects, and of course the practicality of having the actors interact in real time with such effects, produces some outstanding sequences sure to impress even jaded fans of the genre.


One of the film’s drawbacks is having a pregnant girl and her father as part of the group trapped inside the hospital. It turns out that the girl is a minion of Dr. Powell and is carrying his child. This whole plotline really does not lead anywhere, and it would have been better if the story would have stayed focused on Carter versus Powell.


On the positive side is the movie’s ability to pay homage to some great horror films. What is important here is not that the filmmakers wear their influences on their sleeves. Rather, it’s that the filmmakers take full advantage of what worked before to create a scary, tension-filled, and plain fun movie for fans that yearn for this type of material. Sure, the siege picture has always worked, so why not use it? Mad science and sorcery can create some disturbing ideas, so why not use it as well? And practical effects have demonstrated a more visceral response than even the best CGI, so why not return to them to create guttural responses?


There is also an undercurrent of body horror in this movie, hearkening to the early works of the great David Cronenberg. The Void explores the hideous side of creating life, of giving birth and the hideous consequences of attempting to create life using science and sorcery instead of letting nature takes its course. This movie may remind viewers of Cronenberg classics, such as Shivers, Rabid, The Brood, and even Videodrome.

Those yearning to experience an original and entertaining horror flick would do well to check out The Void. It may take several viewings to iron out the plot and attempt to move past the few pesky holes that glare through at the movie’s end, but the experience is well worth it. Besides, when is that last time you wanted to watch a horror movie more than once? 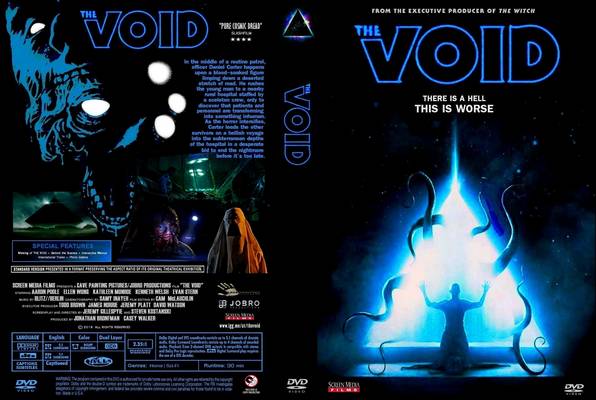