OCTOBER Horror Movie Review Continues with: The Ritual: This Ain’t Your Mama’s Troll 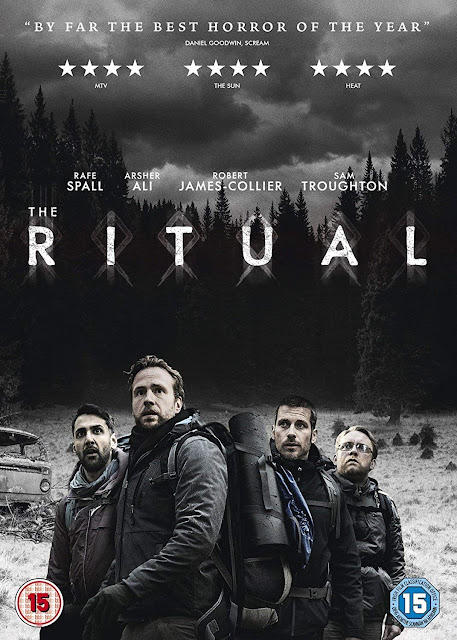 
Originally released in 2017 at the Toronto Film Festival, The British film The Ritual has found a place at Netflix, although it also was given a full theatrical run in the United Kingdom, where it performed well. The movie is based on a horror novel written by Adam Nevill. Originally released in 2011, the book won the 2012 August Derleth Award for Best Horror Novel. Although the movie differs from the book, it nevertheless remains a successful entry in the realm of visceral horror and atmospheric terror.

There’s a refreshing trend in recent horror films, one that began in the international community and has started to influence the thrillers made in the United States. Many filmmakers have rediscovered atmospheric and creature horror, two subgenres that have always been moneymakers. In addition, filmmakers have started to avoid the usual clichés in horror movies, focusing on well-written scripts with fully realized and believable characters and well-crafted and tense-filled plotlines. The Ritual has these characteristics in abundance, and although the film’s ending is a weak point, the bulk of the film will have old-school fans rejoicing.

The Ritual opens with five old friends reuniting at a pub to discuss plans for a group trip that will enable them to catch up on events since university. Right from the start, Joe Barton’s screenplay adaptation of Nevill’s novel screams quality, as all five characters bring with them a refreshing three-dimensional quality. Barton’s dialogue is fresh and fun, and the script is designed to bring viewers along for the ride without them being jarred loose with self-conscious dialogue, poor characterization, or stupid jump scares or plot points. 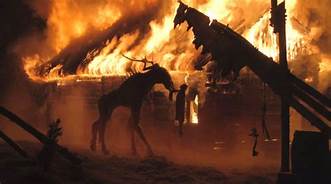 The movie then shifts to six months later, with the four men now hiking in the Sarek National Park in northern Sweden. They have come together to honor’s Rob’s choice in a vacation locale, even building a small rock monument to their fallen friend. The hill-covered King’s Trail is treacherous, with poor Dom injuring his knee while hiking. The group decides to take a shortcut through an imposing forest, believing that they will reach civilization in half the time.


Upon entering the thick and dizzying forest, the men encounter some strange things, among them a gutted elk hanging high off tree branches, with strange symbols (runes) carved on nearby trees. A heavy rainstorm forces the men deeper into the forest, where they find a dilapidated cabin. They break in and decide to spend the night, but they quickly learn that the cabin is uncannily creepy. They find ruins once again, but the worse part of it is upstairs, where they discover an effigy of a human trunk with no head and antlers for hands.


That night, Luke experiences a nightmare reliving Rob’s death. He wakes with a start, finding things in chaos. It turns out all four men have experienced nightmares, but there are physical manifestations as well. Luke finds several strange punctures on his chest, Hutch is so scared that he urinates himself, Dom is almost catatonic with fear, and Phil wakens in the upstairs room, naked and kneeling in pagan prayer in front of the wooden effigy.


Thus begins the men’s dizzying descent into the realm of nightmare and chaos, as they are relentlessly pursued by something large and fast that knows well the forest and its maze-like structure. Essentially, greenhorns, the men are ill-equipped to handle the forest and its trappings, and soon they are being picked off one by one. Eventually, Luke and Dom are captured by a group of odd, inbred hill people. Worse still, this group says that they worship a strange creature and that Dom is to be sacrificed to it. As for Luke, he is told that he will join the group, as his pain “is great” and that their god can derive strength and sustenance from it. The remainder of the movie has Luke confronting his guilt and the bizarre creature, making a final stand against both.


Approximately 80% of The Ritual makes for one hell of a horror experience. Although I did not care for his previous work, director David Bruckner absolutely nails the story, creating a set of outstanding horror sequences that rely on atmosphere, tension, and what is sometimes seen and not seen. There are a few jumps scares in the movie, but even these are handled well so that instead of being scare-for-scare’s-sake they actually contribute to the overall narrative. The movie doles out answers slowly, bringing viewers along for a dizzying ride, and although the movie’s ending is lackluster, the bulk of the film evokes not only moments of horror but also an underscored sense of terror.


The movie’s monster is what the hill people call a Jotunn, a Norse creature from mythology that is very ancient. Modern storytellers refer to it as a troll (or a dwarf or elf, although these beings are different in Norse myths than those found in modern fantasy fiction), but earlier incarnations are more mysterious, making such things abstract beings of great power and at times menace. The hill people also refer to it as a child of Loki, the Norse trickster.

Not only does the creature make an impression physically (the special effects are great, particularly during the final reveal), it also makes one with respect to the film’s atmospheric terror. This Jotunn has the ability to expand lifespans, but it also feeds off the pain, which it cultivates as strength. Those with the greatest pain are allowed to join the group of hill people, which help it capture outsiders for its consumption. It is when Luke finally faces his pain and guilt over Rob’s death that he cultivates the strength to overcome the Jotunn. The concepts of pain and strength are common in Norse mythology and storytelling, and this film brings them to the forefront.


A refreshing entry in creature cinema, The Ritual is an excellent horror film that attempts to evoke terror and for the most part, succeeds. The undercurrent of psychological terror and the vulnerability of the mental and emotional baggage that we all carry serves as great fodder, particularly when it can be used to feed a creature that has grown reliant on such psychological pain. The idea that this creature bestows immortality is also effective, particularly when Luke discovers the negative effects of long life when he stumbles into a room of “old ones” who have become effigies themselves. It is a stark moment of terror, one with haunting qualities that few films ever manage to capture on celluloid.