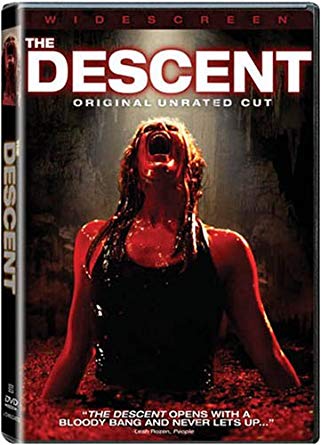 
Originally released in 2005, The Descent is a British horror movie written and directed by Neil Marshall. Although too reliant on jump scares that bog the movie down, the flick does feature some three-dimensional characters (rather than the usual clichéd lot), an interesting plotline, and some genuine chills. Marshall should have taken the time to streamline his script, as when the story gets going, it has some compelling twists and turns. As a director, Marshall has a knack for effective storytelling, although he tends to go back to jump scares rather than turn up the tension or evoke an eerie atmosphere, both of which would have served the movie well.

The movie begins with a trio of adventurers, Juno (Natalie Mendoza, in a star turn), Beth (Alex Reid), and Sarah (Shauna Macdonald, as the principal protagonist). The three women are whitewater rafting down a hard-charging river. When the trip is down, Sarah gets back together with her waiting husband Paul (Oliver Milburn) and their daughter Jessica (Molly Kyle). On the way home, the couple bickers, hinting that Paul may be involved in an extramarital relationship with none other than Juno. Distracted for a moment, Paul over-steers the auto, crashing it into an oncoming truck. Paul and Jessica are killed.


One year later, Sara gets back together with Juno and Beth, along with friends Sam (MyAnna Buring) and Rebecca (Saskia Mulder), as well as newcomer Holly (Nora-Jane Noone, in a fun performance). This time, Juno has arranged for the group to go spelunking in a cave under the Appalachian Mountains of North Carolina. According to Juno, the caving expedition is not an overwhelming chore, as others have already establishing guide-points and she has done due diligence by affirming the course from start to finish. 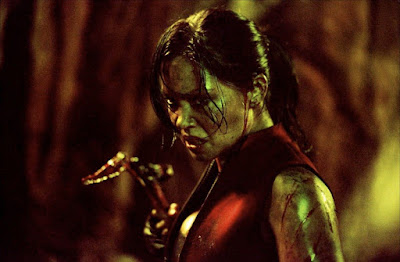 At first, it looks like Juno knows what she is doing, but once the cavers start moving through the ever-tightening passages, it is clear that she has lied. The first passage turns out to be much too tight and perilous, with one crawlspace subsequently collapsing behind the rear caver, trapping them all inside. The group interrogates Juno, who admits she has led them into an unknown cave system so that they are the first to explore it and even name it (after Sarah, of course).


The cavers press forward, hoping to find the quickest way out. Along the way, they discover caving equipment that is at least one hundred years old, as well as bones of animals and what look like those of human beings. In addition to having to overcome the cave’s many perils, the cavers soon learn that they are not alone. They subsequently encounter hideous albino creatures, known as “crawlers.” These blind but fast humanoids are intent on having the women for lunch. The remainder of the movie has the women battling their way through the cave, with more and more crawlers in pursuit.


Patterned loosely by movies such as The Hills Have Eyes, Assault on Precinct 13, and Night of the Living Dead, The Descent builds tension by isolating a group of women in a tight environment with creatures that have distinct advantages over them. As in The Hills Have Eyes, the victims must reach deep within their human nature to tap into their inner predators to survive. This theme in the movie is rolled out extremely well, with all the actresses crafting three-dimensional characters with real emotions and reactions to intense situations. The caving scenes before the crawlers make their appearance are intense and claustrophobic, and some of the sequences of the women fighting mano-a-mano with the crawlers are brutal and intense. The choreography of such fights emphasizes chaos and brutality, capturing the essence of prey and predator like few films ever have.


However, there are two principal problems with the movie. The first is a lazy script, which has characters do stupid things outside their personalities just to get them isolated for a crawler attack. The second, more egregious fault, consists of the number of jump scares during the movie. For example, there is one final jump scare in the movie at the end that’s a real groaner. Watch the movie and I am sure that you will groan, too. 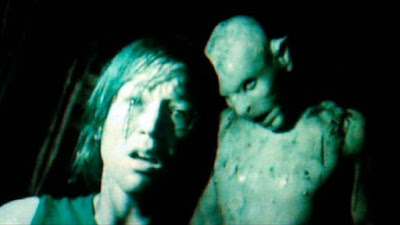 Worth mentioning for this movie are the set design and special effects. Although exteriors were shot in Ashridge Park in Hertfordshire, the interior scenes were actually sets built at Pinewood Studios. Designer Simon Bowles gets a tip of the hat, as these claustrophobic interiors not once looked fake. The creatures were designed by Paul Hyett, and these too are believable. The idea is that these blind albinos have developed over thousands of years, venturing outside the cave only when they cannot find food within. Without stating it overtly, it seems that the creatures have males and females among them, with the females running the show and the males serving as muscle.


When it wants to, The Descent is one hell of a creepy and atmospheric movie. Tension is ratcheted up slowly, and when the creatures finally attack, the ensuing chaos is bloody and intense. The acting is solid all around, with the all-female cast doing well. The underlying theme of survival, which the women have always toyed with but now find themselves having to embrace, is a strong one, as each woman must tap into her inner nature and act accordingly—and not always with human aplomb.


However, as previously stated, there are some missteps, and these are clearly felt, as they will take the viewer out of the movie momentarily. It is my sincere hope that Marshall learns from these mistakes in horror cliché and on his next outing turns in a much richer storyline, one that relies on genuine chills and terror and eschews the jump scares so damn prevalent in today’s horror movies.
Horror Movie Review The Descent
Location: New Mexico, USA