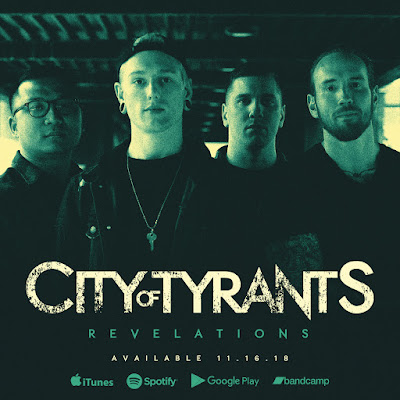 A force coming out of New Jersey, this 5 group of bandmates, first released their EP Erebus in 2016, with a lineup change soon afterward the metal world created what has now become City Of Tyrants.
A well-timed shot was sure to come with this next release, their new album, Revelations. A creative undertaking that melds an epic storyline that breathes post-apocalyptic yarns spun with the pulverizing sounds of drums, ascending vocals, and the sharply contrasting guitars. The album is heavy and delivers an unusual spark. A time traveling story of developing characters with a focus on the main character that turns to see himself and face what is.
Having released their first single from their album due out on 11/1618, "Astral Projection" you sense the whole tone of how this band sincerely stands out to be a sound driven by their own mark.