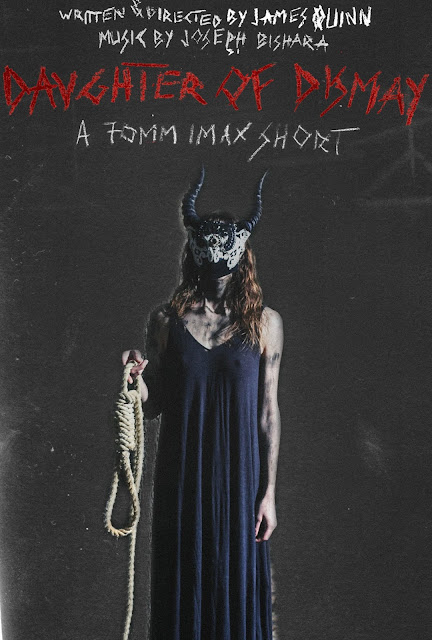 Based in Austria, writer, director, and photographer James Quinn founded Sodom & Chimera Productions to create films that focus on the bizarre, the experimental, and the unconventional. In 2017, Quinn made his full-length debut with Flesh of the Void, an experimental nightmare about what it could feel like if death was the most horrible thing anyone could ever experience.


For Quinn, his specialty to date consists of short horror films with an experimental bent. His latest short films include 2018’s Tears of Apollo and the following 2017 shorts: Sulfur for Leviathan, The Temple of Lilith, and Patterns to Follow. Adding to this ever-expanding list of shorts is a new entry, this one titled Daughter of Dismay, the first-ever short film shot on 70-millimeter IMAX. Quinn has completed the short film, which in addition to IMAX will have prints struck in regular 70 millimeter and 35-millimeter cuts for exhibition in festivals throughout 2019.

“Daughter of Dismay was always supposed to be a big project, presented in the most epic format it could be presented in,” Quinn explained about the shoot. “At first we were aiming for regular 70 mm but upgraded to 70-mm IMAX only weeks before the shoot. We’d like for people to not just watch this film, but to be completely immersed in it and feel everything that’s happening. 70-mm IMAX was exactly what we needed. Not just that, we felt like the world needed a different kind of IMAX presentation for a change, not a big Hollywood blockbuster or a space documentary, but an artistic, heartfelt film with horror elements, something that no one could imagine in this format.”


The plotline for Daughter of Dismay sounds good. The short film tells the surreal and mystical tale of an emotionally broken witch. This witch enters the darkness of the woods so she can fulfill her deepest desire. Desperate, she takes extreme and radical measures that will result in sinister consequences. The movie uses a painting-like array of colors and elegance designed to evoke an epic, moving, and emotional journey through a world filled with witchcraft and occultism, one that leads to a heartbreaking and melancholic finale.

With principal photography and editorial completed, Daughter of Dismay is with Foley artist Martin Langenbach, known for his work on Goodbye Mommy, The Perfume, and The Autopsy of Jane Doe. Once Langenbach finishes his work, the film will be sent to Joseph Bishara for scoring. Bishara is known for his scores of horror movies such as Insidious, The Conjuring, Annabelle, and Dark Skies.
Daughter Of Dismay