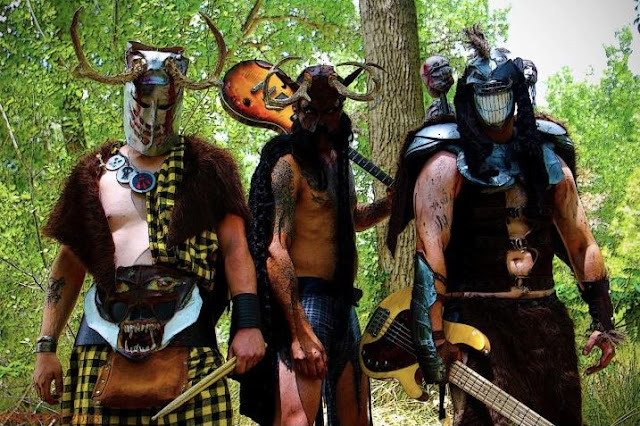 
Formed in 2012, Albuquerque’s The Horned God play what the band’s members describe as “Ancient-Celtic-inspired stoner rock.” After years of refining their musical prowess and delivery at Albuquerque venues such as The Launchpad, Sister, Moonlight Lounge, and Burt’s Tiki Lounge, the band inked a deal with Desert Records to unleash their debut full-length studio CD, one titled Volume: 1.


One of the more interesting components of this band is that it is that rarity in the heavy-metal genre known as a cosplay band, one like Gwar. The Horned God’s mythology is based on a comic-book series produced by Pat Mills and Simon Bisley. This series tells the tale of Slaine mac Roth, a Celtic warrior king who uses his axe “Brainbiter” and his ability to “warp spasm” to defend his people against the dreaded dark druid Slough Feg. This comic book has been around since 1983. In 1989, Mills and Bisley produced a three-book series titled Slaine: The Horned God.


Hardcore fans of this creation, three young men used the comic book and its stories to form The Horned God, a three-piece band. The band members donned costumes of key characters in the comic book and created music and lyrics that reflect their love for the story and the passion behind Celtic music and stoner rock.


The CD opens with a short spoken-word intro (in Spanish, no less), after which the album begins proper with “Search for the Horned God.” The fusion of Celtic music with stoner rock is an excellent one, with Tim’s drum setting a droning pace while Dominic’s guitar setting down some Celtic-driven and crunchy guitar rhythms and riffs. Robson’s bass brings down a heavy groove, sometimes shadowing the guitar to give it a crisp-laden shadow. Dominic also contributes vocals, which are clean and delivered with the aplomb expected of the genre.


“Exiled” presses forward the psychedelic atmospherics, not once stopping to take a breath. Next up is “Battle for the North,” which kicks off with an epic drumbeat followed by a crunchy guitar riff. As the guitar lead goes into overload, the bass kicks in at full drive, with Robson creating a stunning backbeat vibe that will have you moving in no time. The groove alone on this track makes it one of my favorites on the entire album.


“Earth Goddess” starts off much like “Exiled,” setting down an epic approach with psychedelic crunch. Dominic’s voice keeps things interesting, a slight echo providing some flair to his delivery. Dominic also manages to blend rhythms with explosive guitar leads, so that this song never stops but rather builds and builds until it blends with “The New Horned God.” This latter track serves as a guitar-driven instrumental. Then there’s the “Hymn of Slough Feg,” a sludge-like track with a droning backbeat, a steady but atmospheric guitar riff, and a back-of-the-throat delivery on vocals. This hymn more than lives up to the many deeds of a previous Horned God, who refused to step down after his reign and who has since then consumed great worm’s eggs to postpone his death for more than 20,000 years. 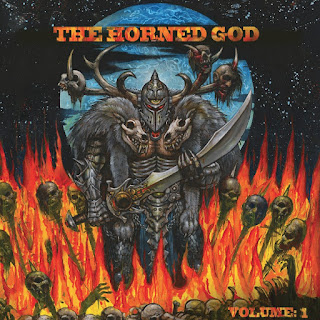 “Lunar Power” is another fast track similar in vein to bands such as Monster Magnet and Nebula. The bass and guitar work well together, with the drums serving to propel the beat forward and slow it down for some added crunch. The CD’s closer is “Fodder Flax Fire and Frigg,” which kicks off with some cool audio special effects before Dominic’s hair-raising guitar riff set the stage for a groove-laden song with a vibe right out of old-school Black Sabbath, not traditional metal but later, when the Sabbs tore it up with a heavy vibe but a faster pace.


But the CD does not end here, as there is a hidden track titled “Avagdu.” For those who are not aware of the name, Avagdu is the ugly son of Welsh goddess Ceridwen. His name means “utter darkness.” This track kicks off with one hell of a bass riff, with Dominic flexing his voice muscles while setting down a killer guitar riff.

Fans of stoner rock and epic metal should give Volume: 1 by Albuquerque’s The Horned God a listen. The fusion of stoner/epic metal with Celtic music is stellar. These seasoned musicians set down some killer riffs, low-end grooves, and stunning percussive bursts, but perhaps the best component of this band and these facets are not independent. Instead, the band crafts seamless music that emphasizes the song rather than just musical acrobatics. After listening to Volume: 1, you will come out of a daze after having experienced a world of Celtic gods, powerful warriors, and hideous monsters.