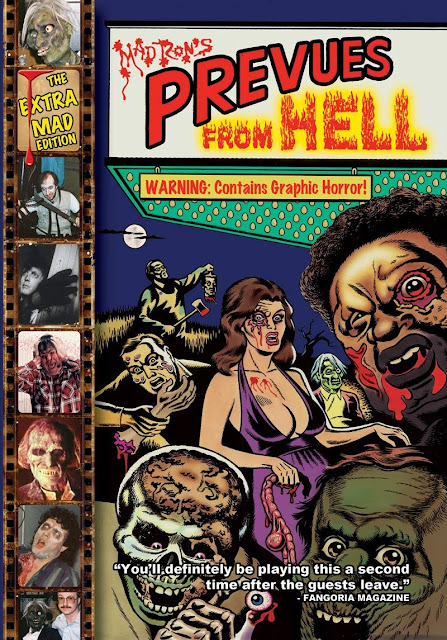 Originally compiled and released in 2010, Mad Ron’s Prevues from Hell is a stellar collection of trailers from horror and gore films, most of which were released from the 1960s to the golden age of the late 1970s and early 1980s. The golden age of horror—a time when drive-in theaters were still a thing and midnight movies catering to gorehounds were all the rage in grindhouse theaters—was a time when independent film often trumped Hollywood releases, so much so that even mainstream theaters began to tap into the world of underground horror filmmaking. Of course, Europe tapped into this craze early on, with filmmakers such as Bava and Argento leading the charge with their dementia displayed on yellowed celluloid.


If you are a fan of old-school trailers, then this compilation is for you. If you are on the fence but enjoyed the loving care that the various guest filmmakers put into the fake trailers (some of which were later made into full-length motion pictures) that made up the 2007 double-feature extravaganza Grindhouse (Death Proof/Planet Terror) by Quentin Tarantino and Robert Rodriguez, then you owe it to yourself to see the real thing. Some of the trailers in Mad Ron’s Prevues from Hell served as inspiration for these fake trailers. Examples include Rob Zombie’s Werewolf Women of the SS, Edgar Wright’s Don’t, and Eli Roth’s Thanksgiving.


First things first: The singular issue I had with Mad Ron’s Prevues from Hell was the comedy wraparounds and bits that broke up the many trailers on this compilation. The wraparounds consist of comedian/ventriloquist Nick Pawlow and his zombie dummy, Happy Goldsplatt. The duo is inside a grindhouse theater, where they are hosting a movie run for a horde of zombies looking for entertainment. Helping the duo out is Mad Ron (Ron Roccia), who actually owns the many trailers we are going to see. Poor Ron is chained to the projector, but he does not seem to mind, as he is slowly turning into one of the undead.

The comedy in these routines, if you want to call it that, is poor and cornball. Pawlow is not much of a ventriloquist either, as you can see his lips move every time Happy talks, and the zombie shtick consists of the usual fare, with zombies “buttering” their popcorn with blood and eating body parts and each other while watching the show. There are some really good special-effects gags on display, such as when a scalper’s eyes spew blood, but the actors are not really good at selling such effects. The effects themselves are stellar, and this is not surprising, given that such work is courtesy of Jay Kushwara, who worked on television shows such as Millennium and Monsters, and Jordu Schell, who did character design for James Cameron’s Avatar. Despite such amazing artists behind the scenes, the bits are hard to sit through, particularly when they could have been avoided to make room for even more trailers.


Now, onto the real reason, Mad Ron’s Prevues from Hell is essential viewing: The trailers. There are 47 of them, some short and some long, but all of them hearken to the days when there were so many choices of horror movies to indulge in during a hot weekend at the drive-in or the stale air-conditioning of shopping mall theater.


The compilation features trailers of some expected flicks, such as George Romero’s Night of the Living Dead, the often-cited double feature I Drink Your Blood/I Eat Your Skin (the audio of which has been sampled by death-metal band Mortician), Children Shouldn’t Play with Dead Things, and the seminal Texas Chainsaw Massacre. The compilation is not restricted to American movies, with trailers offered up for Carnage (Mario Bava), Deep Red (Dario Argento) and Beyond the Door (Ovidio G, Assonitis and Robert Barrett) but a few examples of European fare.

This compilation also features some rare trailers. For example, you can watch a long trailer for Isla, She Wolf of the SS, with Dyanne Thorne is all her glory; the Mexican oddity Night of the Bloody Apes, which mixes horror with professional wrestling; the weird Horror on Snape Island, which likely promises more than it delivers; the British-American collaboration that is The Mutations, in which a scientists mixes plants with humans; and the Spanish flick Diabolical Dr. Z, directed by filmmaker Jesus Franco.

The treasure trove found on Mad Ron’s Prevues from Hell makes this DVD an essential component of any horror collection. Over the years, I have watched the bulk of the movies on this compilation, but I also found a few that I have not screened. The trailers can be found in other collections, but Mad Ron’s Prevues from Hell brings them together in one package for fans of horror, gore, and the weird. 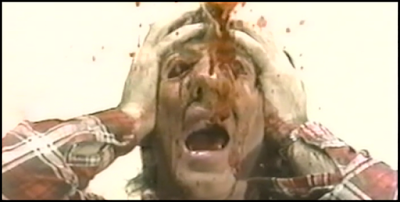 
Double Feature: I Drink Your Blood and I Eat Your Skin
Texas Chainsaw Massacre
Deranged
Three on a Meathook
The Corpse Grinders
The Undertaker and His Pals
Love Me Deadly
Children Shouldn’t Play with Dead Things
The Maniacs are Loose
Cannibal Girls
Torso
Double Feature: Blood Spattered Bride and I Dismember Mama
The Ghastly Ones
The Wizard of Gore
Beyond the Door
Deep Red
Sisters
Devil’s Nightmare
The House of Exorcism
Lady Frankenstein
Flesh Feast
Tales from the Crypt
Vault of Horror
Horror of the Zombies
Bloodeaters
Triple Feature: Revenge of the Living Dead, Curse of the Living Dead, and Fangs of the Living Dead
Diabolical Dr. Z
Africa: Blood and Guts
Night of Bloody Horror
Silent Night, Evil Night
The Mutations
The House that Screamed
Blood and Lace
Two Thousand Maniacs
Night of the Living Dead
God Told Me To
Horror on Snape Island
Wildcat Women
Ilsa, She Wolf of the SS
Man from Deep River
The Last House on the Left
Carnage
Color Me Blood Red
Mad Doctor of Blood Island
Silent Night, Bloody Night
Bloody Pit of Horror


Night of the Bloody Apes