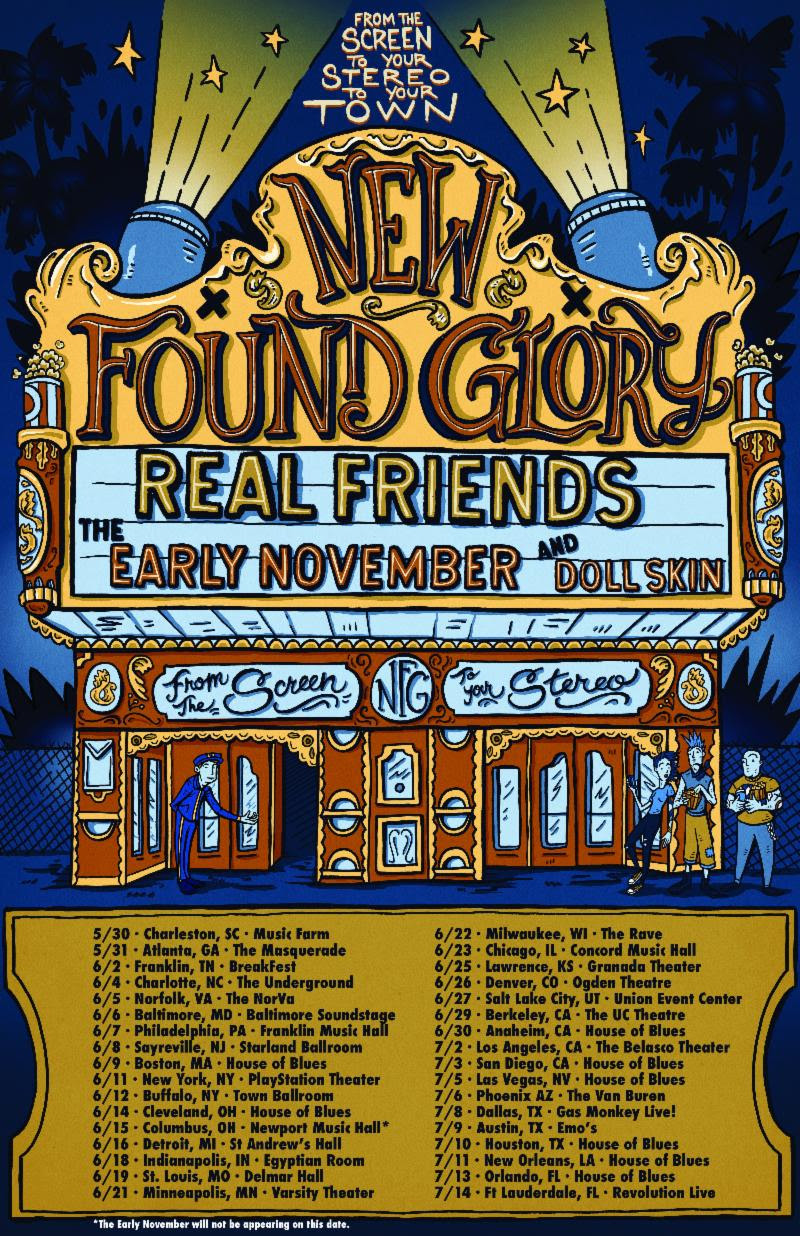 Announces The
From The Screen

To Your Stereo To Your Town Tour
With Support from
Real Friends,
The Early November and
Doll Skin

January 29, 2019 - Coral Springs, FL - New Found Glory fans are celebrating today after the band has announced The From The Screen To Your Stereo To Your Town Tour!! They will be joined by Real Friends, The Early November and Doll Skin for a stacked lineup that will be taking off across the United States beginning on May 30th.  Pre-Sale tickets and Super Fan Bundle Packages are available now at newfoundglory.shofetti.com with general tickets on sale Friday, February 1st.
As if this wasn't enough of a reason to celebrate, New Found Glory also finally announced the release date of From The Screen To Your Stereo 3. Due out May 3, 2019 via Hopeless Records, the album is the third installment of their fan-favorite nostalgic movie cover records. From The Screen To Your Stereo 3 will feature very unique NFG versions of movie themes like "The Power Of Love" from Back to The Future, "Let It Go" from Frozen and "Eye Of The Tiger" from Rocky 3 as well as 4 more theme song hits! Pre-order details have not been announced yet.
From The Screen To Your Stereo 3 Track Listing
1. Cups
2. This Is Me
3. The Power Of Love
4. Let It Go
5. Accidentally In Love
6. A Thousand Years
7. Eye Of The Tiger
The From The Screen To Your Stereo To Your Town Tour will include a very special stop in Franklin, TN for the second annualBreakFEST, a full day festival showcasing not only music but the most important meal of the day - breakfast. Taking place on June 2, 2019, the event will be held inside The Factory. Bringing together both old and new friends in the music scene like Mae, Hawthorne Heights, Microwave, Jetty Bones, Love You Later, Doll Skin, H.A.R.D. and tour mates Real Friends andThe Early November, BreakFEST is just another way that New Found Glory continues to find unique ways to connect with their fans and their local communities. For more information, please go to http://breakfest.net/.
A full list of tour dates can be found below.
UPCOMING NEW FOUND GLORY TOUR DATES
May 30 - Charleston, SC - The Music Farm
May 31 - Atlanta, GA - Heaven at The Masquerade
June 2 - Franklin, TN - Liberty Hall at The Factory*
June 4 - Charlotte, NC - The Underground
June 5 - Norfolk, VA - The NorVa
June 6 - Baltimore, MD - Baltimore Soundstage
June 7 - Philadelphia, PA - Franklin Music Hall
June 8 - Sayreville, NJ - Starland Ballroom
June 9 - Boston, MA - House of Blues
June 11 - New York, NY - Playstation Theater
June 12 - Buffalo, NY - Town Ballroom
June 14 - Cleveland, OH - House of Blues
June 15 - Columbus, OH - Newport Music Hall**
June 16 - Detroit, MI - St. Andrew's Hall
June 18 - Indianapolis, IN - Egyptian Room at Old National Centre
June 19 - St. Louis, MO - Delmar Hall
June 21 - Minneapolis, MN - Varsity Theater
June 22 - Milwaukee, WI - The Rave
June 23 - Chicago, IL - Concord Music Hall
June 25 - Lawrence, KS - Granada Theater
June 26 - Denver, CO - Ogden Theatre
June 27 - Salt Lake City, UT - Union Event Center
June 29 - Berkeley, CA - The UC Theatre
June 30 - Anaheim, CA - House of Blues
July 2 - Los Angeles, CA - The Belasco Theater
July 3 - San Diego, CA - House of Blues
July 5 - Las Vegas, NV - House of Blues
July 6 - Phoenix, AZ - The Van Buren
July 8 - Dallas, TX - Gas Monkey Live!
July 9 - Austin, TX - Emo's Austin
July 10 - Houston, TX - House of Blues
July 11 - New Orleans, LA - House of Blues
July 13 - Lake Buena Vista, FL - House of Blues
July 14 - Fort Lauderdale, FL - Revolution Live
* - BreakFEST
** - No The Early November
New Found Glory