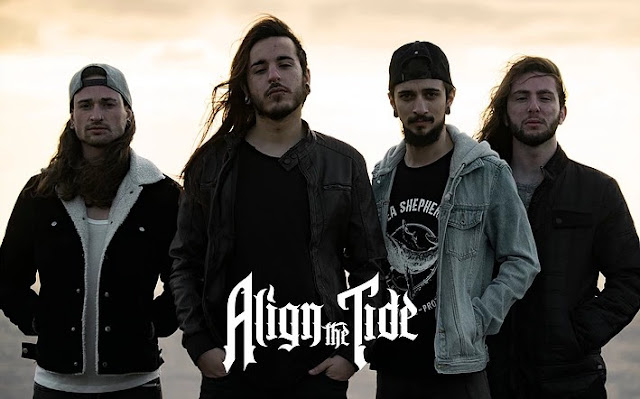 'Dead Religion' takes inspiration from prayers which remain unanswered, thereby instilling doubt on each person. False advertising from preachers and prophets lighten up the grim thoughts of death with nice ideas of the afterlife, which some people choose to believe it, even though we were not promised anything after death." - Align The Tide

This album came into my inbox ready for a listen and review recently. The band members are Kyle Farrugia - Vocals/Lead Guitar, Nikki Buttigieg - Rhythm Guitar, Danny Dalli - Drums/ Backing Vocals, Gabriel Camilleri - Bass Guitar and interesting hometown of Mellieħa, Malta.
Some of the tracks on this album are Comedown –where you can sense the fury of the vocalist that begins a mental mosh pit amongst extreme drumming, the metal roar of Blacklist and the interplay of lead and bass guitar work. Then there is the very powerful Dead Religion for which they have just released a video (linked here), with intense and compulsive guitar work that drives it forward into an awesome abyss of metal intensity. Just as you think things can’t get heavier, comes the very weighted and almost insanely fast  Dark Passage. There is a different pace for Stillborn which is haunting and grim, and again for the track Retribution. The almost melodic Lucid Life changes pace within this very fast paced album and has almost a touch of rock amongst its metal sound. This is a great album to listen to with a lot of unique guitar work and a front man with a voice that slays. Nice job!
A little bit from the band: The founders of the band Danny on Drums and Kyle on Guitars/Vocals, have been exploring music genres for the past nine years before settling in the active sound you hear today! Joining the ranks with Gabriel on bass & Alston on rhythm guitar, the line-up was completed. Together, they composed music based on thrash, groove & melodic metal resulting in the recording of their debut album Dead Religion and videos for "The Golden Throne" & "Welcome to Hell" from the same self-financed record. Merchandise has been designed and produced to accompany the above release. The band participated in several local gigs & festivals where they have rooted their main fan base before embarking on a mini European tour visiting Germany and the Czech Republic.