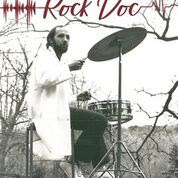 Carox Rox reviews “ROCK DOC” by Neil Ratner MD
Release Date (digital and audio book as told by the author): Week of December 3, 2018
Anticipated Release Date (softcover): Week of January 20, 2019
As the press release from the Albright Entertainment Group tells us:  In the mid late fifties, a young Neil Ratner was banging his silverware on the kitchen table and anything else he could find, with the dream of becoming a rock and roll drummer.
But after being in a few bands in high school and not achieving the success he needed to continue, Neil packed up and began a premed curriculum at the University of Vermont.
The summer of 1969 would prove to be a very significant time for Neil. He took a summer job in New York City training to be an operating room technician and sublet an apartment in New York City's gritty East Village. Rick Derringer, formerly of the band The McCoys (who had the massive #1 hit "Hang On Sloopy” in 1965), lived upstairs and he and Neil struck up a friendship. Rick was working with both Johnny and Edgar Winter. Neil asked Rick to get him a job as a drummer to no avail and after the summer, Neil went back to the pre-med program at the University of Vermont.
But everything changed a year later when, in a surprise phone call, Rick asked Neil to be the road manager for Edgar Winter's new band, White Trash (featuring Derringer, who produced the band's self titled album). Although Neil really wanted to be the drummer, he took the job and started his short but intense career in the music business. After about a year with Edgar, he took a job as special assistant for rock impresario Dee Anthony and toured with Dee's bands Humble Pie, Peter Frampton, J. Geils Band and Emerson, Lake & Palmer.
Becoming a doctor was no easy task. Neil had to first finish college and was not accepted into a U.S. medical school for a variety of reasons, including limited spaces from large numbers of Vietnam Vets. Foreign medical schools were a legitimate alternative and after a crash course in Spanish at a language school, Neil and his new bride (married only a week) drove to Guadalajara, Mexico to begin four years of medical school.
Getting back into the American medical system involved a year of unpaid internship at a U.S. hospital after which Neil passed his exams and began a residency in surgery. After two years, Neil realized that surgery was not for him and was drawn instead to the other side of the operating table and a career in the specialty of Anesthesiology.
Dr. Neil Ratner took the bold step of helping to establish the new specialty of office-based anesthesia in New York City. In doing so, Dr. Ratner became an expert in the use of the new drug Propofol, a drug that would play a significant role in Neil's future.
Although Dr. Ratner encountered many celebrities in his anesthesia practice, one would change his life. Eight years after establishing his office anesthesia practice, Michael Jackson walked into an office in which Neil was the director of Anesthesia. Neil became a trusted friend of Michael's and for eight years (1994-2002) periodically traveled the world with Michael as his personal physician and friend.
"I liked Michael right away," states Neil. "I was a doctor and a real music guy and we just hit it off," adding "He was a wonderful friend and I miss him."The detailed story of how they met and their years together is all contained in the book.
Carox Rox: So as not to be accused of being a “spoiler”, this book will be a must for music lovers who want to soak in the atmosphere of New York Village from the summer of ’69 and the associations in the music world that Neil made at this time as a young music lover and up and coming student.
His book is rich with a cast of rock stars and personalities that became his “norm”, For every tidbit of information given throughout the 36 chapters, (317 pages), any music historian will soak in some of the crowd that Neil hung out with over his career and want to explore more of their story. I found myself fascinated by the story of Peter Watts, soundman to Pink Floyd, but at any point in this intimate portrayal of his interesting life, a name will be dropped and interest will immediately be peaked about whoever it is he has bumped into. Including meeting Nelson Mandela but then, read the book!
Neil is frank about his involvement in a legal trial pertaining to a fertility business and short imprisonment. He also, although he does not give specific treatment details, chronicles his friendship with Michael Jackson throughout many years and across continents as well as his conversations and rare insights into Michael Jackson’s life.
This really is a charming book and one to savor as well as one that is so populated with anecdotes that, you just keep turning the pages and follow all the lives of this one man as doctor, rock dock and volunteer doctor from America to Africa and then back to where he now resides with his wife Leann, Woodstock.
Website:www.neilratnerrockdoc.com
Facebook:https://www.facebook.com/neilratnerrockdoc
YouTube (including "Backstage Icons of Rock" series):https://www.youtube.com/neilratnerrockdoc