On February 16, Albuquerque’s Moonlight Lounge opened its doors to a flurry of hardcore metalheads, each one of them ready to celebrate the sophomore release of Fallen Prophets’ sophomore album, titled Void of Eternal Desolation. On hand for this celebration were the following bands: Scarlet Empyrean, Viperwitch, Impaled Offering, and Suspended. Headlining this killer event was Fallen Prophets. 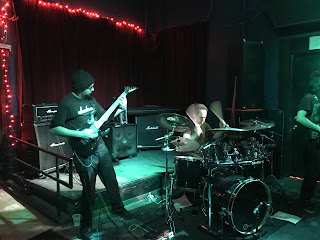 Located at 122 Central Avenue in Albuquerque, New Mexico, Moonlight Lounge is a chill and intimate place, which on concert nights pulls back the tables and chairs that occupy the bulk of the bar to create a solid stage complete with a loud sound-system and a minimal light show. On this night, the crowd was relatively thin at first, but by show time the place was packed, with scores of black t-shirts and pants fading into the darkness.

First up was Albuquerque’s Scarlet Empyrean, a dark instrumental band. What I found most interesting about this band’s set was the eclectic nature of the music. On the one hand melodic (think of early Opeth as an example influence) and ambient, while on the other hand heavy and even brutal, the instrumentals on display rattled the ribcage but also tapped into the heart. Drummer Jerry Langwell dictated the beat, giving the bulk of the compositions a hard and heavy structure, thus making even the ambient songs heavier than the typical shoegaze vibe. Six-string bassist Jeremy Samuel-Dhanraj, sporting a killer beard, is one hell of a bassist, setting down his own distinct groove that at times countered the twin-guitar assault. I found this approach fascinating, as sometimes Jeremy would hit some bass licks to trigger a change in groove, whereas during other points in a song he went his own way, creating a distinct wave of music. Up front were guitarists Katyia Shurkin and Randy Martin. Katyia set down some chest-thumping riffs and rhythms while Randy tackled the leads, showcasing a variety of sounds, from the soft to the hard. The band announced that they had just completed the recording of their debut full-length studio CD, which will be out soon. Fans of instrumental metal should pick this one up. 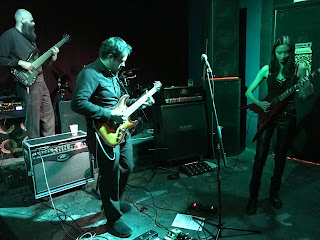 Hailing from Denver, Colorado, Viperwitch play traditional heavy metal (modern metal with plenty taken from the New Wave of British Heavy Metal) bolstered by thrash metal. The band’s set featured songs about post-apocalyptic scenarios (inspired by the current crop of video games), war, and even a libation song. Diablo brought down hell’s thunder, his percussion driving each song with thrash precision but with the groove of traditional heavy metal. Wolf tackled the bass with a low-end vibe while twin axes and banshee screams were handled by the luscious pair of Lynx the Huntress and Siren. One vocal was straight and melodic, whereas the second was screamed and harsh (with reverb). As the set progressed, the songs grew harder and harder, with the banshees calling for a mosh pit. The girls got their wish, and soon metalheads were bashing into each other like crazy. Closing out the set, Viperwitch launched into a cover of Iron Maiden’s “The Trooper.” That’s all the crowd need to go completely bonkers, the pit swelling and horns thrown into the air. Viperwitch brought out the adrenaline, and the crowd screamed for more. I spoke with the banshees and they noted they were recording material for a debut studio album. Can’t wait to hear this one.

Up next came the brutal sounds of Impaled Offering. Right from the start, the death-metal vibes from this band created a frenzied crowd, and it was during this set that the pit became a cyclone, the slams hitting even spectators standing along the periphery. Esophagus Andrew Robertson churned out some of heaviest screamed low notes ever known, with bassist Luis Dominguez rattling the rafters with his bass licks. Ben Segura slammed his kit mercilessly while Kenneth Padilla set down some hardened 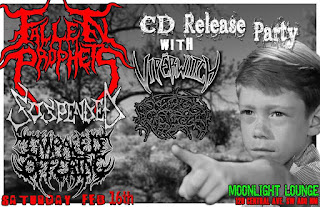 riffs and leads that hinted at an undercurrent of melody. Killer songs in the band’s set included “Cowering inside the Catacombs” (from their studio CD The Agony of Rebirth, available at bandcamp) and “Contortion of Souls” (from Eternity Awaits, also available at bandcamp). It took a while for the smoke to clear once Impaled Offering left the stage—the obliteration was complete.

The crowd thickened for this next band, none other than Albuquerque’s Queens of Thrash, Suspended. These girls don’t know how to give a bad performance, so from beginning to end the crowd went wild. Channing Concho set a relentless pace, her percussive bursts nonstop as the band ripped through song after song. Bassist Jessica Armstrong threw down a solid low end while guitarist Amanda Castillo delivered some fret-burning riffs, rhythms, and blasting leads. Amanda also handled the screech-lined vocals, at times complemented by the low-end gurgles of Jessica. The set took songs from the band’s release catalog, as well as a couple of new songs that really stirred up the crowd. There’s no real way to describe the chest-busting sound that Suspended delivers—before you know it, your hand is in the air as the band’s thrash-laden riffs grab your soul and give it a healthy squeeze. Those itching to hear the band’s sound should check out Reverbnation. 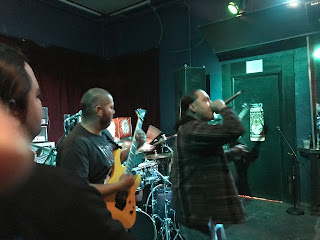 Headlining this night was Albuquerque’s Fallen Prophets, who play thrashing death metal. The band played tracks from their debut full-length studio EP, Whispers in the Abyss, as well as their new EP, Void of Eternal Desolation. Fallen Prophets shred with the best of them, their brand of death metal hard hitting and heavy, but they also bring with them a melodic and technical side, particularly with the guitar. Shattering tracks included “Whispers from the Abyss,” “Form of Life,” and “Picking through Bones.” Soft-spoken drummer Matt Chavez ripped apart his kit, creating some intense percussive bursts. Bassist Geo Arellano set down a restrained barrage of bass thumps while guitarist Josh Whalen crafted some technical riffs, death-laden rhythms, and thrash-driven leads. The mix of brutality with melody is hard to pull off, but the band did this without missing a beat. Out front was vocalist Ray Cordova, whose screams, gurgles, and clean vocals were all on display. 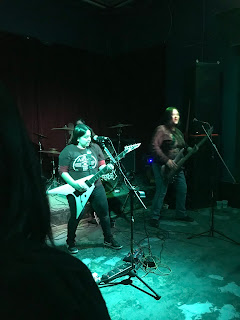 Not a single fan was disappointed this evening, as every band poured out everything they had, leaving blood and sweat in their midst. It’s no wonder Moonlight Lounge is a metalhead’s haven, as this venue knows how to assemble killer bands who deliver outstanding performances. The lineup order itself on this night was worth mentioning, kicking off with darkened melody, progressing through harsh metal to outright brutality, only to pull back to thrash and ending with a combination of melody and brutality. This concert may be in the books, but it will be fondly remembered for the months to come.