Albuquerque’s Fallen Prophets initially played a melodic mix of death metal and black metal. In 2016, the band captured this sound on its debut studio EP, titled Whispers in the Abyss. Three years later, the band has refined its musical approach, evolving into a mix of sister genres thrash metal and death metal. It is this new vibe that has been captured in Fallen Prophets’ second EP, the seven-tack Void of Eternal Desolation. Although the new EP will not be available until later in February at Bandcamp, the band has released a single from the EP, a track titled “Woods of Nevermore.” 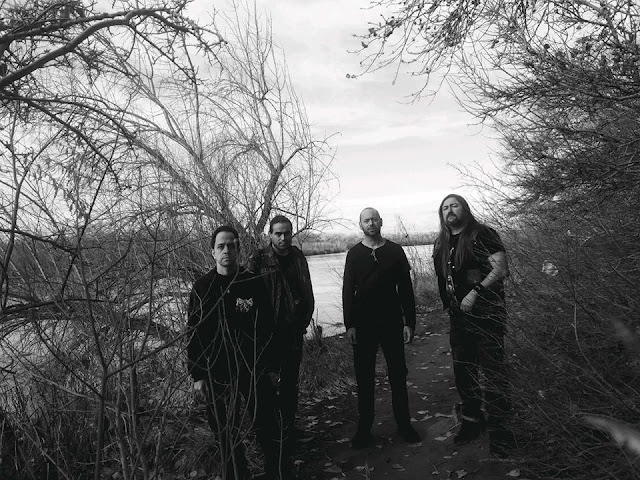 The EP kicks off with the short track “In Nomine Patris” (Latin meaning “In the Name of the Father,” likely taken from Christianity’s trinitarian formula), mixing up acoustic guitar with electric guitar hooks, both courtesy of Josh Whalen. As the instrumental builds momentum, the drums kick in, with the guitar showing its distinct colors, incorporating the pace and technicality of thrash metal with an undertone of melody, one that reminded me of the New Wave of British Heavy Metal (NWOBHM) in execution. There are a few snarling vocals, but these are minimal.


Up next is “Crimson Overlord,” once again led by the guitar antics of Whalen. Drummer Matt Chavez reveals his hard-hitting chops, using the kit to establish a death-metal core. Out front is vocalist Ray Cordova, who uses low-end vocals to great effect—don’t expect the typical bottom-of-the-barrel growls, as Cordova’s lyrics come through clear. Moreover, he augments his approach with some demon scowls, adding to the death-metal vibe.


“Woods of Nevermore” has the band hitting all cylinders, with Cordova switching to a thrash-driven vocal approach while Whalen sets down a speed-metal riff sure to make chests thump. Adding to the lower-end register is bassist Geo Arellano, whose bass licks are definitely felt. This song’s technicality works really well, but the band never loses sight of the song’s beat and vibe, letting the instruments shift in subjugation to the song’s structure. The NWOBHM rears its head again, as does an undercurrent of death metal, particularly when Cordova gurgles his vocals toward the song’s end.


Acoustic guitar segues into the next track, this one a short and moody instrumental titled “Ataraxia.” Next up is “Lividity,” which is right out of classic death metal. Cordova once again uses his back-of-the-throat vocals, with Whalen setting down some bloodcurdling guitar rhythms that bridge the gap between death and thrash metal. From a death-metal perspective, this one is my favorite track, as it strikes a keen balance between the hard and heavy and the melodic and catchy, something technical death-metal bands often strive for.


“Picking through the Bones” begins with some lush acoustic guitar, quickly complemented by an electrical riff and followed by Chavez’s hardened percussion. This song is more in keeping with blackened death metal, evoking a sense of the disturbing but remaining true to the core of black metal. “Picking through Bones” hearkens back to the Fallen Prophets of old, and it shows that even though the band’s instrumentation has evolved, it can still create and old-school sound with a more refined and intense approach. The use of the acoustic guitar to establish melody, which is picked up by the electrical guitar, only to morph into outright metal, is something metal ears will instantly dig and relish. Closing out the EP is “Exitus,” an instrumental that reminded me of exit instrumentals by the first wave of death-metal bands. 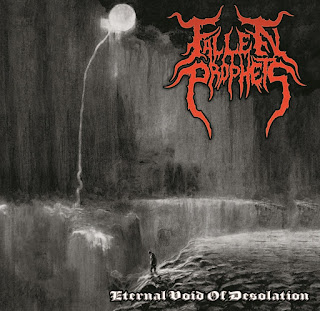 Fans of old-school death metal and thrash metal seeking modern instrumental approaches and strong songwriting should pick up Fallen Prophets’ EP Void of Eternal Desolation. Those in New Mexico or visiting the Land of Enchantment should take the time to experience this band live. You can check them out on February 16 at Albuquerque’s Moonlight Lounge, with the band hosting a CD release party with thrashers Suspended (a personal fave), death-metal monsters Impaled Offering, Colorado thrashers Viperwitch, and dark instrumental band Scarlet Empyrean. If for whatever reason you can’t make the scene, Fallen Prophets next plays at Albuquerque’s killer venue Launchpad on March 10.
Fallen Prophet