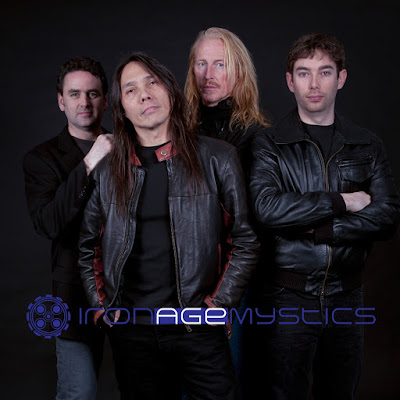 "Iron Age Mystics represent the current cutting edge of political rock music, so say many. The strengths of this band range widely, but the message of each song consistently occupies the driver’s seat. Overall, the recordings and themes are intended to deliver a bracing sense of self-empowerment in the face of what appears to be overwhelming odds. The bottom line here is: if you’re willing to take on some of today’s most pressing issues disguised as well-crafted rock songs, this might be the band for you."-- IAM
TUA: There is something to be said for a name. Sometimes it means something, other times it just sounded right. Where did your band name come from?
It came from my imagination. The ‘Iron Age’ part is meant to imply that we live at a very low point in our culture. The ‘Mystics’ part is to imply we are people who see through it.


TUA: Describe the music you make. (Give details to its sound, lyrics, and structure)
The music is melodic hard rock with a lot if dissonant chording and a few pretty crazy twists and turns in the arrangements. What stands out as being most distinct about this album is that lyrically the themes are 100% social, political and spiritual.

The title track “Pride Before The Fall” addresses the destructive nature of blind patriotism, amidst other things. “Information Outlaw” is a tip of the hat to whistleblowers. “Thought Police” is a dark, Orwellian song about the rise of the surveillance state. “Big, Bad Motherfucker” is a tongue-in-cheek shot at corporate greed (probably the closest this record gets to be humorous). Both “Down Deep” and “You’ve Got The Power” are calls/anthems for unity and universal brotherhood. As I mentioned above, the themes are 100% social, political and spiritual.


TUA: What formats do you prefer to release your music on? Digital, CD, Vinyl, Cassette, All the above?
Vinyl is fun and currently quite trendy. IAM didn’t do it because that would have called for us to remaster the entire album. CD is practical, albeit a little old fashioned these days. Digital is convenient for most people but lacks the romance of holding an entire album in your hands, artwork and often lyrics included. Cassette? I don’t think anyone under the age of 25 would even know what that is. Perhaps that’s not such a bad thing…
TUA: Your current single playing on TUA's list tell us about the song. If there is a music video that goes with it, please share the link.
Our current single is “Pride Before The Fall.” It’s a straight up, hard-hitting anthem with a message intended to rouse and inspire people to unify, get out, march and protest against current social injustice. Basically put: get off of your couch and stand up for the common good.

We have two videos for this song: one short video that was shot in the recording studio, and one full-length video with IAM banner and lyrics only.

TUA: In your opinion why is playlisting important or not important to you and music? What suggestions might you give to other bands wanting to utilize Spotify to its fullest?
I can’t give much advice on this one because we’re currently not on Spotify yet. Everything we sell (CD’s, T-shirts, Downloads) is done directly from our website under the IAM umbrella. Not that I’m telling anyone to avoid Spotify or any other digital media outlet, and I’m not saying that IAM won’t ever be. I can testify through my work with other bands, you won’t likely make much money on downloads. For the most part, a band will make their money playing live and on solid merch. This has been the trend for well over a decade now.