Song of the Month My Dying Bride’s “Sear Me MCMXCIII”

From the full-length studio release, Turn Loose the Swans 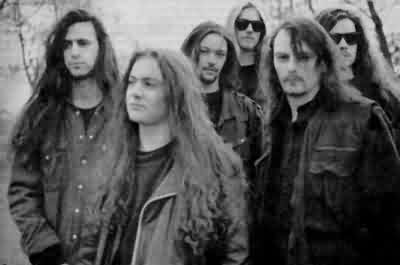 “Pour yourself into me, our time approaches so near, that I sign
What danger in such an adorer?
We dance and the music dies
We carry them all away, as we glide through their lost eyes
You lift me above myself, with the ghostly lake of your mind
Arise from your slumber in my arms
Your beauty took the strength from me
In the meadows of heaven, we run through the stars
Romantic in our tastes
We are without excuse
We burn in our lust
We die in our eyes and drown in our arms”

Formed in 1990, England’s My Dying Bride plays bleak and bitter doom metal. Along with bands such as Paradise Lost and Anathema, My Dying Bride served as a forerunner for the doom-death, funeral doom, and gothic-metal genres. From the beginning, My Dying Bride has played its compositions at a very slow tempo, using keyboards and violin to evoke a sense of pain and despair.

After released its debut in 1992 titled As the Flower Withers, My Dying Bride in 1993 unleashed what many fans consider one of the band’s best full-length studio albums, this one titled Turn Loose the Swans. Unlike the band’s debut, this album took a full step into the realms of doom-death and gothic metal, with Martin Powell augmenting his keyboard performances with the violin. Mastermind and vocalist Aaron Stainthorpe would slowly begin to abandon his death-metal grunts and growls, instead relying on low-end clean vocals and spoken word.

Although tracks such as “Your River,” “The Snow in My Hand,” and “The Songless Bird” feature guitarists Andrew Craighan and Calvin Robertshaw, as well as drummer Rick Miah and bassist Adrian Jackson, there are two tracks that feature only Martin Powell on keyboards and violins and vocals: the closing song, titled “Black God” (with Stainthorpe and guest vocalist Zena) and “Sear Me MCMXCIII.” These two compositions are called out because they are representative of a new sound tried out by the band, one that evokes a dream-like atmosphere drenched in despondency and a distance sense of bitterness and pain. Without traditional rock instruments, the vibe is less doom-death and more gothic in execution.

The song “Sear Me MCMXCIII” originally appeared as “Sear Me” on the band’s debut album. In this incarnation, the song is pretty much in the doom-metal mold, complete with some beautiful guitar riffs and Stainthorpe using his death growl. The lyrics are also different. In 1999 on the band’s The Light at the End of the World studio album, the band recorded a third iteration of the song, this one titled “Sear Me III,” which is similar to the original composition, with Stainthorpe using clean vocals and the band evoking a more gothic-metal sound.

Of these three versions, my favorite remains “Sear Me MCMXCIII.” The song starts off with piano and keyboard, with the piano establishing rhythm and the keyboards creating a somber atmosphere. Martin Powell also uses the violin to excellent effect, drawing forth the strings to weave a tapestry of desperate despondence. Stainthorpe’s clean vocals are filled with misery, delivered over a melancholy piano. The simplicity of the performances enables the instruments to stand apart. There are no glaring keyboard washes or stings or any guitar or drum embellishments. Most of the song is either Stainthorpe singing over piano or over violin. Even when the keyboards are used late into the song, they are used to bolster the words delivered by Stainthorpe. 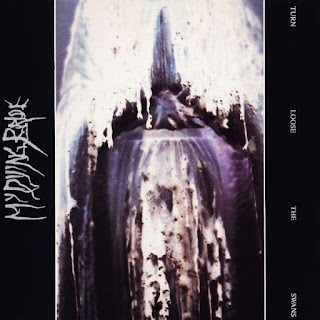 Lyrically, Stainthorpe weaves a tale of love so great it kills. Later acts such as Type O Negative would also delve into the realm of intense romance, crafting songs of desperation by males to fulfill the needs of females. Stainthorpe begins by having a pair of lovers pouring into each other, asking the question, “What danger in such an adorer?” The answer comes right away, in that the lovers' dance and the music must die. Romance drives both of them, and the result is that their lust burns—they die in each other’s eyes and drown in each other’s arms.

Despite various lineup changes over the years, My Dying Bride continues to release albums and perform live, with Stainthorpe still fronting the band.