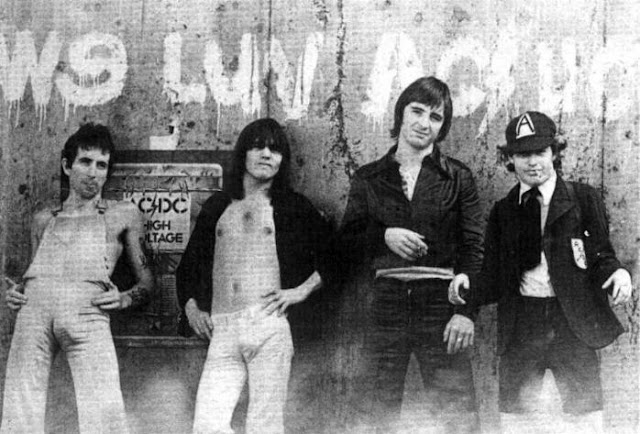 
“Well I met her in the garden
Underneath that old apple tree
Sitting with a handful of flowers
Looking as cool as can be
We talked away a couple of hours
Then she laid her hand on my lap
Oh, I thought, ‘I got to be dreaming’
I didn’t know I fell in her trap
Then she made me say things I didn’t want to say
Then she made me play games I didn’t want to play
She was a soul stripper, yeah—
She took my heart
She was a soul stripper, ooh—
And tore me apart”


In November of 1972, brothers Malcolm and Angus Young formed the band AC/DC, with the name inspired by the label found on an old sewing machine. The earliest incarnation of the band featured Dave Evans on vocals. The delivery from Evans was more in keeping with glam rock, influenced by Gary Glitter, and some of the songs on the band’s subsequent Australia-only full-length debut release High Voltage (in keeping with the AC/DC name) retained some facets of glam rock, namely a return to the vibes of the early rock of the 1950s and the overt bass rhythms of pop and soul music.


The first song on the second side of the album (or track 5 on a CD) is “Soul Stripper,” which was originally written under the title of “Sunset Strip” by Malcolm Young and Dave Evans. The song was then rewritten by Malcolm and Angus, with a lyrical assist from the dynamic and hard-charging Bon Scott.


“Soul Stripper” starts off with remnants of the catchy structures of glitter rock, with none other than guitarist Malcolm Young setting down a thundering bass riff. Usually the rhythm guitarist of the band, Malcolm on this song played the lead, with his brother Angus setting down some catchy rhythms and hooks over which Bon Scott sets down some killer vocals. Handling the percussion on “Soul Stripper” is Tony Currenti. Currenti’s percussion is infectious, working with Malcolm’s bass to create a stellar rhythm section. Malcolm’s leads are more restrained than those of his brother, but the glam rock influence here works really well, with the stinging edge of the piercing riffage separated by sustained notes that enable the leads to breathe and flow freely.

Lyrically, the song tells the tale of a female’s seduction of a submissive male who quickly succumbs to her whims, first by making him say things he would rather not and then playing games he would rather refrain from playing. As things get hot, the female pulls out a knife, thrusting the blade into him and then twisting it around. By taking the poor dude’s life, the girl earns the moniker of “Soul Stripper.” It’s an interesting image, evoking a female’s penetration of a man.


In 1976, the band would release a male response to this song with “Squealer,” which appeared on the band’s 1976 release Dirty Deeds Done Dirt Cheap. Although there is no violence in “Squealer,” it tells of a dominant male seducing a female with his sexual charms. There is a hint of possible violence when Scott delivers the line, “And I don't think she’ll ever ball no more—fixed her good.” As with “Soul Stripper,” “Squealer” brings with it an overt bassline and a seductive edge in Scott’s vocal delivery, although the overall structure of the song was in keeping with the band’s hard rock foundation.


International fans would not get a chance to groove to “Soul Stripper” until 1984’s international release of the EP ’74 Jailbreak.
AC/DC Angus Young Song of the Month Stripper