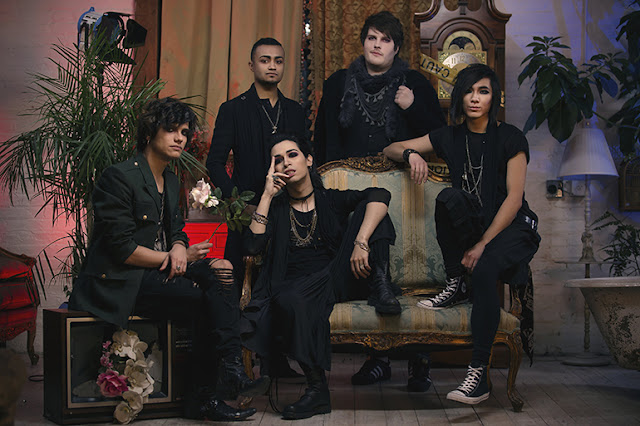 Talk about how music has influenced you individually in your daily living.

Felix: There is music around me almost always. Whether lightly in the background as I work, or when I’m focusing on a song and breaking it down piece by piece in my head. There isn’t a single day that goes by where I don’t listen to it in some capacity

Joel: It makes me feel a multitude of emotions, it motivates me to overcome difficulties, inspires me, makes me think of certain events in my life, and it even educates me. I would feel incomplete without music being a part of my life.

JB: It's weird because I listen to music a lot less than I used to. I used to constantly have headphones in my ears, but it's less common now. When I listen to music now, I like to really listen, and hear all the emotion and subtle nuances, instead of it just being a background track.

Where do you each find yourself listening to music most often?

Felix: Usually at home, when I’m looking for new music. I’m always looking up new artists to see what kind of music they’re making and how they’re making it

Joel: I’m always listening to it in my car or listening through my headphones while I’m walking on my way to work.

JB: Usually my car honestly. It seems to be where I have the most free time.

What are your favorite brands to use when it comes to the instruments, mics, amps, pedals and so on? Why do you favor them?

Felix: So much new stuff comes out all the time that it’s hard to pick favorites, I usually just play with whatever sounds good to me. Although I will say, ESP Guitars until I die

Joel: I recently got into Sterling by MusicMan Stingray basses after playing one, and I LOVED IT. The sound and feel are incredible. The tone is a perfect balance of treble, mids, and bass that makes it smooth, yet ferocious

JB: I love Ibanez or Fender for guitar. Guitarmory pickups. Line 6 for effects. Prs for amps.

Talk about your current project, "No Goodbyes", Its conception. How it evolved. The storyline behind its development or any anecdotes that may have occurred during the writing/recording process?

Felix: Our original demo for No Goodbyes was a bit grittier and bare. Throughout its development we decided to make it a bit more polished and full sounding, I think it conveys the emotion of the song a bit more this way. I love the way it came out in the end

Joel: Whenever I track bass, my goal is to create a bassline that has groove, and not stick to just root notes. I enjoy challenging myself, and I sat with Felix for the duration of my session to see which licks and riffs would fit the feel of the song.

JB: It really just came out when we sat down to record. And that might sound like a really uninspired answer, but I found it to be the happiest we've been with the process. Instead of worrying about every little bit and planning it out and letting it become contrived, we just let it happen. And it turned out to be a beautiful thing.

Where there any conflicts during the recording process? If so, how did you all overcome them, if not what do you think is Skiver's formula that keeps everyone chill?

JB: Not really. It started with a riff that we had written and we just kind of kept adding to it, and you can really hear each of our styles come out in the layers that we added personally. It was a really great process.

Joel: No not at all. Either we have our individual parts well thought out, or if we struggle with a certain part of the song, we give feedback and suggestions and try a variation of it instead.

Felix: Our formula that keeps everyone chill? We just all love each other

Is there a particular part you enjoy more than another in the process of a project?

Felix: During the recording process, figuring out how and what to layer in the track to give you even more interesting sounds

JB: I really like writing. My favorite part of music, in general, is writing it out, telling a story, and letting people know how I feel.

Joel: I find the entire recording process fascinating. It’s like constructing a building from the foundation, up to the roof. During that process, we give feedback and suggestions to each other, and I find that to help greatly.

How do you know when a song is done and ready to be taken to the recording studio and produced?

Felix: At a certain point, it just feels right

JB: I think that when the idea comes across, and people will understand what we're trying to say with the song, it's done. I think it's important not to go overboard or it'll become busy. You gotta catch it when it's just right.

Joel: It all comes down to each of us being satisfied with what we wrote.

Read somewhere that although you are a newer band, all of you are relatively seasoned musicians. How does a band stand out in the river of Spotify and YouTube nowadays?

Felix: Everything is oversaturated, and it’s hard. Once you start building momentum, you really can’t stop or you’ll fall beneath the other thousand bands that want to be heard. Figuring out the algorithms of these platforms helps as well

Joel: Two things: make great, authentic music, and have a solid image. There’s a reason why artists like Bowie, My Chemical Romance, and KISS were successful. Not only did they create music that’ll last an eternity, but how they presented themselves through their clothing, and makeup, made them stand out.

JB: It's definitely harder than it ever has been. I think a big part of it is you have to go all in. I think the desire really has to consume you, and you have to let it be your life.

Looking towards the short and long term of where you might be currently- where do you see yourself as an artist/band in 2019 and beyond?

Felix: As long as people are interested in the music we make, we’ll keep making music. Large scale or small scale.

Joel: Hopefully still a band, but with a few tours under our belts, and bigger opportunities. I would love to see us play a festival with bands that we’re fans of.  I believe in this band, and I know what we’re capable of.

JB: I think right now we're looking for constant growth, both in fanbase and as musicians. We have some really cool music coming, that we're super proud of. I think it's gonna be a big year for us.

A final piece of advice you would like to impart.

Felix: I’m the last person that should ever be giving anybody advice haha

JB: I think it's just all hit or miss, and they just never miss. I think it's important to keep that in mind.