Interview with The NorthmeN 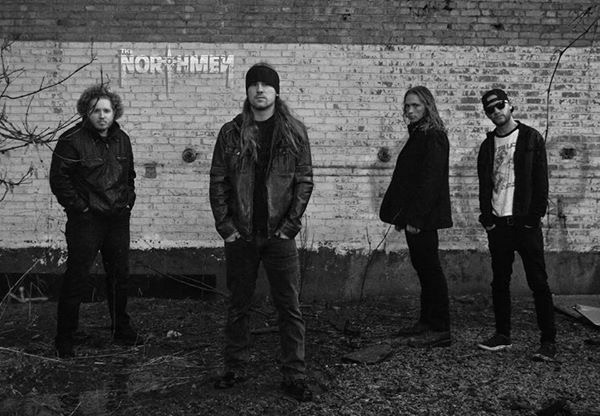 Ray Carlson: Where did everyone grow up?
Jeremy Lawlor: I was born and lived the majority of my formative years in a very rural area called Lorraine, NY- but I still went to school in Watertown where I eventually moved as a young teenager. That’s also where Matthew and Brendan grew up (Watertown) directly across the street from one another. Alix grew up in another very small town even farther to the north called Malone, NY.

Ray Carlson: At what age did each of you pick up a musical instrument? What instrument did you each learn first?
Jeremy Lawlor: Alix was given a crash course in guitar at about 7 by his uncle- but hadn’t regularly practiced an instrument until he took piano lessons at 8. But it wasn’t until he was about 14 that he truly dedicated to the guitar and taught himself.
Matthew decided to follow in his father’s (Rick) footsteps at about 14 and start learning guitar as well. At about 16, he grew an immense affinity for the drums and dedicated to them full time. Brendan was encouraged to take a shot at guitar at an age around 12- and just taught himself with Matthew and me always playing together. I received my first guitar from my mother at around age 10 and practiced on and off until I figured out I really wanted to play rock and metal religiously about a year later. I taught myself as well.
Ray Carlson: The music scene is different from city to city. What is it like at home? Is there strong local support?
Jeremy Lawlor: The music scene locally is very saturated with talented musicians considering the population size of Watertown. Although, It’s a very tough scene to get by playing original music, the majority of the community around us is incredibly supportive of what we are doing.
Ray Carlson: Do each of you have a favorite band Tshirt you like to wear while performing?
Jeremy Lawlor: I don’t think anybody has a favorite shirt.. if it is anything novel it’s probably a Metallica or Black Sabbath shirt. But it varies. With the exception of the Kyd... he religiously performs shirtless.

Ray Carlson: Talk about your current project, "Forevermore", Its conception. How it evolved. The storyline behind its development or any anecdotes that may have occurred during the writing/recording process?

Jeremy Lawlor: "Forevermore" is really the genesis of our prominent writing process. It was kind of the first time we discovered our identity as songwriters. With other songs before- it was kind of like feeling our way in the dark. We had riffs. We had some really vague and general concepts. We experimented with different techniques for completing half-written songs- but this was the first time we really broke it down to what it is today. It was like, we had the main rhythm and our own signature style of riffing all ready to go, and we just took a moment and thought about how we could make it the best version of itself. We didn’t want to ruin it or over complicate it. It was the first time that we really put a song through the gauntlet of criticism. The Crucible. The band is also a “pseudo-council”, and every idea gets tried and tested, and then judged accordingly - “is it best for the song as a whole???” Whatever the answer- it goes from there. Forevermore had the potential to be a wild array of colorful melodies, dueling guitar solos, and just an outright overindulgent outro. But, in the end, we knew we didn’t want all the colors to mix together to be brown. We thought we had a deeply, emotionally melodic song that could grab any audience while upholding the integrity of our style simultaneously
Ray Carlson: Were there any conflicts during the recording process? If so, how did you all overcome them, if not what do you think is The Northmen's formula that keeps everyone chill?
Jeremy Lawlor: Again- it all just comes down to “the council”. Is that lyric/riff/solo or whatever best for the flow of the song? It’s not about any one individual. We all each have our own unique ideas individually- but we are all subscribed to the fact that each idea is going to get scrutinized and picked apart. Maybe it’ll stay the same. Chances are, it will get altered in some way. Everybody is on that same page. The Northmen is more than each one of us- and that’s how the songs should be. Bigger than anyone.
Ray Carlson: Is there a particular part you enjoy more than another in the process of a project?
Jeremy Lawlor: I love the idea of writing songs... but what I love more is when they are actually finished. It is still so daunting. Kind of making your ideas vulnerable. And worrying about half completed songs. But when it’s done you know it’s something that has the stamp of approval on it. From there you have the confidence to wave that banner. So, other than playing it live with all the energy it deserves- it’s super fun recording it. No matter how tedious recording can be- it’s fun pushing the limits of your skills in the studio and making the song sound the absolute best it can sound.

Ray Carlson: When performing and recording "Forevermore" was there core energy you all were looking to channel into who you are now?
Jeremy Lawlor: I guess I’d say the core energy was the excitement of “is this the one?” “Are we good songwriters now?” I can’t say that there is a definite answer to either one of those... but hearing a song like that played back to you for the first time- a song that you believed would be great, and believing it is indeed great- it certainly gives you pure joy if anything. And the will keep doing what you’re doing.

Ray Carlson: In this fast-paced digital world of music how does a band stand out in the river of Spotify and YouTube nowadays?
Jeremy Lawlor: We are currently figuring that out... it’s certainly not easy. We are learning every day. Everything we can do to take the next step. Social media is obviously huge. People can watch a live concert now from the comfort of their home... but now it’s so advanced it’s like there is an algorithm that has to pick you up for them to see it if nobody has ever heard of you before. So it is exactly like a river- and if you don’t make enough waves, you will just be a small droplet being swept on by in that river.

Ray Carlson: Looking towards the short and long term of where you might be currently- where do you see yourself as an artist/band in 2019/2020 and beyond?
Jeremy Lawlor: 2019/2020 will most certainly see the creation of a new, full length album, and hopefully label support. Naturally following thereafter, we imagine a tour and the publicity that accompany the release of a well supported album. Beyond... hit after hit. Undeniable success. That is the goal.
Ray Carlson: A final piece of advice you wish someone had given you ten years ago?
Jeremy Lawlor: Absolutely do not compromise. Do not do anything you don’t want to do for the entirety of your life. If you have an undeniable passion- don’t be afraid to peruse it because MAYBE somebody thinks it’s a stupid idea. If you don’t have a passion- find it. Don’t pay attention to anything discouraging you. Be prepared to work hard. Be prepared to see failures. But always keep your eye on the prize and don’t stop charging after it, no matter how many times you stumble, until you grasp it.
interview The Northmen