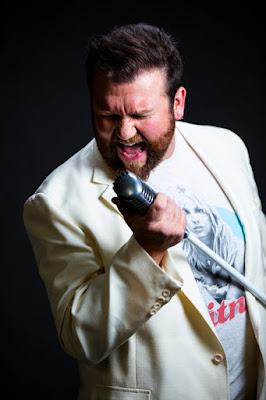 The perfect kickoff summer song brings us to the shores of Lake Erie. With a pitcher of lemonade, a frisbee, your dog and great friends Shawn Perry's style and humor launch us off into those long summer days of no work and all play! "Lawnchair" is our summer anthem.

Cam Longam: Looking over your history you've had your artistic finger on the pulse of many projects. Talk about some of those you have been involved with over the years.

Shawn Perry: Man...I have been writing original music since I was like 12 that's a lot of ground to cover ...long story short the first few bands I was in were all "Christian" bands like Stryper or Skillet.... Very heavy but we kept the lyrics PG and God-focused... I had a lot of problems with folks going to church on Sunday ...and for comedy let's just say pookin' for nub on Monday... At some point, I just decided to make music with my friends it was a lot easier than dealing with all of the other nonsense...

Now I get to make music about BBQ and sports cars ....so it all worked out-

CL: Is there any artistic or creative punch you would still like to try? Maybe Cooking With Perry?

Shawn Perry: I almost opened a restaurant, if I get Snoop on my next single who knows maybe he can hook me up with Martha Stewart and we can make this happen.

CL: How did an Ohio landlocked dude find his way to a sunny beach to sip lemonade, throw a frisbee and lounge in a lawn chair?

Shawn Perry: I get around man....but we actually filmed what whole video in Ohio. Lake Erie has some beautiful waterfront, people think we went to Florida or something...nope. down the street from my house.

CL: Where did the car come from in the video? Pretty sweet.

Shawn Perry: There are actually TWO Corvettes in the video...The orange one belongs to one of my friends and our sometimes drummer Chris Cassell...he is the one playing bongos in the video. He is also the dude shaking his ass in Daisy Dukes in our redneck video. The other one this guys had it for sale parked outside the auto parts store we filmed at. I told him what we were doing and he was kind enough to let us use it...I really want to buy it :)

CL: I had read that you are involved in some type of political activism? What is that about?

Shawn Perry: I am involved in all kinds of causes. I have fought against opioids, for fixing our local roads and for patients rights...I may have run a few drug dealers out of town..my other job is Batman.

CL: Do you find yourself deep in complicated matters or should we say complex and intriguing topics?

Shawn Perry: I recreationally read books on astrophysics by Stephen Hawking and Brian May.

CL: Driving forward after this single, what are you up to and where can find more of you?

Shawn Perry: I am actually sitting on like an album and a half worth of music just trying to see what shakes out with this lawnchair single...I have a couple brand new songs that I haven't even really done demos for yet one of those will probably be my next single. We are hoping to have a whole new full-length album out sometime next year and possibly another single in the fall of this year- AND

I'm like Johnny Cash I'm everywhere Man... if you're on social media it's either the Shawn Perry or ShawnPerryofficial... Or you can go to my website www.shawnperry.Country

CL: You must have something planned music wise for the Fourth of July, what would it be?

Shawn Perry: .... well if I had my way we'd be playing our song We Are America from a universe-wide simulcast from the Lincoln memorial but unfortunately nothing that elaborate plan this year we actually are doing a very rare local show for a friend of mine that weekend...