Interview: A Period Time Captured in the Powerful Vocals of Samantha Alice of Carpathia. 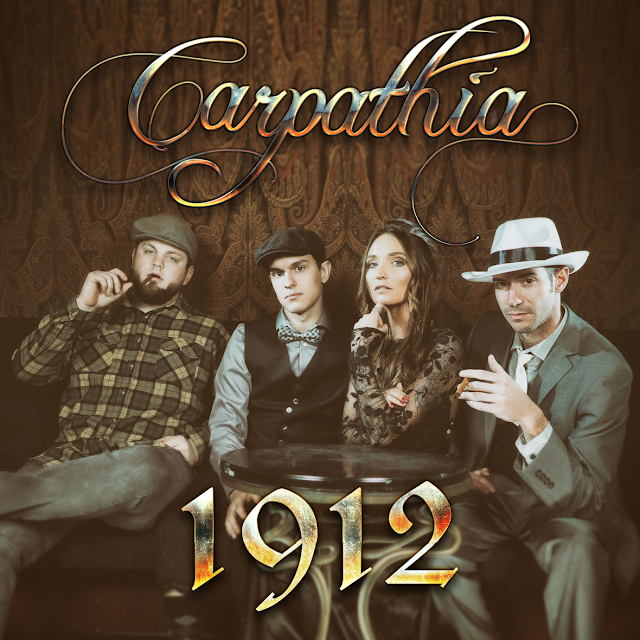 A powerful presence lies in a voice that is spellbinding. Samantha Alice recently sat down and talked with BANGS! about the historical ties in's to their new EP '1912' and the titles of each track.

Rachel Lyle: What was it over these past 3 years that happened to solidify what and where Carpathia is now? There seems to almost be a story here that needs to be told.
Samantha Alice: It all started with Bobby and Jason. Their family knew each other well and basically convinced the two of them to start a band together. Bobby had met Andrew in a previous project, and Andrew actually reached out and asked to be a part of their project, which worked out super well for the guys. They played instrumentally for over a year together, albeit looking for a singer, but still super proggy stuff. It wasn’t until 2016 that Samantha had her last performance with her previous band, and Bobby happened to be in the crowd that night and contacted her literally the next day. The band itself had such an awesome sound, something entirely unique, and at first, Samantha and the guys were attempting to write over the instrumental songs, which was not easy, to say the least. Certain songs you can actually listen to on youtube, like Culture Shock and Telepathy, Heavens Ending…but, if we were being honest, things didn’t start to actually make sense and blend well until after their first studio session in No Boundaries with producer Chris Piquette. We had to actually figure out how to take each piece of our own unique styles and influences and learn to use them all together in harmony, and now, it’s like breathing.

Rachel Lyle: Listening to the vocals on the new EP 1912 sometimes there seems to almost be a hard glance over to the hard pop rock. The essence of Pink and Evanescence come forth. Who were some of your influences Samantha?
Samantha Alice: I’ve never gotten Pink before! That’s cool! My influences range from Chris Cornell to Eddie Vedder, Lacey Sturm and the entire band Chevelle.

Rachel Lyle: Talk to us about the pilgrimage that formed the band name Carpathia, who is the history guru in this band?
Samantha Alice: Andrew, one hundred percent. He’s a genius when it comes to naming songs in relation to badass historic moments. We’d been struggling to find a name, as many do, and Andrew had been researching names of Captains of ships and stumbled across the RMS Carpathia, which was the ship that saved the remaining survivors from the Titanic shipwreck in 1912.

Rachel Lyle: Even the four tracks on this EP entitled '1912' strike a match that has lit a history buffs curiosity. Take us on your journey through this EP if you would please.
Samantha Alice:

The actual song is about respect for Soldiers of War and how certain individuals need reminders of just how much they have sacrificed for us.
Rachel Lyle: Challenges along the way in this production that inspired you all to see it through, surely there had to be some?
Samantha Alice: Oh, absolutely. I think I wrote Raising Arrows three different ways because I was attempting to see through another’s eyes, another's pain, and that at times felt wrong..and it was extremely frustrating haha. And even when we went into the studio with it, we ended up rewriting it again! So that song gave us the run around for sure. There were many times we had to all try and be more patient, as multiple aspects leading up to this release had not gone our way at all. If it had been up to us, we would’ve released this much, much sooner.
Rachel Lyle: You have some great shows coming up soon. Isn't playing with Sponge and Puddle of Mud one of them?
Samantha Alice: Yes! That’s July 13th, which would be our second time with Puddle of Mudd. They’re great. We have another couple gigs in MA as well, July 27th at Poor Richards Pub and another show Aug 16th in Salem at Koto.
Rachel Lyle: Where to next on this voyage in the music world Carpathia?

Samantha Alice: Well, just these past few days we have been in the studio recording our 2nd EP which we are already unbelievably stoked to share with the world. We also have plans to tour this coming Fall.
1912 Carpathia Sacrifice