With Ronnie Sals Guest Writer for BANGS!
Channeling Joan Jett, Ozzy Osbourne and Dolly Parton, Emma Garell from a very young age began to feel the sound in her soul as her thirst for rock music bloomed. As an artist her powerful presence and yet calm demeanor create a somewhat mysterious person both on and off stage. Her debut single/video "Destination Anaheim" without a doubt has opened the door to what is certain to come.
Ronnie Sals: Congratulations on "Destination Anaheim" who wrote the song?
Emma Garell:  Thank you! I wrote the lyrics and melody, then Andrew Rohlk wrote the guitar and CJ Alicea (my drummer) and  Rich Stine (my producer) came in to help with the final arrangement right before we went into the studio.

Ronnie Sals: Who are all the band members and how did you all come together? Introduce us to your team.
Emma Garell: We have had a recent change up on guitar.
--Camden Harrahy is now lead guitar and we met at School of Rock in late 2014 when we were in a Black Sabbath tribute show together. Camden has his own band The BBC and is in college in Nashville.
--Andrew Rohlk has recently left the band to tour with Pale Blue Dot.  We met in late 2014 and he became my mentor at School of Rock. We both left the School of Rock program and he pursued his solo jazzy-pop career while we started working on original music for me.
--CJ Alicea is our drummer.  We also met at School of Rock, where he still works.  CJ also plays in a variety of bands with different genres and tours occasionally with some of them. I am pretty sure he can teach and play any kind of drum.
--And surprise! Sammy P. Stiles on bass. We did not meet at School of Rock. He was actually the bouncer at one of the venues where I was playing frequently, The Camel. He is in another band called the Mad Children and is a DJ on WRIR 97.3, in Richmond, VA.

Ronnie Sals: The video certainly sells the lyrical sexual appeal of the music. This being really one of your first music videos Emma that is gaining a lot of attention- is this the sound that is at the heart of who you are musically?
Emma Garell: Yeah! I hope so, I wrote it a year ago.  This song really captures who I was last Summer and the new stuff coming is about who I am now. I am a whole year older, I am very young and still learning.
Ronnie Sals: Your vocal awareness captures some of the greatest a bit of Joplin, and attitude of Weiland and GnR. Do you ever feel like you're stepping into another person shoes when you rock out?
Emma Garell: Nope, I have never felt that way. I am a very internal performer...a lot going on in the inside.  I am there having my very own intimate therapeutic moment on the stage while people are watching.

Ronnie Sals: Who is Emma Garell the rock star?
Emma Garell: As far as making music and writing, If I feel inspired to write a whole song I do it.  That is very unusual though, mostly a hook or a series of lyrics come to me over a month or so and then I take it to my co-writer/producer Todd in Northern, VA and we make something with it. On my own I use the piano to write my melodies and I don’t play any other instruments. When I go out, which is rare...I do it is to support my friend’s shows...nothing too big.  Shows not concerts...I don’t go see big artist that often just the small bars like The Camel. I like local music around town, I don’t like the impersonal larger shows. You know, the chillaxed environment. I prefer that atmosphere. 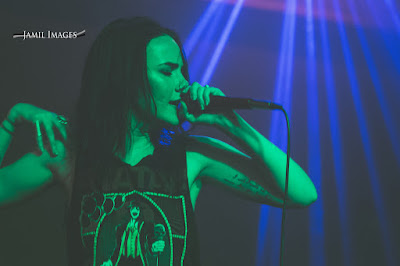 Ronnie Sals: Tell us who is Emma outside of rocker we see in this single/video.  What are some of the other things you enjoy doing?
Emma Garell:  I guess I am a little more low key than people would think and I spend most of my time with our dogs on my farm just doing homestead stuff. I have a close tight-knit circle of friends, some are musicians and some are not and I spend most of my time with them or on our farm. My boyfriend and I live in a tiny farm house on a larger horse farm and we spend our “off” time building towards a self-sustaining homestead. The basics of simple living are really important to me. I try to be aware of my footprint as far as consuming and am learning what I can and applying it to our homestead.  We grow the basic table foods...tomatoes, cucs, squash, peppers, and herbs. I love just being with our rescued dogs (Ford & Ellwood), which are my boyfriend’s dogs. Don’t tell Mitchel, but I fell in love with Ford before I fell for him. On our farm is my favorite place to be. I am me all the time on and off the stage.

Ronnie Sals: You have really just opened the door to what music holds for you. What's your game plan?

Emma Garell: Get out there and do it, write the best songs that I can and work as hard as I can.