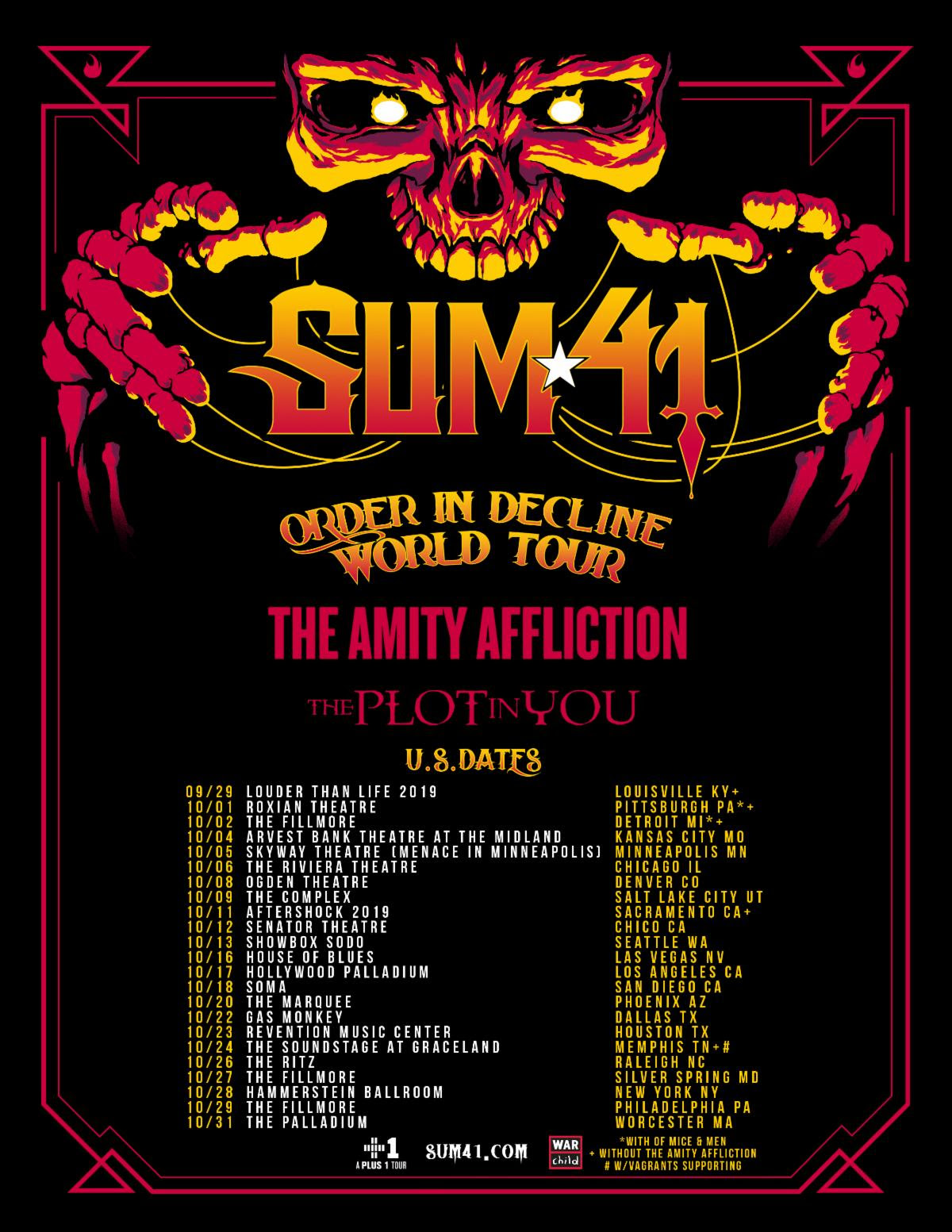 "The 15-year anniversary of the record was befitting of a revisitation;
coupled with the velocity of many of the tracks on Order In Decline,
it's a downright no-brainer." - Alternative Press

September 18, 2019 - Sum 41 are gearing up for their upcoming North American headlining tour in support of their most recently released record, Order In Decline. While putting together a set list for this massive run of shows with The Amity Affliction and The Plot In You, the band knew they wanted to do something special for the fans. In addition to launching this world tour for their seventh studio album, the band is celebrating the 15th Anniversary of multi-platinum album Chuck this year.
"We are so excited to be hitting the road throughout North America for the Order In Decline World Tour. We'll be combining two of our heaviest albums, as well as fan favorites from throughout our career into one behemoth sized set each night. We couldn't let this monumental anniversary pass us by and we are so ready to bring 2 full albums (and then some) worth of music to fans across the United States" shares front man Deryck Whibley. Each night on the upcoming tour, the band will be playing hits from Order In Decline, Chuck and the rest of their storied catalogue, making this the longest running live show the band has played to date in North America. In an exclusive interview with Alternative Press, Whibley shares "Some of those songs we're going to be playing, we've never played ever."
Ahead of the release of Chuck in 2004, Sum 41 were in the Democratic Republic of the Congo filming a documentary for War Child Canada on the effects of the Civil War, so it is only fitting that the band aligns themselves philanthropically with the organization again on this upcoming tour. With the help of PLUS1, $1 from every ticket sold on the Order In Decline North American Tour will go to War Child to support children and families in communities affected by war throughout the world. More information can be found below or at http://warchildusa.org/ and http://warchild.ca/.
While the band was in the Congo, the cease-fire in the civil war quickly ended, leaving Sum 41 literally in the middle of RPGs, mortar rounds and gunfire. A UN peacekeeper named Chuck helped the band and 40 other people evacuate their hotel safely during the fighting; therefore saving their lives so they aptly named their third studio album after him.
Order In Decline, which was released in July via Hopeless Records, has solidified that Sum 41 is here to stay. It secured #2 spots on both the Current Rock and Hard Music Album Charts, #3 on both the Alternative and Record Label Independent Charts, as well as #8 on the Top Current Albums chart here in the US. Worldwide, the success continued with a #2 spot on Canada's Top 200 and Top Current Albums, #2 on the UK Rock & Metal Charts, #9 and #17 on Germany and France's Top Album charts, respectively. Order In Decline is available to stream and purchase today via Hopeless Records at http://smarturl.it/OrderInDecline. Chuck peaked at No. 2 on the Canadian Albums Chart and No. 10 on the US Billboard 200.
The band will be joined by Of Mice and Men for a few dates on the upcoming tour and will be making appearances at festivals like Menace in Minneapolis, Aftershock Festival, Louder Than Life Festival and The 27th Annual Halloween Howler. November will see the band kicking off a massive Canadian tour with The Offspring and support from Dinosaur Pile-Up. A full list of upcoming tour dates is below with all tickets and more information available at http://www.sum41.com/.
Upcoming Sum 41 North American Tour Dates
September 29 - Louisville, KY - Louder Than Life Festival
October 1 - McKees Rocks, PA - Roxian Theatre*
October 2 - Detroit, MI - The Fillmore*
October 4 - Kansas City, MO - Arvest Bank Theatre at The Midland
October 5 - Minneapolis, MN - Menace in Minneapolis at Skyway Theatre^
October 6 - Chicago, IL - The Riviera Theatre
October 8 - Denver, CO - Ogden Theatre
October 9 - Salt Lake City, UT - The Complex
October 11 - Sacramento, CA - Aftershock Festival
October 12 - Chico, CA - Senator Theatre
October 13 - Seattle, WA - Showbox SODO
October 16 - Las Vegas, NV - House of Blues
October 17 - Los Angeles, CA - Palladium
October 18 - San Diego, CA - Soma
October 20 - Tempe, AZ - The Marquee
October 22 - Dallas, TX - Gas Monkey Live
October 23 - Houston, TX - Revention Music Center
October 24 - Memphis, TN - Soundstage at Graceland
October 26 - Raleigh, NC - The Ritz
October 27 - Silver Spring, MD - The Fillmore Silver Spring
October 28 - New York, NY - Hammerstein Ballroom
October 29 - Philadelphia, PA - The Fillmore
October 31 - Worcester, MA - The Palladium
November 2 - Edmonton, Canada - The 27th Annual Halloween Howler.#
* - Of Mice & Men replaces The Amity Affliction
# - Support from The Lazys and Kane Incognito
^ - Festival with The Amity Affliction, Bowling For Soup, Less Than Jake and more
December 14 - Cincinnati, OH - Bogarts
December 15 - Belvidere, IL - The Apollo Theatre AC
December 17 - Nashville, TN - Cowan
December 18 - Orlando, FL - House Of Blues
December 20 - Fort Wayne, IN - The Clyde
December 21 - Grand Rapids, MI - Monroe Live
Sum 41 with The Offspring and Dinosaur Pile-Up
November 12 - Halifax, Canada - Scotiabank Centre
November 13 - Moncton, Canada - Avenir Centre
November 15 - St Catharines, Canada - Meridian Centre
November 16 - Sudbury, Canada - Sudbury Arena
November 17 - Laval, QC - Place Bell
November 19 - Sault Ste Marie, ON - GFL Memorial Gardens
November 21 - Winnipeg, MB - Bell MTS Place
November 22 - Moose Jaw, SK - Mosaic Place
November 23 - Estevan, SK - Affinity place
November 25 - Medicine Hat, AB - Canalta Centre
November 26 - Calgary, AB - The Palace Theatre
November 27 - Cranbrook, BC - Western Financial Place
November 29 - Penticton, BC - South Okanagan Events Centre
November 30 - Abbotsford, BC - Abbotsford Centre
December 02 - Kamloops, BC - Sandman Centre