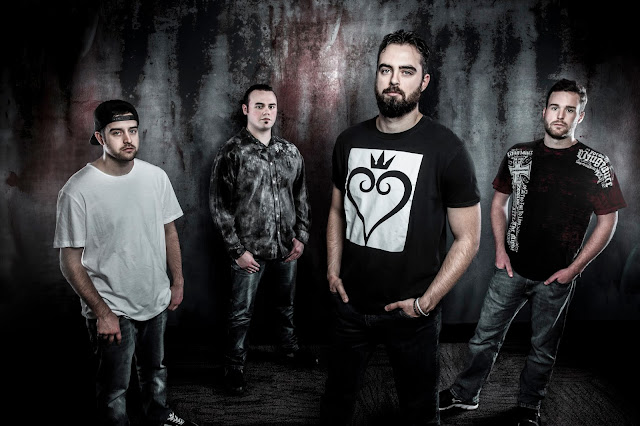 How did the development of Strength Betrayed come about?
Jacob Hair - Thomas, Taylor and I had been in a band previous to Strength Betrayed. So we already knew each other very well. One day after school, Taylor came up to me and asked if I wanted to jam with him and Thomas. It was an immediate yes! So we went to our local church and had a jam session. After jamming to a few songs, Thomas said he had a riff. After playing the riff and putting a few more ideas together, we pretty much wrote Playing With Hearts in our first jam session. It was immediate chemistry. When we all left the church we immediately talked about forming a band. Taylor came up with the name Strength Betrayed. It was actually the name we used in a band Taylor and I was in previously. A few months after having our first jam session we were looking for a bass player. Taylor, Seth and I graduated high school together and we played for chapel services at school. So we knew each other very well. The moment Seth sent in his audition, it was a no brainer. He was the guy. One month later we played our first show together.
Was metal rock the first genre you all had chosen to create?
Jacob Hair - Absolutely! We’re all metalheads. We knew going into it that Strength Betrayed would be a hard rock/ metal band. It’s our favorite genre. Now don’t get me wrong, we all love different styles of music but hard rock and heavy metal are our favorite.

Who has been some of your main influences in the realm of metal and hard rock?
Jacob Hair - My main influences have been Eddie Van Halen, Randy Rhoads, Mark Tremonti, Steve Vai and a number of other guitarists. Eddie Van Halen has been my favorite guitarist ever since I was 10. It all started when my Dad bought Van Halen Live Without a Net and it changed my life. I never knew a guitar could sound like that. The way he plays is absolutely incredible. And the man is a genius. From his music to his instruments, he’s just always been a hero of mine.
Randy Rhoads is my Dads favorite guitarist. So I grew up around a lot of Randy’s solos. When I heard Mr Crowley for the first time I was star-struck. His way of mixing classical music with metal has influenced my playstyle heavily.
Mark Tremonti is a huge influence on me. I grew up listening to Creed so I knew who Mark was at an early age, but when I heard Blackbird by Alter Bridge for the first time, I thought it was one of the coolest solos I’d ever heard. When I first started learning guitar, I tried to learn a lot of riffs off the Blackbird album. I just love the way he plays and the gear he uses. Also, his presence on stage is a killer! I actually got to meet Mark at the Carolina Rebellion in 2015. I and our bass player Seth got to get his autograph and we actually got to speak with him for a brief moment.
The first time I heard Steve Vai was actually on the movie Crossroads. As a kid, that was one of the coolest things I’d ever heard. Then when I found out he played all of it I was mesmerized. Soon after watching the movie I found my Dad's old David Lee Roth Eat ‘Em And Smile cassette. He’s one of the most creative guitarists out there and an awesome shredder lol.  I think that’s the main reason I consider him a huge influence. Never be afraid to experiment.
Who did you work with on this single/video "War Torn"?
Jacob Hair - We teamed up with KindPunk for our music video for War-Torn. We loved their creativity on other videos and thought they would be awesome to work with. It was an awesome experience getting to work with them. I would absolutely recommend them to anyone.
Please discuss the background surrounding this single.
Jacob Hair - Our bassist Seth came up with the pounding riff at the beginning. Thomas had some lyrics together and we immediately began the writing process. After a few practices, we had the blueprints for War-Torn. We worked extremely hard to get this song right. We had many different riffs we were experimenting with and wound up using most of them in the song.
How does the single fit into the rest of the EP coming?
Jacob Hair - I think it meshes really well with the rest of our songs on the album. It’s our style in a nutshell. It’s a very pounding song. The majority of our songs have pounding riffs. It's a great overall representation of our sound in general.
What is next?


Jacob Hair - We will be releasing our first official album “War Torn” on September 28th and our album release party is set for October 5th at Clayton Beverage in Clayton NC. We are extremely excited to get this album out and share it with the fans! It’s been a long time coming and it’s finally here!