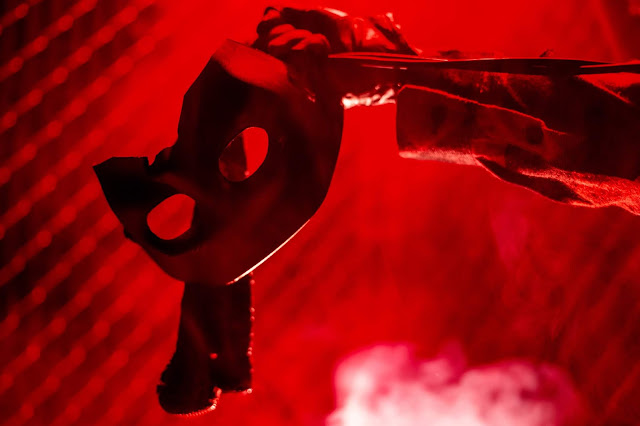 Ray Carlson: Please introduce each member of the band.
V: You can call me V.  I am the leader of this violent syndicate but there are other conspirators who join me from time to time. On our new EP you’ll hear Aaron Nordstrom (Gemini Syndrome), K.A.Z. (VAMPS) and Andy James (Guitarist) all take part in the destruction.

Ray Carlson: Talk about your current project, Its conception. How it evolved. The storyline behind its
development or any anecdotes that may have occurred during the writing/recording process?
V: While Violent Idols just launched earlier this year, its conception has been on my mind a lot longer.  I started writing material that didn’t fit with anything I’ve released before last year; and while I had no home for this music, the ideas kept coming.  Sometimes VIOLENT IDOLS feels like a virus that has overtaken me.  I didn’t choose VI. VI created me.

Ray Carlson: Were there any conflicts during the recording process? If so, how did you all overcome
them, if not what do you think is the formula that keeps everyone chill?
V: The only conflicts so far are always with “the suits”.  Some people call them “the gatekeepers”.  These are the people that want to tell you where you can and can’t sell music, where you can and can’t perform and things like that.  Some sites like Instagram have blocked us from selling merchandise on their platform simply because our band has Violent in the name.  We’ve heard they ban the word “Freedom” too.  Ironic.  At the end of the day you have to persevere and stick to your guns.  We are not going to let an App change who we are.  We are not going to let an algorithm mute our voice.

Ray Carlson: Is there a particular part you enjoy more than another in the process of a project?
V:  Releasing a song is the most exciting part.  The waiting.  The anxiety.  The panic.  You run through every worst-case scenario in your head.  It’s chaotic and confrontational. It’s like having that dream where you’re in front of the whole school naked.  Sheer terror, but you never forget it.

Ray Carlson: In this fast-paced digital world of music how does a band stand out in the river of Spotify and YouTube nowadays?
V: Bands need to stop clutching onto the past models so tightly.  Stop waiting around for somebody to sign you and get the fuck out there and make some tunes.  Say something.  Be sincere.  I believe people are more desperate for substance than they want to admit.  Find some and bring it to the people.  A good song, a catchy band name, a sharp music video…none of it means anything anymore if it’s not SAYING something.

Ray Carlson: The music scene is different from city to city. What is it like at home? Is there strong local support?
V: The Las Vegas music scene has always been a bit disjointed with it’s music scene but it does feel like metal and hard rock have been on an upswing here in recent years.  Live music venues with stages that bands can actually play are always under threat, yet fan turnouts are strong.

Ray Carlson: Do each of you have a favorite band Tshirt you like to wear while performing?
V: Would probably wear a wrestling t-shirt before anything.  Probably one of Jon Moxley’s.  We just did his theme song in AEW and he’s been delivering some of the most violent matches today.  If you’ve ever said wrestling is fake watch his latest match against Kenny Omega at AEW Full Gear.  That shit was brutal.

Ray Carlson: Looking towards the short and long term of where you might be currently- where do you see yourself as an artist/band in 2019/2020 and beyond?
V: We have our first EP coming out in January.  We’re releasing one song every couple of weeks until then.  We’ve already begun work on the second EP.  The momentum of this project has been insane.  For the first time, I can’t even say where VIOLENT IDOLS will be in a year.  It’s a runaway train and either we reach the next stop on the line or we burn up in flames trying to get there.  I love the unpredictability of the ride.  The future is dangerous and that’s exciting to us.

Ray Carlson: A final piece of advice you wish someone had given you ten years ago?
V: Stop trying to please everybody.  In fact, don’t worry about pleasing ANYBODY but you.  Life is fast and brutal so the best you can do is be yourself 100% of the time and give no fucks.  Don’t let the
expectations of others suffocate your true potential.  Stay Violent!