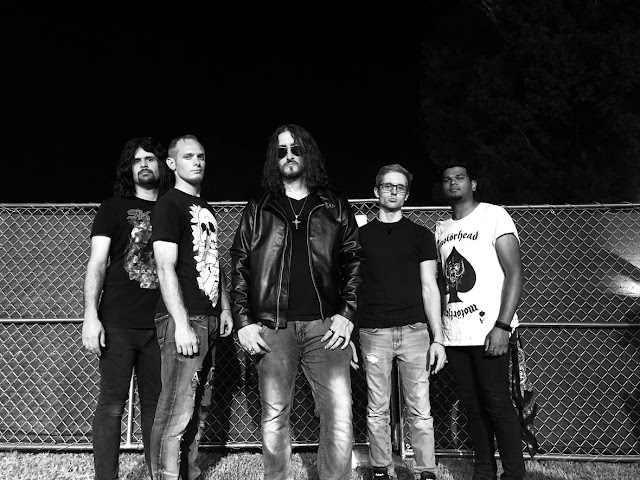 Santa and Hanukkah Harry: So have you been good this year? Now be honest we do have our list.Nathan Paul: Yeah... sure...I’ve been pretty good...

James Branton: I do what I can, but I make no promises.
Christopher Blake: I think I've been decent but I've had my naughty moments
Casey Henderson: No
David Gaines: always an angel

S/HH: You had set out at the first of 2019 to accomplish certain things for your music. Hows that been going?Nathan Paul: Musically, I wanted to be recorded in a song for Ashes to Omens. Mostly because since being in the band I wasn’t on a record with these guys yet; and I wanted to pick up more backing vocal lines. I’ve done both so I did what I wanted to do. But I think that musically I’ll never quite be satisfied cause there’s always room to grow and achieve.
James Branton: I definitely agree with Nathan here. I think at the beginning of the year we set out to play a lot of shows and grow our fan base and get 2 more singles out before the album release and we did that. Now we're getting ready to climb another mountain, but there's always another one to climb.
Christopher Blake: It's been going along. A little slower than I'd hoped, but worth the wait
Casey Henderson: Great
David Gaines: I think we’ve made some great strides this year

S/HH: Enough shop talk. Let's get into the holiday mood. Favorite holiday movie?Nathan Paul: Home Alone and/or Home Alone 2, it’s interchangeable really cause they’re both amazing movies.
James Branton: I like Nathans answers, but if I had to add one, National Lampoons Christmas is a must for me. Also A Christmas Story.
Christopher Blake: Home Alone
Casey Henderson:The Grinch
David Gaines: Elf


S/HH: Do you have a particular food or dish that you like to consume or fix and bring to a gathering? Feel free to share your recipe.Nathan Paul: yeah I do actually, warm, gooey chocolate chip cookies. I make em a pretty special way too! The recipe is a bit hard to follow but I’ll see why I can do: step 1: get a pan and spray it with that spray oil stuff
Step 2: get nestle toll house cookies roll em up, put em in the oven and set the oven to the suggested temperature in the package...
Step 3: there is no step 3
Step 4: eat the cookie.
Christopher Blake: I can't cook. But i can whip up a delicious bowl of cereal
Casey Henderson: Buffalo Chicken Dip
David Gaines: I leave the cooking to the professional (grandma)

S/HH: What are some of your favorite holiday memories?Nathan Paul: Just spending time with my Mom, I don’t have a particular memory, they all kinda mesh but the stand out is the time I spend with my Mom and now her husband too, and all the happiness and laughter, regardless of the gifts we get.
Christopher Blake: Walking in the living room and seeing a new dirtbike for me to ride. Happened 3 different times
David Gaines: Opening a Nintendo GameCube way back in 2002

Nathan Paul: Star Wars. Around Christmas time I love watching the original trilogy a lot.
James Branton: Breakfast with the family, then Star Wars all day.
Christopher Blake:: Eat food and watch holiday movies
David Gaines: Being around friends and family
S/HH: Lets test your knowledge. How many reindeer are there and what are their names?
Nathan Paul: ooh that’s a toughie... I think there are 9 total. Dasher, Prancer, Donner, Cupid, Rudolph... and I can’t remember the rest... I’m sure I misspelled some of those.
James Branton: There's a Vixen in there somewhere.
Christopher Blake: dasher dancer prancer vixen comet cupid donder blitzen and Rudolph. Forgive the spelling errors
Casey Henderson:8 or 9
David Gaines: I think everyone knows the song at this point

S/HH: If you could give the world one gift that would last a lifetime what would you give?Nathan Paul: A healthy environment. Climate change and global warming are a real thing and our planet is dying. More people need to be aware of it and we need to try to fix it.
James Branton: Ditto that.
Christopher Blake: The cure for all terminal illnesses
Casey Henderson: Love & Peace
David Gaines: A sense of purpose

S/HH: Favorite holiday song?
Nathan Paul: Wonderful Christmastime by Paul McCartney, if we’re talking holy, then O Come O Come Emmanuel.
James Branton: White Christmas by Bing Crosby
Christopher Blake: I worked in retail a long time. It's given me a huge distaste for holiday music. But if i had to choose, I'd say the Grinch.
Casey Henderson: This Christmas
David Gaines: God rest ye merry gentlemen
S/HH: Do you have a song by you and your band? Would you please share where we can hear it?
Nathan Paul: Yeah we have a new song that is the first song that I’m on with the band actually it’s called ‘Let the Devil Loose’ and it’s a really fun, badass song. Check it out on our Spotify: Ashes to Omens
David Gaines: www.ashestoomens.com


S/HH: What would you like to say in this final holiday chat to your fans.
Nathan Paul: Merry Christmas everyone, or Happy Holidays if you’re not a Christmas person!
James Branton: Christmas is a time where we can all come together and love one another and really be there for one another. Ashes to Omens would like to thank everyone for their amazing support and wish everyone a Merry Christmas and Happy Holidays.
Christopher Blake: We may not play Christmas music, but that doesn't mean we shouldn't be on your Christmas playlist. Keep rockin

Casey Henderson: Thank you for all of the Love & Support! 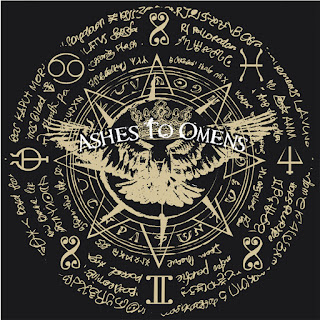