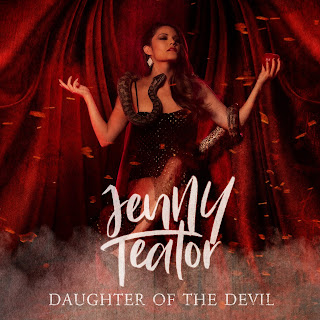 Santa and Hanukkah Harry: So have you been good this year? Now be honest we do have our list.
Jenny Teator: Depends… what is your definition of good? :)

S/HH: You had set out at the first of 2019 to accomplish certain things for your music. How's that been going?
Jenny Teator: So well! I’ve been touring A LOT this year which was one of my goals and to overall travel. I put out another single and music video as well! Onward and upward.

S/HH: Do you have a particular food or dish that you like to consume or fix and bring to a gathering? Feel free to share your recipe.
Jenny Teator: I just made this soup tonight for the second time in a month… when it gets cold it's my go-to! It's an Italian sausage, kale and potato soup and it’s to die for. So comforting and easy to batch up.

S/HH: What are some of your favorite holiday memories?
Jenny Teator: Opening presents with my family as a child, going ice skating with my dad and sister (we grew up doing that), and making homemade Christmas shaped sugar cookies with my mom!

S/HH: Holiday traditions?
Jenny Teator: Not anymore, growing up we would have a few but now that I’m older it has become more about just spending time with family and less about the gifts/traditions. We kinda just do whatever we feel like that year haha usually consists of eating, drinking and laughing.

S/HH: Lets test your knowledge. How many reindeer are there and what are their names?
Jenny Teator: Oh hell, I’m bad at this. Next?

S/HH: Hannukah is also known as the “?”
Jenny Teator: Festival of Lights. I just googled that, full disclosure.

S/HH: Weirdest kiss you ever gave or received under the mistletoe was with who?
Jenny Teator: I honestly don’t even think I’ve received or given one under a mistletoe… yet?

S/HH: If you could give the world one gift that would last a lifetime what would you give?
Jenny Teator: A lifetime of chipotle meals.

S/HH: Do you have a song by you and your band? Would you please share where we can hear it?
Jenny Teator: Yes! "Daughter of the Devil" you can listen to all my songs on Spotify, iTunes, Amazon, Tidal, Google Play.

S/HH: What would you like to say in this final holiday chat to your fans? Jenny Teator: Just a reminder to be nice to everyone, you don’t know what someone could be going through. I hope everyone has a wonderful holiday and end of this year with their family and friends!!