Holiday Fun with After the Calm 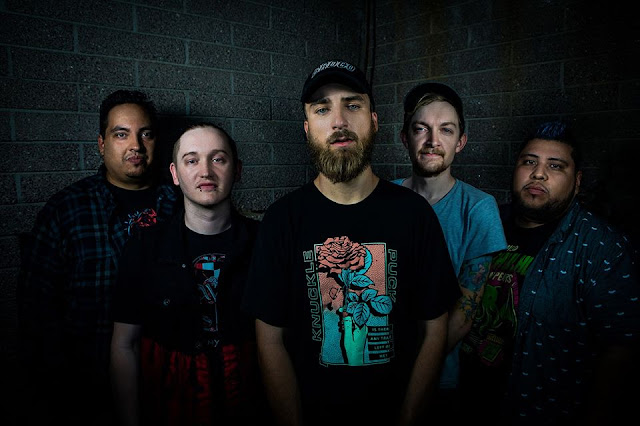 S/HH: You had set out at the first of 2019 to accomplish certain things for your music. How's that been going?

We really think it has been going great. 2019 hosted our first tour and it went really well. We learned a lot about booking but what we learned the most was that our music is something people appreciate. So many new fans from the tour and we plan to do so much more for 2020.

David: I love Green Chile stuffing. My mom has a secret recipe but it is amazing.
Logan: I'm a dessert guy so probably a pie or cobbler.
Jonathan: I love deviled eggs.
Kody: Christmas ham
Henry: Tamales, any and all type since its the only time of year.

David: Christmas is my favorite. We would wake up Christmas Day and open presents and then we would go watch a movie.
Logan: After we open presents on Christmas, we'd always send someone to go get Jack In The Box for everyone to eat breakfast.
Jonathan: My family and I always sit down to watch the first few Home Alone movies around Christmas time.
Kody: Spend the night at one parent’s house on X-mas Eve, head over to the other’s on X-mas morning
Henry: Going from family to family all day and spending time together.


S/HH: Lets test your knowledge. How many reindeer are there and what are their names?

David: Rudolph is all that matters
Logan- Comet and Cupid, I'll let the others get the rest.
Jonathan: Oh man! Maybe like 7? Some names might Blitzen, Comet, Cupid, and Rudolph of course. I can not remember the rest.
Kody: 9, counting Rudolph? (had to sing it first) Donner, Vixin, Comet, Cupid is all I can recall.
Henry: I'm cheating and saying 9

David: Eight day jewish Holiday
Logan: I always called it Jewish Christmas as a kid. A lot easier to say.
Jonathan: I’m not sure but I remember it as a Jewish Holiday with all the candles.
Kody: You’re looking for a specific answer and I’m not gonna guess it right
Henry: Festival of lights (awesome song!)

David: Hmmmm…. Not really a sports guy. I would love to try to snowboard or even surf.
Logan: I despise the cold weather. So I'm most likely inside next to the heater.
Jonathan: I’ve gone skiing and snowboarding but living in Arizona we do not get the chance to do much snow sports. I love watching the X games though.
Kody: Winter Olympics are cool, though I don’t find myself actively searching for sports.
Henry: Always wanted to get into snowboarding but we are in Phoenix and show does not exist.

David: I don’t think I’ve ever had the privilege to experience a moment like that.
Logan: Same here, never found myself in that situation.
Jonathan: I can’t remember if I have had a kiss under the mistletoe. I know what I’m gonna do this Christmas now.
Kody: As much of a tradition as it sounds, I don’t know anyone who’s kissed under the mistletoe.
Henry: Never have, never will.

S/HH: Eggnog?
David: I dig eggnog for sure. I know some people don’t care for it but I do.
Logan: Never tried it.
Jonathan: I love it! Especially with some whiskey or some sort of spirit.
Kody: Wouldn’t decline, but not my first choice off the menu
Henry: Haven't had the chance, dont think its for me.

David: A song that touches someone. As cliche as it sounds, that’s all I want my music to be able to do.
Logan: Capabilities and Access. Some kids in other countries have never heard any other music or seen movies or read books. I wanna spread the availability of art.
Jonathan: Man that is a hard one. I’m gonna go with the beauty pageant answer and say world peace.
Kody: Knowledge
Henry: To live long and prosper

We have a new single coming and the release is looking like January 2020. It’s a song that hits hard but is slower than our usual music. We played it live at our Pub Rock show with Assuming We Survive and it was received well.

We hope each and every single one of our fans have a great holiday. If that doesn’t happen we encourage you to reach out to us. Not every year goes as planned and sometimes they can be such a downer. If that happens, reach out and we can at least lend an open ear.