Holiday Fun with Jake Ward of Watch Me Breathe! 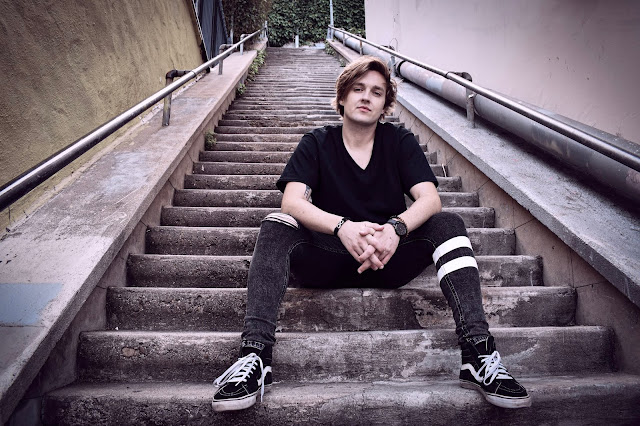 Santa and Hanukkah Harry: So have you been good this year? Now be honest we do have our list.

Jake Aaron Ward: I should hope not too good…

S/HH: You had set out at the first of 2019 to accomplish certain things for your music. How's that been going?

Jake Aaron Ward: Man it’s crazy, looking back on the start of the year, so much has changed. We’ve started working with a fabulous PR company (TAG Publicity) and partnered with a label manager (Dennis Sanders/The Label Group), we switched distributors, we went from having like 100 Spotify followers to well over 4,000...it’s just crazy exciting. This was a good year, for sure. I can only hope next year is even better!

Jake Aaron Ward: “It’s a Wonderful Life” is objectively not only the best holiday movie, but in fact the best movie ever and my heart aches for the tragic confusion among those who disagree. I watch it every year!

Jake Aaron Ward: “A” particular food? Like ONE?! Haha. There are so many! The holiday season is unbelievably dangerous for the waistline. I like peppermint bark, hot cocoa, gingerbread cookies, pumpkin pie, eggnog...not sure I can think of anything healthy, but the list of sweets goes on pretty much forever. My life philosophy dictates that I must eat these things at least once each year, just to avoid robbing myself of experience, which is a capital offense.

Jake Aaron Ward: I’d say all of my favorite holiday memories are from being a kid. My family celebrates Christmas, and I can still remember that sort of golden era from age 5 to age 10 where all through December I was just in disbelief that it was really happening, and that Christmas was really coming. And it would get closer and closer and I’d get more and more excited, and then it would be Christmas Eve and I’d be like “I literally can’t believe it is Christmas Eve, oh boy oh boy oh boy,” and then I’d wake up at 4:37 AM and barge into my parents room and be like “IT’S CHRISTMAS!!!!” And knowing that there were untold treasures glimmering and waiting anxiously for me just down the stairs was the most indescribably magical feeling I could ever recall having. I still love Christmas, but now I just love it for the excuse to spend time with my family. All of that childhood wonder has soured into a distrust of and aversion to garish commerciality and this weird deity-for-children that I think was largely invented by Coca Cola. Becoming an adult SUCKS! But now I have to try to fill that hole somehow and those efforts are, after all, why we’re here talking to each other I’d think.

Jake Aaron Ward: Our family is fairly traditional in this regard. We get a tree and we decorate it while listening to James Taylor and Sinatra. Our extended family all get together on Christmas Eve in the East Bay. We open gifts in the morning, watch the NBA during the day, and have dinner with our neighbors. I guess the only thing we don’t do is go to church. There is another tradition I have with some friends of mine from high school where, after Christmas has passed and people are leaving their trees out on the curb, we take them and stick them in basketball hoops. It’s really terrible. But it’s so fun.

S/HH: let's test your knowledge. How many reindeer are there and what are their names?

Jake Aaron Ward: Isn’t it the “Festival of Lights?” I swear I’m not cheating! I do think that’s right though...I hope.

Jake Aaron Ward: One of the great failures of my life so far has been the squandering of what I’ve been told is a God-given gift for skiing. Carl and I both had it. We took skiing lessons as kids and just started immediately bombing down slopes and going over baby-size jumps without falling (at least very often). The instructor actually said we were the best first-time skii-ers he had ever taught (which I have no shame in bragging about)! But living in central California, there’s no snow anywhere unless you drive for several hours to Tahoe, so to this day, I’ve only been skiing a handful of times, although it’s always been an absolute blast.

Jake Aaron Ward: You know, I’ve actually never done that. At least, not that I can recall.

Jake Aaron Ward: Mmm, yes, my adoration for this substance seems a horribly plausible explanation for my inability to answer the previous question…

Jake Aaron Ward: A software update for brains that included much better critical analysis and a hefty reduction of the capacity for otherization. Either that or a Nutella fountain in every home. Tough choice, really.

Jake Aaron Ward: It’s changed periodically as I’ve gotten older. I actually think The Christmas Song is my favorite. “Chestnuuuuts roasting on a open fire...Jack Froooost nipping at your nose...yuletide carols being sung by a chooooiiiir…” That’s a pretty wonderful melody, honestly!

Jake Aaron Ward: Well, not a holiday song. But we do have a new single called "Garden Of Eden" out on Dec 6th!

Jake Aaron Ward: As always, if you’ve listened to our music this year and supported what we’re doing, then you are part of a growing group that makes all of this 101% worth doing. We can’t thank you enough! Also, I’d like to say that, while I’m not big on New Year’s resolutions, I fully endorse the resolution that all of us young people in the US need to go out and vote next year. It’s so freaking easy to do and it’s probably the most impactful thing most of us will ever do. Okay, that’s all. Happy Holidays!