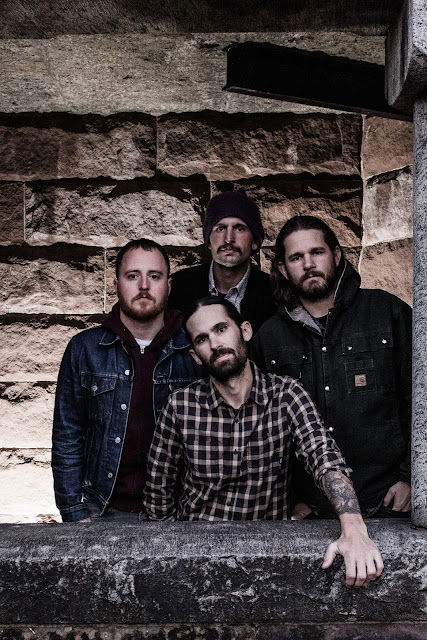 Santa and Hanukkah Harry: So have you been good this year? (Now be honest we do have our list)
Bryan Nash- Behaved according to my definition of the word.
Jim Bobbi- Never. And I still get gifts!
Joe Nash- I’ve been good and deserve everything I got coming to me.
S/HH: You had set out at the first of 2019 to accomplish certain things for your music. How's that been going?
Jim Bobbi- It was a rough start, but after getting ‘Incredible Villains’ to some specific people.. we have started to accomplish a lot.. mainly spreading the reach of the album. Thanks to Heavy Metal Records, Extreme Management Group and Tag Publicity.. we have taken particular steps to begin 2020 the right way. Oh and we played a sold out show at Starland Ballroom which was fucking awesome!
Joe Nash- we have played a lot of great shows, more so this year than any other.  We really have seen the results of our efforts.
S/HH: Enough shop talk. Let's get into the holiday mood. Favorite holiday movie?
Bryan Nash- Die Hard
Jim Bobbi- NOT Diehard. And not because John McClane isn’t the biggest badass on Earth, but because I strongly feel that ‘holiday movies’ are movies you only feel the need to break out during that particular season.  Therefore.. Christmas Vacation is the go to for me. And Diehard can be watched any day, 365.
Joe Nash- Christmas Vacation, A Christmas Story, and Gremlins.  I am aware I chose three, but that’s showbiz baby.
S/HH: Do you have a particular food or dish that you like to consume or fix and bring to a gathering? Feel free to share your recipe.
Bryan Nash- There’s a beautiful dish that’s perfect for the holiday season that’s perfect for child and adult alike.  Get a pen. Ok. Cool Ranch Doritos.
Jim Bobbi- Hot pockets!
Joe Nash- I love sweet potato anything. I’d eat sweet potato dogshit if someone made it.
S/HH: What are some of your favorite holiday memories?
Jim Bobbi- The greatest gift I had ever received for Christmas in the history of all Christmases, was the ‘He Man Sword’ from Masters of the Universe. The saddest day of my life was when my brothers/bands mates broke said sword.
Joe Nash- Getting a Star Trek The Next Generation journal.  I never wrote it in, but I love it. Also finding my Nintendo 64 in my parents closet a month before Christmas.  I would stare at it everyday.
S/HH: Holiday traditions?
Jim Bobbi- My family has one tradition on Christmas Eve and we gather around to read Twas the Night before Christmas. Every year, my parents proclaim that the original first pressing of the book that we own would have been valuable if it hadn’t been for young Joe needing to scribble in his own artwork on the pages.  Then we read an excerpt from an edition of The Sun dated 1897 titled ‘Yes, Virginia there is a Santa Clause’.
S/HH: Let's test your knowledge. How many reindeer are there and what are their names?
Bryan Nash- Rudolph is the only one worth a damn let’s be serious. The others are for show. Rudolph can get the job done solo.
Jim Bobbi- I’m doing this without Googling! I think there are 9 including Rudolph- Dasher, Dancer, Prancer, Comet, Vixen, Dondner, Cupid, Blitzen. I also think Rudolph was added on later.
S/HH: Hanukkah is also known as the "?"
Jim Bobbi- Festival of Lights
Joe Nash-Jewish Christmas
S/HH: Are you into snow sports during the winter months or if you are down under summer sports during the winter months? What are they?
Bryan Nash- Sports? Hmm not a question for me. Someone else take it away!
Jim Bobbi- I snowboard and make snowmen. And I write my name is the snow with….
Joe Nash- The last time I snowboarded... rolled down the hill.
S/HH: Weirdest kiss you ever gave or received under the mistletoe was with who?
Bryan Nash- I landed under the mistletoe with my friend Chris back in high school. I went with it. Didn’t hate it.
Jim Bobbi- I have no clue, but I am pretty sure mistletoe could be deadly if you eat it.
S/HH: Eggnog?
Bryan Nash- As long as it’s done right with the booze and such.
Jim Bobbi- I am not Rocky Balboa and I don’t drink eggs.
Joe Nash- Bleh
S/HH: If you could give the world one gift that would last a lifetime what would you give?
Bryan Nash- I would subtract singing competition shows. Your welcome, world. You are released. And I am a hypocrite. I went to try out for one once. I did not get very far, but so maybe, I’m just disgruntled. Watching them is mind-numbing. Go out and find live music instead.
Jim Bobbi- Yours truly.
S/HH: Favorite holiday song?
Bryan Nash- The soundtrack from Die Hard.
Jim Bobbi- The Christmas Shoes by Newsong
Joe Nash- Washington Washington
S/HH: Do you have a song by you and your band? Would you please share where we can hear it?
Jim Bobbi- Get all our goodies from Nashrocks.com
S/HH: What would you like to say in this final holiday chat to your fans?
Bryan Nash- Be excellent to each other.
Jim Bobbi- Happy Christmas to all and to all a goodnight!


Joe Nash- Remember it can all end tomorrow.  Good night.