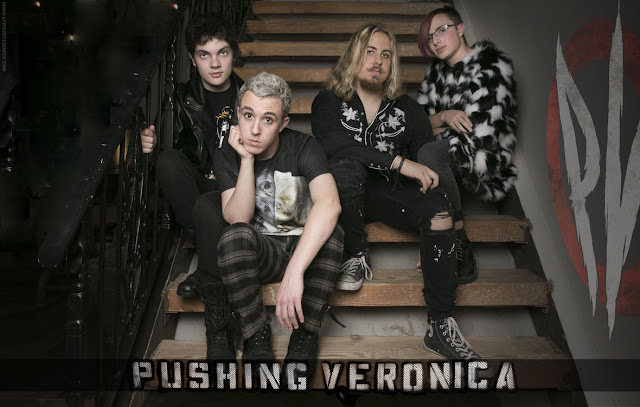 Santa and Hanukkah Harry: So have you been good this year? Now be honest we do have our list.
Julien Silvas: No I’ve been sexy.
Noah Rozansky: Have you heard our new single “Bullshit”? I think we’ve earned the “Naughtiest Boys of the Year Award”!

S/HH: You had set out at the first of 2019 to accomplish certain things for your music. How's that been going?
Oliver Litner: Things are going swimmingly. We’re living with each other for a month in an RV, touring the US. This is the dream!
Noah Rozansky: Get me out of this RV, Oli’s stinky.

S/HH: Do you have a particular food or dish that you like to consume or fix and bring to a gathering? Feel free to share your recipe.
Julien Silvas: Dumplins!!!!!
Noah Rozansky: If there’s a bowl of mashed potatoes, you’d best bet that there’s gonna be nothing left by the time I’m through.

S/HH: What are some of your favorite holiday memories?
Julien Silvas: I love taking the stockings and putting them on my foots.

S/HH: Lets test your knowledge. How many reindeer are there and what are their names?
Noah Rozansky: As the Jewishest member of the band, I can’t exactly be sure but I think there are 9 reindeer: Rudolf (obviously), Blitzen, Dasher, Prancer, Dancer, Chandler, Bouncer, Fencer (shoutout to the boyz), and Bambi.

S/HH: Hannukah is also known as the "?"
Oliver Litner: FESTIVAL OF LIGHTS HOMIE DON’T TEST US.

S/HH: Weirdest kiss you ever gave or received under the mistletoe was with who?
Oliver Litner: Noah’s dad.
Julien Silvas: Noah’s dad.
Noah Rozansky: Noah’s dad. He just planted himself there all night.

S/HH: If you could give the world one gift that would last a lifetime what would you give?
Oliver Litner: An ad wall on every social media platform so nobody uses them anymore.
Julien Silvas: A warm sticky hug.

S/HH: Favorite holiday song?
Julien Silvas: All of them at the same time.
Brady Ward: Macklemore.


S/HH: Do you have a song out currently? Would you please share where we can hear it?
Pushing Veronica: Our newest single is “Bullshit” and it has an accompanying music video! You can consume it every single place you look, but make sure you blast it in your office building.

S/HH: What would you like to say in this final holiday chat with your fans?
Brady Ward: Make sure you eat your spinach and stay warm.