Holiday Fun with Until the Storm 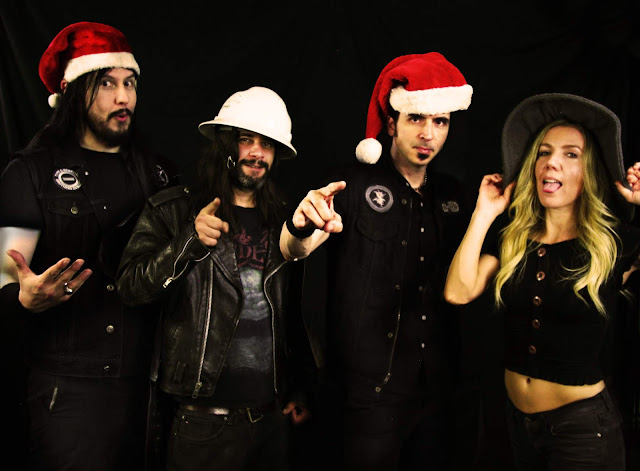 Santa and Hanukkah Harry: So have you been good this year? Now be honest we do have our list.
Eric Lamb: No.
Sado Rabaudi: The goodest.
Greg Carrillo: I’ve been neither good nor bad, but you wouldn’t know it by the responses.
S/HH: You had set out at the first of 2019 to accomplish certain things for your music. How's that been going?
Sado Rabaudi: It’s been pretty productive actually. We started this new project, “Until the Storm” around July of this year, and so far wrote, recorded and made a video for our first song. Upon release, the reception has been great so far.
Eric Lamb: Pretty terrible, got 1 Until The Storm song recorded (although I'm new to the band), 1 Hellfunk song recorded, no Skald songs recorded, and 1 Thrash Commander song recorded. Yeah, I didn't do shit, but you know what? I'm just happy to be here.

Greg Carrillo: 2019 was actually quite busy in music compared to the previous year. I wouldn’t say we are satisfied, and I expect 2020 to be full steam ahead.
S/HH: Enough shop talk. Let's get into the holiday mood. Favorite holiday movie?
Eric Lamb: Fargo
Sado Rabaudi: Thankskilling
S/HH: Do you have a particular food or dish that you like to consume or fix and bring to a gathering? Feel free to share your recipe.
Eric Lamb: You take clam chowder, put some vodka and 5-hour energy into it, and BAM! You got Slam Chowder. Everybody hates it.
Sado Rabaudi: Store-bought potato salad. Recipe: Open the lid and serve.
S/HH: What are some of your favorite holiday memories?
Eric Lamb: Spending quality time with you ;)
S/HH: Holiday traditions?
Eric Lamb: I watch Mr. Hankeys Xmas special while crying myself to sleep every Xmas
S/HH: Let's test your knowledge. How many reindeer are there and what are their names?
Eric Lamb: Listen, kids, the only pokemon you need is Nidoking. He can destroy anything I don't know why you guys even bother catching other pokemon.

S/HH: Hannukah is also known as the "?"
Eric Lamb: IDK I'll take any reason to eat a lot of food and get hammered with the people that are close to my heart. Especially you reading this.. What's up cutie? ;)

S/HH: Are you into snow sports during the winter months or if you are down under summer sports during the winter months? What are they?
Eric Lamb: I have no idea, what are sports? Is that the thing that's always on tv at bars with the touchdown basket points? I like it when they fight and the zebra man blows his whistle but nobody cares hahaha fuck that guy.
S/HH: Weirdest kiss you ever gave or received under the mistletoe was with who?
Eric Lamb: No but I did get road head once, it was aite.
S/HH: Eggnog?
Eric Lamb: Nah I'm good thanks though.
Greg Carrillo: Greggnog
S/HH: If you could give the world one gift that would last a lifetime what would you give?
Eric Lamb: I just want to get a video of me seductively licking the top of Jeff Bezoses head and have it go viral, that would be my gift to the world.
Sado Rabaudi: A time-traveling flying cat that can grant wishes or a can of really good soup.
S/HH: Favorite holiday song?
Eric Lamb: Candlemass – Black Stone Wielder
Sado Rabaudi: This

S/HH: Do you have a song by you and your band? Would you please share where we can hear it?
Eric Lamb: Yes.
Sado Rabaudi:

S/HH: What would you like to say in this final holiday chat to your fans?
Eric Lamb: Bring back 90s basketball culture. Slam bam thank you, mam.


Sado Rabaudi: The universe was created 10 minutes ago and all your memories were implanted. Why are pugs so awesome?