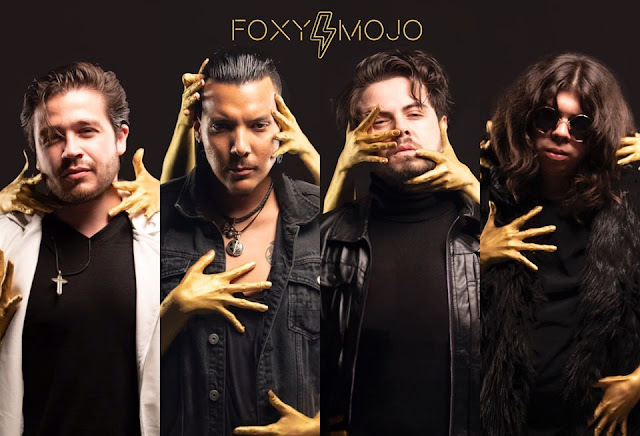 Alex Rodriguez: For indie rock or indie, in general, it used to be an uphill battle, dominated by a hardcore & heavier scene back in the day, bands like us were the odd men out, the weird kids scoffed at because our guitars only had 6 strings and not 8, it was quite the warzone up until 2013 when they killed off their own scene with the typical infighting. That opened up a door that let different artists flourish, especially within the indie & punk scene, suddenly the bands and music we like became “cool”. It became a great place to use as a stomping ground since we’ve made our return, our drummer is the youngin’ of the band and is constantly out among the scene and people shower him with genuine love and congratulations ever since we dropped our first single from the upcoming album.

Ray Carlson: Do each of you have a favorite band Tshirt you like to wear while performing?

Tristan Torres: I do! The other guys don’t normally wear band shirts on stage, they dress up looking nice in that rock n’ roll sense. My favorite shirt for me so far has been my Led Zeppelin 3 album shirt from the 70’s.

Ray Carlson: Talk about your current project, Its conception. How it evolved. The storyline behind its development or any anecdotes that may have occurred during the writing/recording process?

Tristan London: Disaster struck us back in 2017 and we really took a punch to the gut after a lot of momentum we had going that just took the wind out of our sails. I just started writing and getting better at recording during that time, venting frustrations that evolved me lyrically, so I suppose that served a purpose. It honestly wasn’t until we’d written and recorded the single we just released that something in the band sparked again, so the band voted to put me behind the recording process as producer on it and from there it felt like we had a sense of direction again, it was a “Revival” for us and that somehow became the mission statement behind the album. It may not be said in every lyric, but overall we realized that we were creating something that will remind people that indie rock can still have its punch and place in the world just like it did when we were kids in the mid 2000’s golden age of indie rock. We’re not looking to reinvent the wheel with this 15 track album, just put the air back in the tires.

Ray Carlson: Were there any conflicts during the recording process? If so, how did you all overcome them, if not what do you think is the formula that keeps everyone chill?

Eric London: I think we’re lucky or spoiled depending on how you look at it, that our recording process begins and ends with my brother, Tristian London, he’s an absolute maniac. He just churns out song after song from the studio. We all get messages maybe 5 times a day of something he’s working on and that’s our chance to come in and add our flair to it. He’s a great composer, I think he’s got an ear for that commercial sense while staying true to our style and retaining that edge. I’m about good for a riff, and I’ll record it with him, leave, and by the end of the night I’ll get a whole song sent back to me drums, bass and all because he’ll just obsess over it, over the tiniest of things, I don’t think the guy’s listened to anything but our album since we started working on it.

Ray Carlson: Is there a particular part you enjoy more than another in the process of a project?

Tristian London: I think it’s just making something new, watching it grow, I don’t mind taking on a lot of the heavy lifting for the band because of that, it’s like an addiction, as soon as we finish a song, I’m over it, I want another, every song opens up a new realm of possibilities, is this one a single? Or is it this one? We have a music video about to be released and that’s great, but I’m already deep into the planning stages for the next 2 or 3 or 6 videos and singles, the look, the concepts, the sound, then on to the next one.

Alex Rodriguez: That’s the trick isn’t it? We’ve watched a handful of artists try to fit into what’s popular and just bomb, I think the public can feel that that manufactured ingenuine motive towards music. As for us, we let our roots unapologetically shine, we’re an indie rock band that can play as shambolic as the libertines or as aggressive as the stooges, we’re not out here trying to be cute or ironic, like we don’t take it seriously, that seems to be what indie rock is about these days because it’s safe. We’re not afraid to be aggressive or to be beautiful because there’s always an energy around each song that I think can help listeners get into other styles on the album they may not be open to originally, and because we’re not stuck in one sort of “box” of “ok this is the style of band we’re strictly gonna be” and indie rock hasn’t seen that since the mid 2000’s and we genuinely think they miss that.

Tristan Torres: I’m astounded at the power and spectrum of sound on this new record, every time we show a little of it to anyone people just give this wide-eyed reaction like they know there’s something there, and if that’s any indicator of what’s to come I see 2020 really is a break out year for us. We’d like to go back to SXSW again and kick off a tour from there, and hopefully have shopped around the album and found it a home at somewhere like our heroes at Rough Trade by then. Our second-largest fan base seems to be the UK so here’s hoping we sail across the pond. I really think we’re standing on the edge of what may be the next best 10 years of our lives if we pull this off.
Ray Carlson: A final piece of advice you wish someone had given you ten years ago?

Eric London: That no matter what you do, or how nice and down to earth you maybe, some people will ultimately never like you when you’re trying to establish yourself. Whether that’s from jealousy, or something as shallow as how you look or misconstruing confidence on stage for arrogance, we’ve been on the receiving end of things like that as we’ve grown quickly. It’s baffling, but once we’d learned to just say “screw it” and stayed focused on the bigger picture, you start to see how small all that stuff is as you grow and people that actually do matter show a truly genuine love for you, and those kinda people make it all worth it.

People can stream & check out our music at: https://www.foxymojoofficial.com/stream-watch-follow