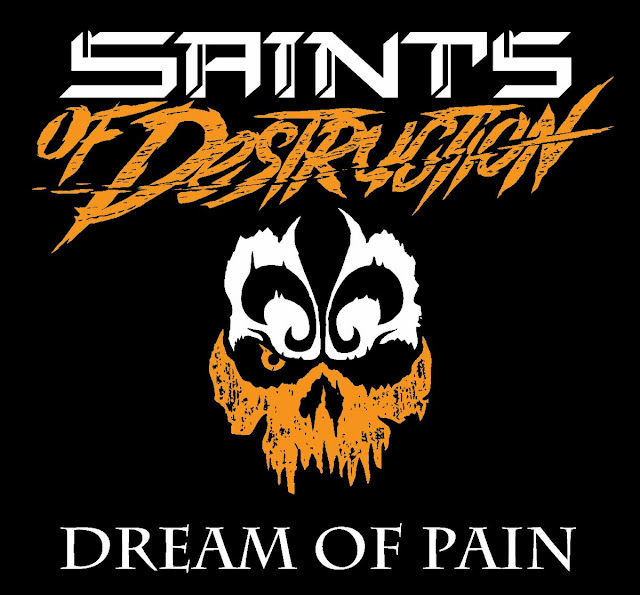 Who are Saints of Destruction?

We’re four friends who are tired of both the musical and political status quo, so we channel a lot of that energy into making music and spreading our message.

“It all came from a lyric that Marc wrote our first day back together as a band, ‘All hail the Saints of Destruction.’ We all really liked the juxtaposition of contrasting elements and we felt the more aggressive tone of the name matched our sound.

The single "Dream of Pain" certainly has a message. Talk to us about it.

The overall message of the song is a warning against becoming complacent, unquestioning, and intellectually lazy, particularly in matters of politics. Basically, don’t allow yourself to be a mindless zombie. Question everything, and form your own opinions!”

Who wrote "Dream of Pain", who does most of the writing for the band?

“It was a combined effort. On our first day back together as a band, I started playing a rather unsettling riff in the Lydian Dominant mode, and we all jammed on it to see where it would go. Our creative process is a lot like falling down the stairs and landing on our feet, and we do it all together.”

As fans follow the band, and are ready for more music already- what's coming?

“We’re putting the finishing touches on recording two new songs called All The Lies, and Saints Of Destruction that we will be releasing in the coming months. We also now have brand new merchandise, so be sure place your order at saintsofdestruction.com while supplies last!”

How does Saints of Destruction approach music?

“Very carefully so it doesn’t hear us coming... We pull influence from hard rock and metal predominantly, but we also take cues from a lot of jazz fusion and classical music as well. Our M.O. is, ‘if it sounds good, it is.’ We enjoy experimenting musically so we usually wind up taking a weird idea and running with it.”

How has COVID-19 affected your band?

“At first we felt the same things that everyone else felt: concern, frustration, a little skepticism, etc., but then we saw this quarantine as an opportunity to diversify our platform and bring our message directly to our fans. We believe in taking a difficult situation and turning it around.”

“We’ve learned that ‘you’re never too old to try something new.’ Also, social media is your best friend when people are stuck inside with nothing to do.”

“Simply put, we would like our music to make people think, and to inspire them to make the universe a better place, or at least a more interesting place.”
Saints of Destruction