Interview with Matty Poe of the Band SEASONS 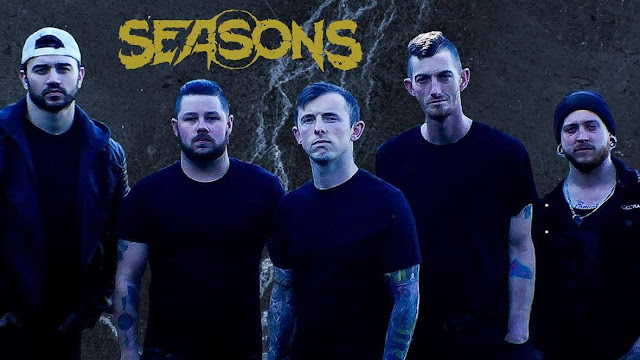 Who is Seasons?
Matty P. - Seasons is a 5 piece metalcore outfit from Richmond, Virginia!


Anything behind the band name? It sounds like it might have some background meaning.
Matty P. - To me personally, not really. When we started the band me and former, founding member Matty G talked and all the past bands we had been a part of had multiple word names and they just seemed too complicated. We wanted something that was short, sweet, and catchy. I think some have tried to interpret it as there are four seasons and it represents different feelings or places but as far as some special meaning to me, I wouldn’t say there’s much more to it than the name that our founding guitarist Matt Gregory picked.


Who wrote "Violence is a Virtue", who does most of the lyrical writing part for the band?
Matty P- The music was written as a collective effort. Kent writes most of the lyrics although in the past we have all contributed lines to songs. ”Violence...” was all Kent and we think he hit the nail on the head with how we were all feeling!


Following the band, and we are ready for more music already- what's coming?
Matty P- We hope to be releasing a stand-alone single by the end of May. We are currently in the studio and working on a full-length debut album! We will be dropping a few more videos throughout the year to support the debut!


How does Seasons approach music?
Matty P.- With an open mind honestly. It’s a collective effort of things we all feel and go through in our day to day lives. We all bring different sounds to the table and whatever that maybe it comes from an honest place.


Congratulations on AEW. How did that all happen?


Matty P. - First off, thank you! That was a super cool experience for us all! It’s one of those things you dream about as a kid and it actually happened to us! All the credit really goes to a fellow Richmond musician Mikey Ruckus. He works for AEW and he saw some success and then he has given it back to the local artist which is past commendable. We can’t thank him enough for thinking of us and reaching out to us giving us a chance to be heard on a much larger scale!

How has COVID-19 affected your band?
Matty P- It’s been both a blessing and a curse for us. We had a summer tour scheduled with Richmond locals Artusha and our friends from Lansing, Michigan in Heart Of Jordan. That whole thing got canceled. On the other side of the coin, we have been writing a ton. We have had more time to engage with our fan base and friends. Our guitarist Mark Spivey and Nick Gober Keller have engaged in online guitar battles and most notably Mark called out Alex Scott from InVisions who replied and had some fun with us so that was really cool! We’ve also seen the loyalty of our fan base and merch sales haven’t slowed down at all which is incredible and past appreciated.


What have you learned from these times that you're using to help create and build your music?
Matty P.- Not to take a single day, show, or opportunity for granted. It’s one thing to have a choice whether to go do something or not but it’s a completely different feeling when that right gets taken away as a whole. I’m excited for the end of this thing because I think there’s going to be an explosion of live entertainment. From theater down to concerts, I think people will be coming out in masses and that’s really awesome to think about.


What would you like your music to do for the universe?


Matty P.-  I would like to think that it’s healing. The things we write about are things we’ve all lived and been through. We want listeners to be able to connect and vibe with that. If you’re sad, happy, angry, whatever we’d like to believe that we have something for almost everything you could feel. My favorite compliment that we have received over and over is “We love the music because it feels so real.” We’d like that pattern to continue and I think that’s the best compliment that any musician could ever receive!

Seasons Violence is a Virtue