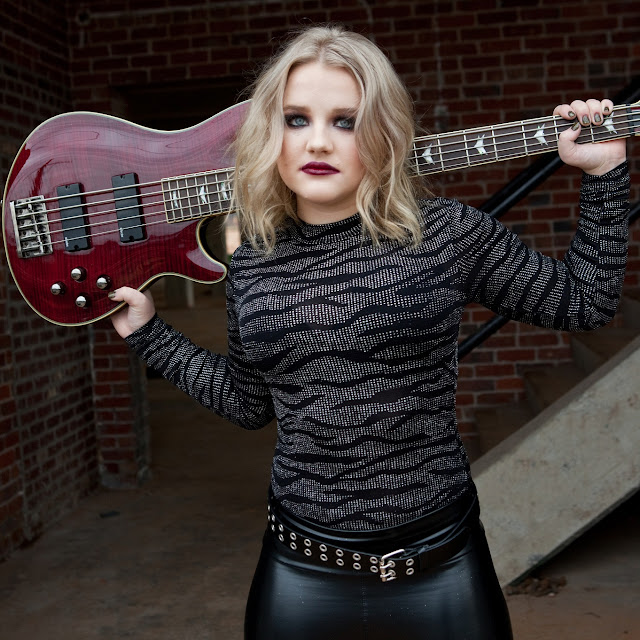 Who is Abby K?
Abby K: Abby K is a 17 year old from Charlotte, North Carolina, with the determination to change the face of the music industry with her passion for rock and roll!


When did the music bug bite and you knew this was your path?
Abby K: It was a very memorable moment for me. I asked my dad to take me to a concert and he picked KISS. I wore the Paul Stanley makeup and I was sitting on my dad’s shoulders at the very back of the lawn. I was completely mesmerized by Gene Simmons and the band and I knew that I had to do that too.

Do you work with anyone on songwriting? How does the process work for you?
Abby K: The songwriting process is different for each and every song. My first single, “It Should Have Been Me,” was a song based on a feeling that I wrote. My second single, “Dirty Love,” was a song about someone else’s experience that I co-wrote with Gary Ramsey and Eddie Z. Now, my third single, “Rock the Rock,” is a song that I wrote about a feeling of fire inside of me.

What is your approach or plan to making your music Abby?
Abby K: I like for my music to appeal to a large audience. I know that if I want to engage a younger audience, I have to include pop factors, such as a catchy melody, and if I want to stay true to who I am, I have to make it rock! I think it is all about making music relatable and singable, all mixed together with a “drive fast down the highway” rock song.

What solutions have you as a musician found to cope with Covid and still make your music?
Abby K: I have had to learn to accept it. It was really hard for me at the beginning of this because I was supposed to go on my first tour this summer and it had to be canceled. I was feeling so many different emotions which really helped me with inspiration for new music and I wrote around 10 different songs in just two weeks. Right now, I’m going to focus on writing music, getting in the studio, and releasing it for the world to hear.


What have you learned from these times that you're using to help create and build your music?
Abby K: I have learned that there really is a way around everything. There is always a way to make it work. During the lockdown, I co-wrote, recorded, and released a song, “Orange Bang” with people I’ve never even met. Victory Vizhanska (Ukraine), AP Tobler (USA), Serge Bo (Ukraine), Mark Godden (New Zealand), Ella May (Canada) and I worked on this project together and it was truly incredible to see everything that is possible with new technology and determination.


As fans follow the band, can you give us insight as to what might be next?
Abby K: I have a live stream concert this Sunday, July 26th. You can find all of the information on my social media @abbykonbass and my website abbykonbass.com. I have also started tracking single #4 and hope to have it out as soon as possible!


Abby K: One word: inspire. I want to be the one to inspire young girls, just like Gene Simmons, Lzzy Hale, and Nita Strauss did for me. I need people to know that regardless of who you are, anyone can rock!