Who are EverGlaze? Introduce us to the band.

Howdy y'all! Currently, the lineup of the band is Joe as the lead singer, Sam Gomez as lead guitar/backup vocals, Adrian as rhythm guitar/keys/backup vocals, Robby on bass, and Panda on drums.

Anything behind the band name? It sounds like it might have some background meaning.
Actually, it's pretty much the opposite haha. We had a really hard time coming up with a band name that we all liked and Panda was talking with some friends on Xbox Live, who happened to be the 'opposite of low' at the time, and they suggested "What about something like forever sweet, ya know? Like doughnuts or something?" Hence Panda thought of glazed doughnuts and the name 'EverGlaze' was born.

The single "Shadows" certainly has a message. Talk to us about it.
Definitely. The lyrics themselves come from a place of self-examination about what's important and how everything is temporal: people, circumstances, events, even life itself, and just really dwelling on that and realizing there must be something more real and meaningful than whatever situation anyone may currently find themselves in. It's really just those kinds of thoughts being expressed out loud.

Who wrote "Shadows", who does most of the writing for the band?
Every song we have is always a collaborative effort. For "Shadows" in particular, Sam came up with the awesome lead riff and presented it to everybody else and then we built upon it and structured it instrumentally before moving on to lyrics. When it came to lyrics, both I and Joe sat down and wrote out the lyrics and sang along to a recording on our phones until we had something cohesive. 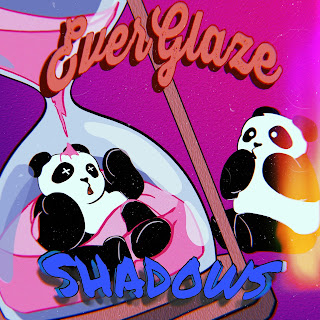 As fans follow the band and are ready for more music already- what's coming?
*SPOILER ALERT* The schedule we currently have in place is to release a couple, potentially three, more songs consecutively over the next few months and then release our first album which we are super excited about!

How does the band approach music?
To put it in a word, thankfully. I truly believe that everyone in the band is just really grateful that we are able to share our gifts and passion with others who enjoy it and don't mind giving their time to listen to us. Not only that but for the countless other artists who came before us that gave their blood, sweat, and tears to share their love of music which really influenced us to pick up an instrument and follow suit. We're just really grateful for the opportunity to inspire and possibly affect people like we had been by their music.

How has COVID-19 affected your band?
Probably the same as many other bands currently, it's hindered us from playing live shows which we all miss. But also in a positive light, it has given us all time to hone our craft and give more focused efforts into writing new songs as well as more availability to record in the studio.
But the biggest impact would have to be how we stay connected with the music community and our fan base throughout the quarantine. I don't think we had realized the importance of an online/social media presence until everything started happening and just what it meant to keep everyone updated and in the loop with what the band is doing and we've definitely made strides in that particular area.

What have you learned from these times that you're using to help create and build your music?
The greatest lesson we've learned through these times is communication. We don't always have the chance to see each other as often as we did before the pandemic so staying in touch and sharing new ideas and plans for the near and far future have become vitally important to maintaining our relationship as a band. It seems like we are a lot more intentional and precise in what we are working on and how we relay that to the other guys in the band because we know we don't have the same availability as before and we don't want to waste the time that we do have when we're able to work together.

What would you like your music to do for the universe?
Honestly, just inspire others the same way we have been inspired. Sam often mentions that it was a really cool experience when we played in Chicago, not just because we played in another city, but because right after we finished a little kid came up to him and asked him for his guitar pick. That same kid keeps up with us on Instagram and has told us how he's bought some guitars and is learning to play. Ultimately, if we can have an impact like that on someone, it makes it all feel worth it.

Where can we find out more about you?
Pretty much everywhere: Facebook, Instagram, YouTube, Spotify, Twitter, Myspace (not really). But we're pretty much on every social media platform that's available to use and we hope to see y'all soon.