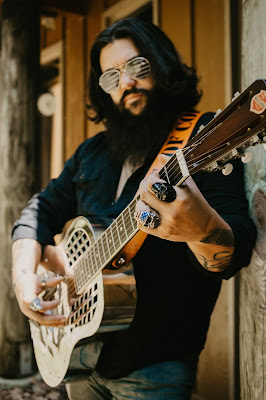 First of all, thank you for your service John. How did you come to music? At what age did you have your first instrument?
John Eason - I come from a musical family, everyone plays or sings, my family even used to tour and play Gospel, it's rumored that I was conceived at a Bluegrass Festival. Well I've been stealing my dads' guitars and making up songs since I could walk, I got my first real guitar though when i started deploying to Iraq
Was playing something that came naturally to you and writing as well?
John Eason - Playing def was not something that came naturally for me it took a lot of work and continued work, lots of folks in my family can just pick up a guitar and play i just didn't get that gift. Writing is a little different but just like anything the more you do it and the more you practice it the easier it becomes and you find your on style and rhythm.
Are you partial to a certain brand that you play?
John Eason - Well I play a few different brands on stage because of the different sounds, my go-to Acoustic is a Martin named June and they make a damn nice guitar, my 2nd is an Ibanez Semi-Hollow Body named Ruby I had her rewired to fit my style and she gets a great growly blues sound, and last is Stella a National Tricone Resonator guitar she has a very special swampy old school bluesy sound that you just can't match.
How do you use music? Is it for yourself or is it for the audience?
John Eason - Music for me is where I find peace I write what's in my heart and in my soul it honestly one of the things that have saved me from my PTSD, but as an entertainer I do it for the crowd to connect with them or just have that one person walk up after a show and tell you how much one of your songs touched them. It's such a great feeling being on stage and feeling the crowd's energy go up and push you on to new heights.
Talk about your latest single "StandUp" What is behind it, why did you choose to drop it on 9/11?
John Eason - Well being a veteran seeing people disrespect our flag and our national anthem burns me up intentional or not, you can kneel all you want but not during that time, plus I see the disrespect towards our flag and our nation out there right now and it hurts my heart. So we wrote this song as our answer to these things Myself, Zach Henard, and Mike Kuhl.
As far as releasing on 9/11 I remembered how everyone came together after that tragic and horrible day and i just hoped maybe this song would remind people a little of the patriotism we felt.
Going forward John what are you looking to do with your music and songwriting?
John Eason - I mean just like most people who pursue music I wanna make a career of it, success in the music industry is not easy and I think it's very subjective as well. There are different levels I mean I have songs out for the world that's a success, I'm traveling around the country playing my music for people and paying my bills that's a dream come true for me. Would I love to achieve a larger level of success and travel in the footsteps of my heroes of course but until that happens i'm making real music for people who wants something real and I'm living my Gypsy Dream.