Interview with Chad Griffin of the Band Awaken 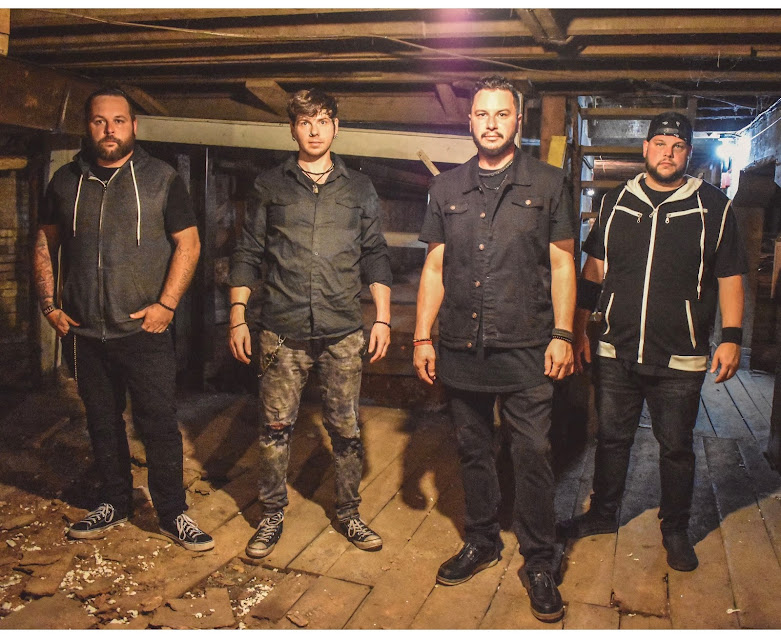 I’m Chad Griffin and I play the mic

Chase “Sludge” Reagan is on bass

and Jimi Wilkins is behind the set.

There is a sense of faith and belief in what you produce. How much of that do you want coming across and how much do you want the audience just rocking out to hard rock sounds?

Faith is the foundation of what our message is based on. It’s the core of our personal journey as individuals while we hold the instruments and speak the words being said. We love people rocking out and try to put out the type of music that we love and personally rock out to as well. The most important thing to us is for people to take away more than just the sound of the music, but get the whole sense of each song and the message it portrays.

The single "Behemoth" certainly has a message. Talk to us about it.

Behemoth sets up part of the theme for a lot the new album with dealing with inner monsters and overcoming certain struggles everyone must face. It’s a raw cry out to God for help in the midst of human struggles.

Do you work with anyone on songwriting? How does the process work for you?

Dustin and I usually do the writing. He puts all the music together and I come in with the lyrics and vocal arrangements. We are open to collaboration and have worked with Trevor McNevan, Zahna, and just a handful of featured artists. We give them freedoms on writing the lyrics they feature.

What is your approach or plan for making your music?

Dustin will usually lay out a song. Format out the music from a riff he’s come up with. He will piece all the parts together and structure the verses, choruses, and other parts. He will get a basic idea of where he wants it all to go musically. Then I will come in and generally come up with a hook melody first then branch off to the verse and other parts of the song with lyrics I usually pick from that I already have written out. If lyrics I have don’t fit I’ll come up with new ones for a better fit.

What solutions have you as a musician found to cope with Covid and still make your music?

We wrote our whole new record cause of it, so I guess you could say it’s actually helped us, ha. We’ve also taken the time to do other things like work on website stuff, do live acoustic versions for fb and YouTube videos, and worked out a deal with The Label Group and INgrooves for distribution and campaign plans. It’s actually made us busier in away.

Basically that you can always find a way to see the positive and possibly take advantage of tough times by letting yourself try different things. It’s kind of a nature in us to get trapped by doing the same things or taking the same avenues and expecting different results. We’ve learned to take different routes that this time has given us and it’s already taken us farther into our journey than we could have expected us to in these few months without even being able to get out there on stage. We are thankful for it, but definitely ready for the craziness to be over at the same time.

A new website is launching, a music video that we were able to get knocked out is also coming very soon. We are very excited for everyone to see that. Multiple singles timed to release a few weeks apart, and our new album “Monsters & Machines” with possibly 2 more music videos that are in the planning phases. After that, we plan on booking shows locally and regionally for starters once everything gets back to going.

Give people something different than the norm or usually they would hear on rock radio. That is not coming down on other bands, or what they choose to do with their art. We just don’t want to fall in line with necessarily a typical sound or something people could just say, “oh, there’s another song about a break-up.” or get our album and it sounds like one long track where everything sounds the same. We want to bring to the table a diverse sound with something possibly for everybody on the record. We also want people to get something from it on a deeper level and really be able to dive into what’s being said that could help what they may be going through or struggling with. Keep them going through crazy times and give an outlet to enjoy and rock out to... but take something from it that could stay with them forever.