Interview with Dax Dabs of Above Snakes 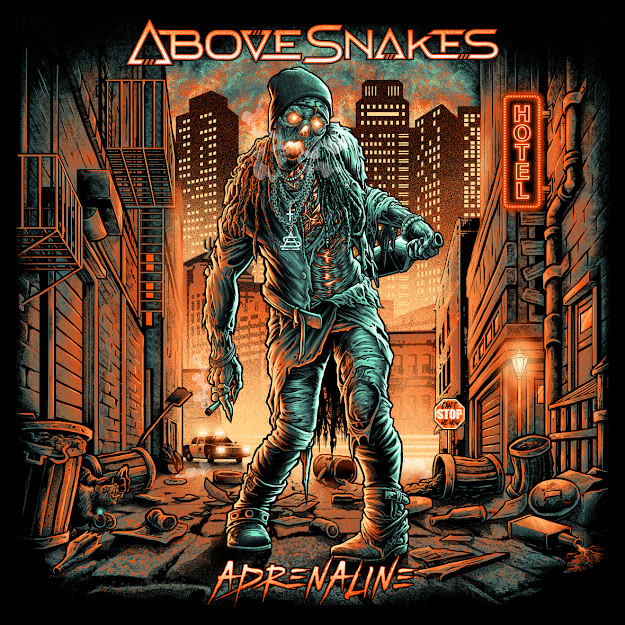 Talk about how music has influenced you each individually in your

Like the lyric in our debut single Adrenaline what I

need, it's how I breathe! From the time I was very young I've

what mood I was in, with music I could always find a place

where I belong, which is what we set out to do with Above

Where do you each find yourselves listening to music most often?

Octane all the time, especially in the car and in the van on

instruments, mics, amps, pedals, and so on? Why do you favor

I proudly use PRS guitars, specifically the 277 baritone

model, I currently have two in fire red and charcoal burst, I

absolutely love the way they play and they stay in tune

Power Rack which is loaded with every tone imaginable, and

song it&#39;s very convenient, and don't have to worry about

head guy!!! With pedals, I don't use that many live but I do

love to collect Vintage BOSS pedals MIJ (Made In Japan)

along with a couple rare Ibanez MIJ pedals too! For Bass, we

use Darkglass with the Alpha Omega Head, Darkglass cabs,

and Schecter Basses. We also use Darkglass pedals such as

the B7K and supersymmetry compressor pedal, both

Shure including in ears, wireless mics, and Wireless

guitar/bass. For drums, we use a couple different kits from

DW to TMD, and of course our own custom line, Black Label

Talk about your current project. Its conception. How it evolved.

The storyline behind its development or any anecdotes that may

have occurred during the writing/recording process?

and everyone around you was just fake? That’s what living in

Los Angeles was like - and we tried, for two years, but after

seeing how dirty and ego-driven the industry was, we knew

we had to come back to our roots in Boston. And you know

what? We wrote the best music we’ve ever created - we

teamed up with Kile Odell (Fozzy, Awake At Last) for the first

chapter of Above Snakes and just put out our very first

another song coming just around the corner!

Where there any conflicts during the recording process? If so,

how did you as a band overcome them?

- we started creating what would become Above Snakes

years ago. Just the atmosphere and the bullshit of being in a

fake city like LA with fake people, and trying to create

something we felt was missing in rock music, it crushed us.

But we took that and used it to become who we are today.

It’s where we came from, and we want to give people a

glimpse of what got us here.

process of a project?

Honestly creating! Rolling up your sleeves and getting dirty,

really diving deep into it, just being able to work on some

amazing music is really the best part of all this! But touring is

the recording studio and produced?

same time but when we get that feeling, it clicks and we

know we're onto something great and the magic just starts to

currently- where do you see yourself (yourselves) as an

I think we'll still be doing the same things we do now, just on

a much bigger scale. Always writing the best music, putting

together lots of high energy shows, and always talking to

every single fan who takes time out of their day to show us, love. Above Snakes is definitely is a way of life, and we're

going to get out there and always show the world, one by

one, what we're all about!