Interview with Lindy of Gabriel and the Apocalypse 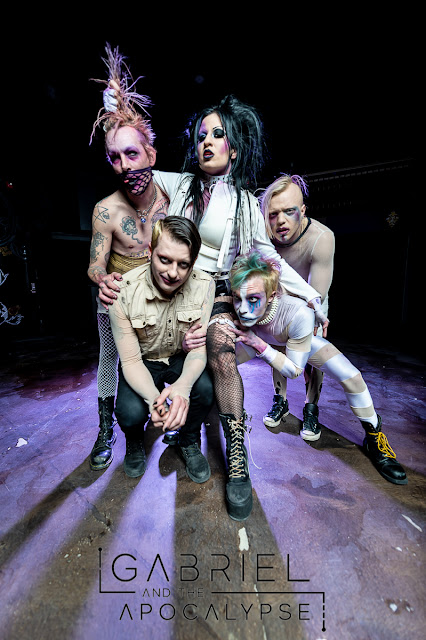 Gabriel and the Apocalypse if you were to sit down and summarize your journey together as a band what would you write?

There is a sense of many layers in what you produce. How much of that do you want coming across and how much do you want the audience just to enjoy the music produced?

Lindy Gabriel:  We put a lot of thought into everything we do. We want that to come across, it's what we are and the audience can enjoy the music and relate to it in their own way. We like to take it further, allowing the music to come to life with all of the layers of art, and thought provoking  imagery connected to it.

GATA decided to do a remix of "Systematic Chaos" a song that was just released in 2019. Why so soon as the original song had not been out that long?

Lindy Gabriel: We did a couple tours to support the record and had many plans to tour to continue promoting the record. With Covid it has changed our plans like so many. While home since the shutdown we promoted the record and released another music video "Electro Mechanical" off of Alpha Bionic but with the new situation GATA promoting Alpha Bionic had come and gone since we are unable to tour.  To breathe new life into the record, we decided to put together a remix EP. Not only would it be a fun project but in a sense it would extend the life of Alpha Bionic. So the remix is a part of a Remix EP that we will be releasing early next year.

Any nuances in particular that you favor from the original to the remix?

Lindy Gabriel: I love the original, it's always been one of my favorite songs. However, I do like the old school industrial vibe that Rick gave the song. It has a nice goth strip club vibe.

How did the connection come about to have Rick Stitch Thomas work on this project?

Lindy Gabriel: Rick worked with us in 2011 when he did backup vocals on Like God. I did a song with Ventana a few years ago.... We've been friends and have enjoyed working with each other. When we decided to do a remix EP we asked him if he would be interested and he said that he would like to do a remix for us.

As a band what is your approach or plan for making your music?

Lindy Gabriel: Typically Jake will write and track ideas on his computer and the band gets together to add parts and then we would send it over to a producer to further polish it etc. We have been talking about changing that approach and trying it out as a group effort for our new material.

What solutions have you as a musician found to cope with Covid and still make your music?

Lindy Gabriel: Oddly enough during these times me personally I haven't written much. I have changed my focus on other things and have been creative in different ways. However, I will be getting back to writing. We have plans for new music and my mind has already been turning with ideas and I'm full of inspiration.

Lindy Gabriel: Not only has it been difficult financially ,but  it's been difficult to keep building since youtube has been cracking down and censoring videos. We were unable to promote 'Burn it Down' on youtube. and Facebook makes it so no one really sees bands content. We are being more personable and offering limited merchandise to keep afloat. We really can't wait until tours resume.

Lindy Gabriel: Well, I always like to keep a sense of mystery. Just know that whatever we do, we put our blood and sweat in. We strive to push ourselves more and more every time. We have so many emotions built up, I really believe it's going to be GATA up a few notches.