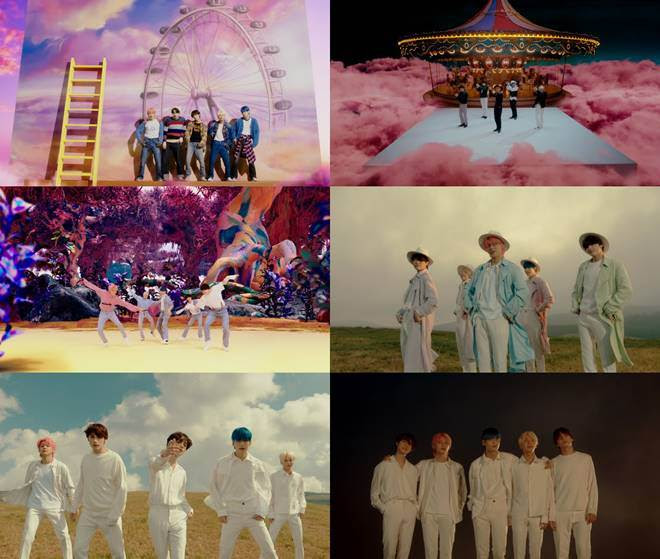 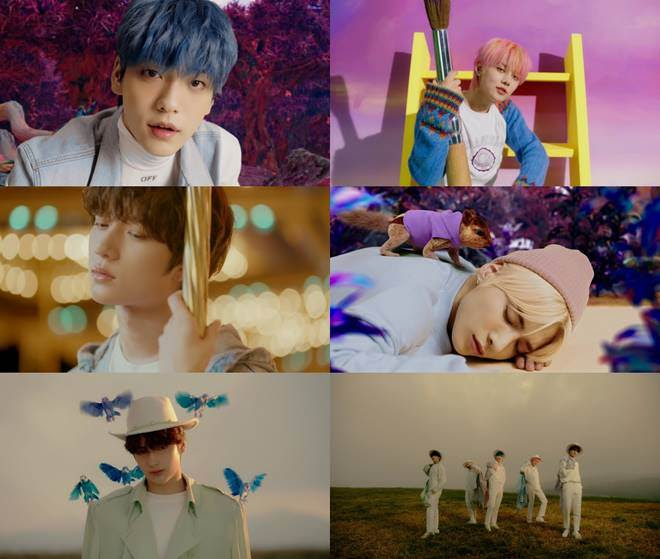 minisode1 : Blue Hour is TOMORROW X TOGETHER’s five-track narrative as they close off their Dream Chapter series to move on to the next. Consisting of tracks “Blue Hour,” “Ghosting,” “We Lost The Summer,” “Wishlist,” and “Way Home,” the EP tells the story of teenagers who navigate through unfamiliarity within their daily lives as their friendships and the world have undergone great change due to the COVID-19 pandemic. The lyrics of “Ghosting” have been written in part by SOOBIN and TAEHYUN, while the lyrics of “Wishlist” have been worked on by YEONJUN, TAEHYUN, and HUENINGKAI, making this EP’s teenage perspective even more personal.

The music video for “Blue Hour” begins with a dreamy guitar riff and vocal hums, depicting the five members of TOMORROW X TOGETHER frozen in time within a spectacular and imaginative fantasy. But the wondrous and lively scene is short-lived, as the splendidly lit merry-go-round soon dims into darkness.

Also notable in the music video is the group’s energetic choreography which utilizes coats and hats to amplify the refreshing charm of TOMORROW X TOGETHER’s unique Disco.

Since their debut in 2019, TOMORROW X TOGETHER has shown rapid and consistent growth into global teen favorites, reaching a new high with over four-hundred thousand album pre-orders. Following the release of minisode1 : Blue Hour and the music video for its lead single, the group will perform “Blue Hour” live for the first time on “TOMORROW X TOGETHER Comeback Show : Blue Hour” at 7 PM KST/6 AM EDT on October 26.

About TOMORROW X TOGETHER
TOMORROW X TOGETHER, read as “Tomorrow by Together,” has come together under one dream in hopes of building a new tomorrow. Composed of five members, SOOBIN, YEONJUN, BEOMGYU, TAEHYUN, and HUENINGKAI, the band is full of bright and playful energy, where each member is different from one another, shining in their own way to create synergy. In just two months of their debut, TOMORROW X TOGETHER successfully had  their first US showcase tour sold out in 6 cities with their debut album, The Dream Chapter: STAR. Emerging as one of K-pop’s most highly acclaimed acts, the global super rookies have already cultivated Best New Artist accolades on various award shows, and received nomination in 2019 & 2020 MTV Video Music Awards’ Best K-Pop category.