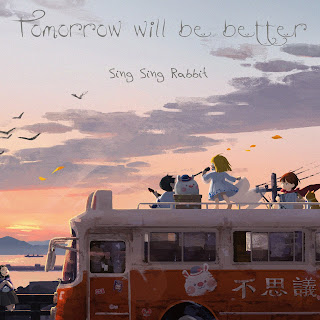 "Tomorrow will be better"

Cross borders with music to heal every soul under pandemic

The Hong Kong singer-songwriter Sing Sing Rabbit, who once successfully trended her first video adapted singer Z-Chen’s May I Love You into a medley of 10 of her favourite love songs on several search engines and received extensive media coverage in Taiwan, now started her Japan music journey cooperating with the Japanese entertainment giant "Yoshimoto Kogyo" last year. On 4th of November 2020, she has officially launched her new single “Tomorrow will be better”. The song describes that the pandemic in 2020 has taken away people’s normal lives. What used to be a normal meeting with relatives and friends has now become meeting each other through the screen. The streets that were once full of laughter are now left with boring colours. The song encourages everyone to overcome obstacles together, we will hold hands with friends again, and the streets full of memories will regain the light of the past. It is a cheering song that brings warmth!

Because of a pandemic, there are no more exciting travel plans. The stores are closed and the shows are postponed... We can only hope for a day to return to our normal lives. In addition to the pandemic, Hong Kong is also undergoing earth-shaking changes. Traditional values are constantly being shaken, which makes people feel heavier. Many people were forced to be separated from other places during this period due to travel control, isolation measures, etc. Sing Sing Rabbit, like everyone else, has not seen friends, family and partners overseas for nearly a year, which for an artiste overseas who is in the middle of developing a music career in Japan becomes even more difficult to promote due to not being able to travel. Therefore, she is very grateful to the Japanese company Yoshimoto Kogyo for continuing to promote her songs in Japan during this extraordinary period. The new song will not only be fully available on the streaming platform on November 4, but will also be available in more than 16,000 Family Mart stores across Japan.

Although the pandemic has made it difficult to meet with people, Sing Sing Rabbit believes that music has the magic power of transcending regions and unites like-minded people. During this period, she received comments from fans all over the world on YouTube, including one fan from Poland––– A place that she has never been to, nor has she thought about how her music can reach. This Polish fan got to know Sing Sing Rabbit's songs through the mobile game Cytus II, and gained positive energy and courage to solve problems! Although she needs to use Google Translate to understand the content of the message of fans sometimes, watching the comments of fans from different countries has given Sing Sing Rabbit more creative motivation. She hopes that after the pandemic, she can go to more different places and meet with fans there.

Starting from 2019, when Sing Sing Rabbit released singles, illustrators from all over the world  was invited to create an illustration for each of her songs’ cover design. This is her "Art & Music" project and she hopes this project will be able to let public enjoy art with sound, so that more people can access different illustrations. For this time’s single “Tomorrow will be better”, she has invited illustrator Lê Phuong Mai from Vietnam to create a painting full of inspiration, hope and poetry in the style of watercolour painting. Several innocent children are touring around the city on the music bus. The Japanese words on the bus "Wonders are waiting to start!" fits the theme of the song and hopes that the song will bring a better message for tomorrow.

Sing Sing Rabbit successfully stepped into the game music industry with her multilingual and diversified music styles. Earlier, Cytus II, one of the most-sought-after mobile games in the world, chose Sing Sing Rabbit for its first partnership with a Hong Kong singer for music and promotion! The song "if.また会えたなら" (If I can See You Again) released this year has once again been adopted in the music mobile game DEEMO which has more than 23 million players worldwide. Hope that more songs from Sing Sing Rabbit will be available in other music games and connect the world as a Hong Kong singer!

Although Sing Sing Rabbit currently mainly composes Japanese and English songs, she has not forgotten Hong Kong fans! In addition to making music, she has to take care of brand business and design creation, she also has to grasp the opportunity of cooperating with a Japanese entertainment company to bring the fighting spirit of Hong Kong singers overseas! She is also looking forward to composing Chinese songs again to give back to local and overseas Chinese music fans. In addition to songs, she often posts videos on social media to communicate with fans. Hope everyone can get a glimpse of Sing Sing Rabbit's views on various topics outside of music! Finally, she hopes to send a message to public, especially Hong Kong people in this period of great changes, don't be defeated by setbacks, she will cheer up you all to overcome difficulties and support each other’s dreams to come true!

Tomorrow will be better
諦めないでと言ったのを覚えてた

Tomorrow will be better
諦めないでと言ったのを覚えていた