A Conversation with Jimmy Wooten Drummer for Gears 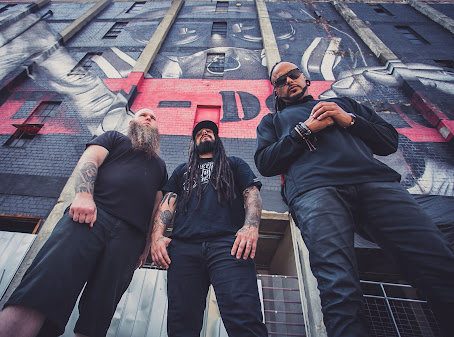 Saul Treno: You have had quite a year with Gears haven't you?
JImmy Wooten: Yessir!  I think we all have.  The diplomatic thing to say here would be the "interesting" times we live in right now.
ST: How has the band managed to keep their sanity and passion going for music through everything going on?
JW: We all have some other things that we're into and being able to spend time with our families is a plus.  We have just been doing our best to keep making music and preparing content for our audience to enjoy.  Of course, there is the hope that we will someday soon be able to hit the road again, but as we don't really control that in any way, we just have to hope.
ST: You have released two single only this year, correct?  Which song that you have released so far has been your favorite?
JW: That is correct. Well, one single and one cover that is packaged as a single.  I wouldn't say that I can have a favorite. Naturally, creating original work and putting it out is rewarding in a different way than a cover.  Overall, the response to both has been very positive! STRONGER THAN PAIN has been our most successful original to date, so seeing the audience and interest grow with each release is amazing.  In addition, the response we have received from our cover of BORED has been amazing.  Releasing a cover of such an iconic song, you really open yourself up to a lot of criticism that could be both negative or positive, but I am extremely pleased to say that the positive response has far outweighed the negative.
ST: Thinking of playing live... Do you have a personal favorite track you like to play live? Is it different sounding from the studio, or do you all keep true to both sides?
JW: I have several!  I love the freedom you have playing the songs live.  You can feed off the energy of the audience and vice versa. I don't know that anyone else shares this point of view these days, but I have always said, "if I wanted it to be just like the record, I'd just stay home and listen to the record."  Whether it be an improvised vocal section in the middle of SEASONS that Trip does or an extended middle section in TAKE AWAY right before we drop the breakdown, I think it's very personal and unique to each show.  Allows for a little bit of personalization to each performance.
ST: Talk to us about the recent release "Bored".
JW: BORED has just been a song that we've always dug as a band.  We've been covering the song since the band's beginning years ago.  It always seems to get a great response and allows us an opportunity to connect with the audience as fans. After years of doing it, I think someone suggested that we record it, so we did.
ST: Covers can be tricky sometimes. How did choosing a Deftones track come about?
JW: Very tricky.  We've only ever done 2 covers and it definitely isn't for the thin-skinned. As I mentioned before, you open yourself up to a lot and you can't take it personally.  I guess the main thing that made the choice to record the song was that we always seemed to get a pretty good response from doing it live.
ST: Was there any band discussion prior to the song being recorded that you went through on how you all wanted to approach and produce your version?
JW: Other than tuning and key, not really.  We played around with it a bit and just let it come to us organically which was really cool because there wasn't the whole "did we change it too much, not enough, does this do the song justice" argument. I think it came out great in that sense.  No, I don't think it is "better" than the original and that was not the intention. I mean, I just don't think it's possible to do any cover "better" than the original.  I do think we did a pretty good job taking a song that we love and giving our interpretation of it.
ST: What are Gears on track for this New Year? And plans coming with a release?
JW: WAITING.  Just waiting for this world to hopefully return to some semblance of what it was before so we can tour.  We have a bunch of new material that we're excited about ready to be released, so keep an eye out for that!
ST: Sign us off this year with some of your reflective thoughts over 2020.
JW: Appreciate what you have and live in every moment.  If I've learned anything from this whole ordeal, it is not to take anything for granted because at any moment, it could be taken away.  Thanks for having me!
Deftones Gears TLG Entertainment