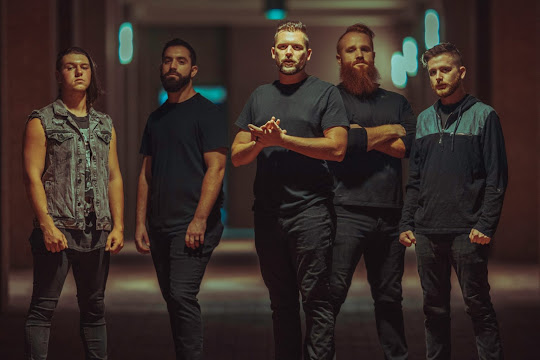 It's a guarantee that 7 Stone Riot will become big. If you haven't take a listen to their music yet, it's way past time to check them out. These professional musicians take their sound of hard rock seriously. "Manipulation" certainly lights all the elements musically and lyrically. You get where the band is coming from and you want to belong to them- all the way along. 2021 just may be their year!

Saul Treno: You have had quite a year with 7 Stone Riot haven't you?

Whit Millsap: We have. There been a lot of planning for the future and also the best way to go about releasing our newest single "Manipulation."

ST: How has the band managed to keep their sanity and passion going for music through everything going on?

Whit Millsap: Even though we haven’t been playing many shows this year it has given us a lot of time to write and to figure out different game plans moving forward.

ST: You released "Manipulation" recently, any surprises along the way?

Whit Millsap: We did all of the tracking ourselves in our guitar player (Reid Aldridge) garage. We’ve always wanted to be able to do that to have the capability of releasing songs when we want. We were pleasantly surprised about how it all turned out.

ST: How easy or complex is songwriting in general and when performing live have you ever forgotten the lyrics or melody, etc?

Whit Millsap: All of our favorite part about being in a band is the songwriting process. I feel it is both easy and complex. There are parts that come to us easily and then there are parts that take weeks to get it the way we want it. Songwriting is a long process that takes a lot of attention to detail and then rewriting and rewriting. To us, it’s the reason we’re in a band.

I definitely have forgotten lyrics before but I don’t think I’ve ever forgotten a melody. The melody in a song is my favorite part about songs.

Whit Millsap: We like to keep all of our live songs sound as close to the studio as possible. Even though we haven’t played Manipulation that much live it’s one of my favorites to play. We tested it out live early this year before we even considered releasing it and it got a really good response from the crowd. I think once I looked down and people were picking them selfs up from falling over the barricade was when I thought maybe we should release this song.

ST: Talk to us about the recent release "Manipulation".Take us on the road it traveled.

Whit Millsap: We started writing this song in December of 2019 when it started out as a guitar riff. We like to write our songs in parts and then put them together once all parts are written. I think the first part that was written in this song was the chorus. Once that was done we started the melody and lyrics to the song. This song went through 3 different chorus melodies and about 5 different verse melodies before we got to the final version of it. A lot of the final form of the song was taking our favorite parts from the previous melodies and then mixing them together. Once we got to the melody we liked we then went back and made the guitar parts fit better to the melody. One night I was sitting in my room and it popped in my head that it would sound sick if we could find an opening track of a cult leader saying something because the most manipulating people are cult leaders. We then stumbled upon an interview with Charles Manson and right as he said “Jesus is coming back everywhere and nothing can stop it, it’s the consciousness that lives in your mind,” we all looked at each other at the same time and said that’s it. After that then we went to a studio close to us called Bates Brothers Recording and we laid down all the drum tracks. Once we had everything tracked and ready to go we sent it to our proceed Ken Lanyon in Stone Mountain, Georgia to put his magic on it and mix it. When the song was done we thought there’s no way we can release this and not have a music video to go with it. So we called up our friend Brandon Jones who does amazing video work and started planning up what we could do with the video. We wanted to give it a phantom or the opera feel to it and make the viewer feel kind of disoriented and confused. We were all very pleased with the final product Brandon did. We felt it captured everything the song was about.

ST: Is there normally any band discussion prior to a song being recorded that you all go through on how you all wanted to approach and produce?

Whit Millsap: Not necessarily, we usually sit down and start riffing on guitars until we find something we like. While the guitar players are doing their thing I sit in the back and start humming melodies and trying to figure out what topic would go best with the way the guitars sound. It’s usually something that kinda flows together.

ST: What does 7 Stone Riot have on track for this New Year? And plans coming with more music, a re-release perhaps?

Whit Millsap: Right now our game plan is to write as much as possible. Our plan is to have a new release sometime next year. We also hope that venues start opening up and we can start playing shows again. If that’s the case then be on the lookout for us coming to your city!

ST: Sign us off this year with some of your reflective thoughts over 2020.

Whit Millsap: 2020 has been a huge learning year for every single person alive. There’s been a lot of crazy stuff happened and a lot of time to sit back and figure out how you want to spend the future. I feel like once it’s all over music and anything that has to do with art is going to be huge. People are itching to get back out there whether it be someone who goes and sees shows or someone who is performing.