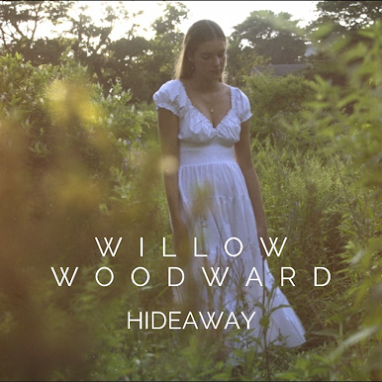 Los Angeles, CA - Following up on the breakout success of her debut singles “Superman” and “For the Love,” singer-songwriter Willow Woodward returns with her first album, Hideaway, available now.  The nine-song collection spans Willow’s broad range of musical styles and influences, touching on dance, bop, country and indie ballad, while at the same time holding true to her pop roots.

The album opens with the upbeat anthem “Out of the Shadows,” a metaphor for the album’s journey, which has Willow belting out on the song’s triumphant chorus “You can’t hold me back!”  Songs of love, longing, heartache, forgiveness and joy follow, as the album winds its way to a surprising conclusion – the country-flavored holiday teaser “Christmas in July.”  The enchanting, acoustic-guitar ballad, which recalls Kasey Musgraves and Colbie Caillat, seems destined for holiday playlists everywhere.

The success of her debut singles impressed industry watchers.  Released in July, “For the Love” reached #122 on the Global Top 200 digital radio chart and was spun in heavy rotation around the U.S. on iHeart Radio, the country’s largest radio broadcaster.  Earlier in the year, her single “Superman” was heard by an audience of over 1.4 million on digital radio.  Willow is now signed with Sapphire, a subsidiary of Sony Orchard.

Hideaway is the result of two years of meticulous effort from Willow in writing the lyrics, arranging the melodies on her piano and working in the studio to get the feel of each song just right.  She explains: “After writing the songs, I took some time before recording to play them for lives audiences, allowing them to breathe, grow and mature.  By the time we went into the studio, I felt like the songs had been fully brought to life, and I’m excited now to share them with a broader audience.”